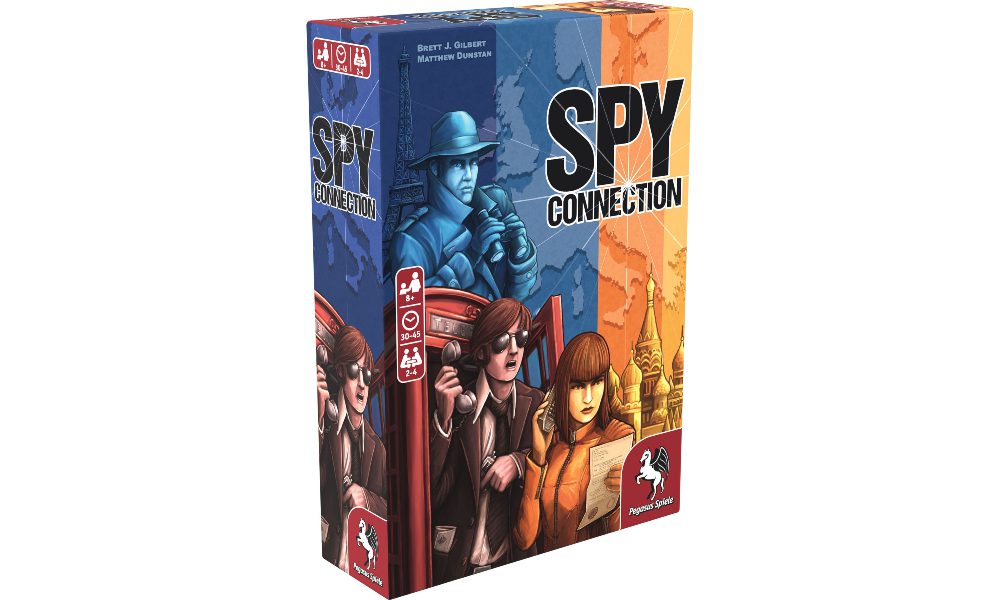 Spy Connection is a board game from Pegasus Spiele, published in both English and German. This game takes 2-4 players on an adventure through Europe, building connections between cities to let spies complete missions from country to country. There are two variations of the game, giving players an opportunity to make the game more challenging if so desired. It’s a game that requires strategy, however the skills needed to win the game mean very little when it takes skill to understand the game.

The goal of Spy Connection is to create a network of agents to let the player’s spy travel through Europe. The game starts with each player receiving a Start Mission card with four locations and the number of agent disks that correspond with the level of the game being played. On each turn, players can accept 1 new Mission, connect 1 new City to their network along with moving the Spy to the City, or move the Spy to another City on the network. When a Mission is chosen, the player draws one of four cards on the side of the board and places it with any other open mission cards. To connect a City to an existing network, an agent disk is placed on a connection point. If a complete connection is made, the Spy can be moved to the new City. Moving the Spy to another City on the network is exactly as it sounds – move the Spy to a city that’s been collected.

It’s a rather complicated game for such a simple concept. The game really tries to make itself understandable by giving examples for the game play. Unfortunately, the examples do not clarify what a player is supposed to do or why they’re supposed to do it. In fact, when playing it with friends, the entire experience was questioned. Why is there a distinction between spy and agent? Why have a spy when an agent is required to be on each city location to indicate what cities have been connected? Does the spy have to spend several turns jumping from the cities on their mission card if they’re all in network? Can the spy simply fast travel to cities on the network without traveling through cities that are on the same path? Does the start mission card have to be completed first? Who wrote this game? Can they call me back and explain why they did this?

The game ends when a player has finished 7 missions and the winner is the person with the most victory points as indicated on their mission cards. During the play through we ended the game after half an hour of confusion by one person completing their start mission card. We didn’t know if we played the game correctly at any point and all of us were experiencing varying levels of frustration with the entire experience.

Spy Connection plays like a school project, as if someone in a high school Advanced Placement class for a European language was tasked to create a bilingual game. It’s not explained well in either language – I double checked with a translator tool to see if it made more sense in German. It does not. In American pop culture ‘agent’ and ‘spy’ tend to be used interchangeably so that could explain one piece of confusion, but all the other questions weren’t explained no matter how many times I read the four pages of instructions.

The game is well constructed. The four character colors stand out strongly and the mission cards are sturdy. The board design is sleek, with the map accurate to country size. The spies and agent pieces are thick and don’t fall over or move around on the board. One pet peeve was the fact that the agent disks had logo stickers, but all 60 logo stickers had to be individually stuck to the disks. I didn’t bother.

Spy Connection could have been a fun experience. Unfortunately, the instructions were unclear in enough places to make the game feel pointless. None of us wanted to play to 7 complete mission cards because there was nothing about the game that made it seem worth figuring out. The mission cards don’t have real missions – they just have locations to go through. This could have been any sort of travel game – the fun behind being a spy who has to discover information or transport things was completely absent from Spy Connection. Instead, the empty-hearted game leaves players trying to discover why they chose to play it in the first place.

Spy Connection can be picked up from Pegasus North America for $32.99.

In this article:pegasus spiele, spy connection, Featured, board game