I have already argued that Sleeping Beauty is Walt Disney’s feminist masterpiece. But now it’s time to argue for something else…

At first glance the movie seems to be a typical fairytale. The beautiful princess is in a cursed slumber, and the prince must save her with True Love’s Kiss. However, upon further inspection of characters and a few coincidences one can discern the true nature of this animated movie. It is, in fact, an alternate version of Westeros. It is the story of A Game of Thrones played between the Houses of Lannister, Baratheon, Targaryen, and most importantly, the Blackfyre pretenders. This is most obvious in characters’ visual traits.

King Stefan is certainly a Baratheon. Specifically he is Steffon Baratheon, although probably not King Robert’s father. He is dressed in bold black and yellow robes, trimmed with gold, and his hair is dark as jet. Though not easily moved to anger, Steffon can and will fly into a frothy rage. He threatens war against King Hubert (who we will get to later) when the latter suggests that Steffon would make a poor grandfather to their future descendants. He loves to drink, especially if it is not his own.

He even begins the movie by proclaiming a holiday and inviting every man, woman, and child “… of high or low estate…” to his castle for his daughter’s christening. Almost all of these traits are the hallmarks of House Baratheon. Another obvious noble is King Hubert Lannister. Though his hair color has faded, the paleness of it suggests he might have been blond once. He is decked in head to toe with scarlet and gold robes, their volume is evidence of the extreme wealth of the Westerlands, as is Hubert’s weight. Seven hells, Hubert even has the money to build a brand new castle for his son and daughter in law. He calls the castle (which he says has “40 bedrooms” and a dining hall) a “honeymoon cottage.” Hubert is also quick to come to blows when his honor or the honor of his family is questioned. He tries to beat Steffon with a fish after Hubert assumed a slight against his son, Philip.

Together, the Lannisters and Baratheons of Disnesteros hope to join their houses in marriage. Both have only one child, and the combined the might of the Stormlands and the wealth of the Lannisters would make a powerful alliance. Powerful enough to even challenge the mighty dragons of Old Valyria, House Targaryen. Why would the ever watchful and often suspicious Targeryens allow such a merger to take place? Because there is already a Targaryen on the inside to make sure that the royal interests are safe: Yes, with her golden-blonde hair and dark robes, Queen Leah is Blood of the Dragon, and her daughter will be after her. Aurora herself has hair even paler than her mother’s, and her eyes are constantly cited as being purple in color. The children of House Targaryen are always charged to maintain the peace and surety of their parents’ rule. Under the watchful gaze of Queen Leah, the other Targaryens can be assured that no treachery is afoot. Besides, the children of Aurora, thus the grandchildren of the reigning Targaryen monarch, stand a chance to be married back into the fold. Thus, through another marriage, the Targaryens would cement their control over both the Stormlands and Westerlands. They play the game well.

Of course, one could argue that there is too much magic in this story for it to take place on Westeros. However, let us not forget that magic is alive and well in the world. The sorcerers of Qarth know it, the Alchemist Guild in King’s Landing uses it to make wildfyre, the Maesters maintain Valyrian candles that still burn. Even beyond The Wall there is magic, and it is this magic that is used for the young Princess Aurora. 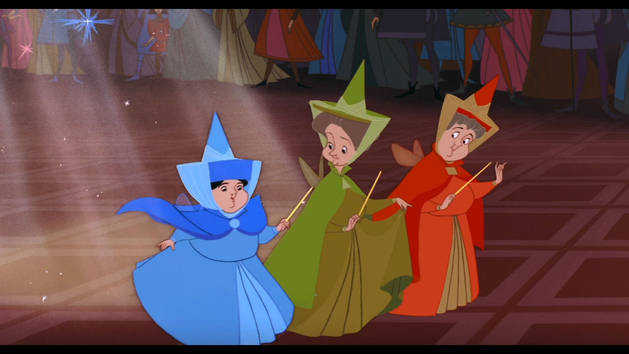 Yep, that’s right. These three feminist badasses are Children of the Forest. The Three Good Fairies are very short even though they seem to be of an advanced age, just like the Children. Their names are indicators of their true nature as well. “Flora” means flowers, “Fauna” means animals, and “Merryweather” is… good weather. All the Children we have met so far have been named for the natural world, and this keeps with the theme.

Of course this all leaves us with one final question. Who is Maleficent?

She is a member of the Blackfyre family.

Black robes and purple accents are not far off from the blacks and reds of the Blackfyres. Those of Old Valyria are known to have a deep connection with magic. Brynden “Bloodraven” Rivers, a Targaryen bastard, was said to have dabbled in the magical arts, allowing him to listen in on any conversation and find the king’s enemies before they could strike. Maleficent just studied more, locked up in her castle. She skinchanges with her raven, Diablo, so much that the raven has become intelligent. She even is associated with the dragon; much as the common folk said that Robb Stark could turn into a wolf, some say Maleficent can turn into a dragon.

More than ever, Maleficent has a reason to disrupt the potential marriage of Aurora and Philip. An alliance that strong, and under Targaryen control, would make a Blackfyre invasion from Essos simply unfeasible. Even with the last dragon remaining to House Blackfyre, the alliance is too great to surmount. We have already seen how tenuous the alliance is, as Steffon and Hubert come to blows over a drunken quarrel and threaten war on each other. All Maleficent has to do is disrupt the alliance and Disnesteros will tear itself apart with civil war.

Alas, Maleficent’s plans come to naught. Philip proves himself a true member of his house:

A Lannister always pays his debts.

And if all of this doesn’t convince you, perhaps the most obvious reference to the true location of Sleeping Beauty is a brief line from Flora, as she makes her plans to preserve the Baratheon/Lannister/Targaryen alliance: “Even walls have ears.” It’s downright chilling.

In this article:Game of Thrones, ASOIAF, Disney, GoT, A Song of Ice and Fire, sleeping beauty, Disney's Sleeping Beauty