Jughead Has A Birthday and Riverdale Is Great Again After two not so good episodes, Riverdale got back to what makes it great to watch: the teenagers. “Chapter Ten: The Lost Weekend” focuses on the core gang. Veronica is upset with the statement she is supposed to give on her father’s behalf, Archie is still sad about his break up with Val, and Betty’s relationship with Jughead is hurt by her wanting to throw him a party.

So, we start off with Mr. Andrews going out of town for the weekend to finalize the divorce papers with Archie’s mom while being sad about missing Jughead’s birthday. Jug, however, is not keen on celebrating the day; he hates it. The Lodge’s lawyers come by to help prep Hermione and Veronica for the statement on Hiram’s behalf, but Veronica is adamant about not giving one. She doesn’t want to lie even if the statement is just one about Hiram’s character and not his business.

Betty and Archie tell Veronica about him overhearing Mr. Blossom being responsible for sending Hiram to jail. Archie breaks the news to Betty about the next day being Jughead’s birthday. Even if he hates his birthday, the fact that Betty didn’t know about it feels odd considering that she has supposedly been friends with Jug for years through Archie. Still, Archie says the duo usually go to the movies to celebrate it on the down-low, but he feels like Jughead should go with Betty instead since they’re dating now. 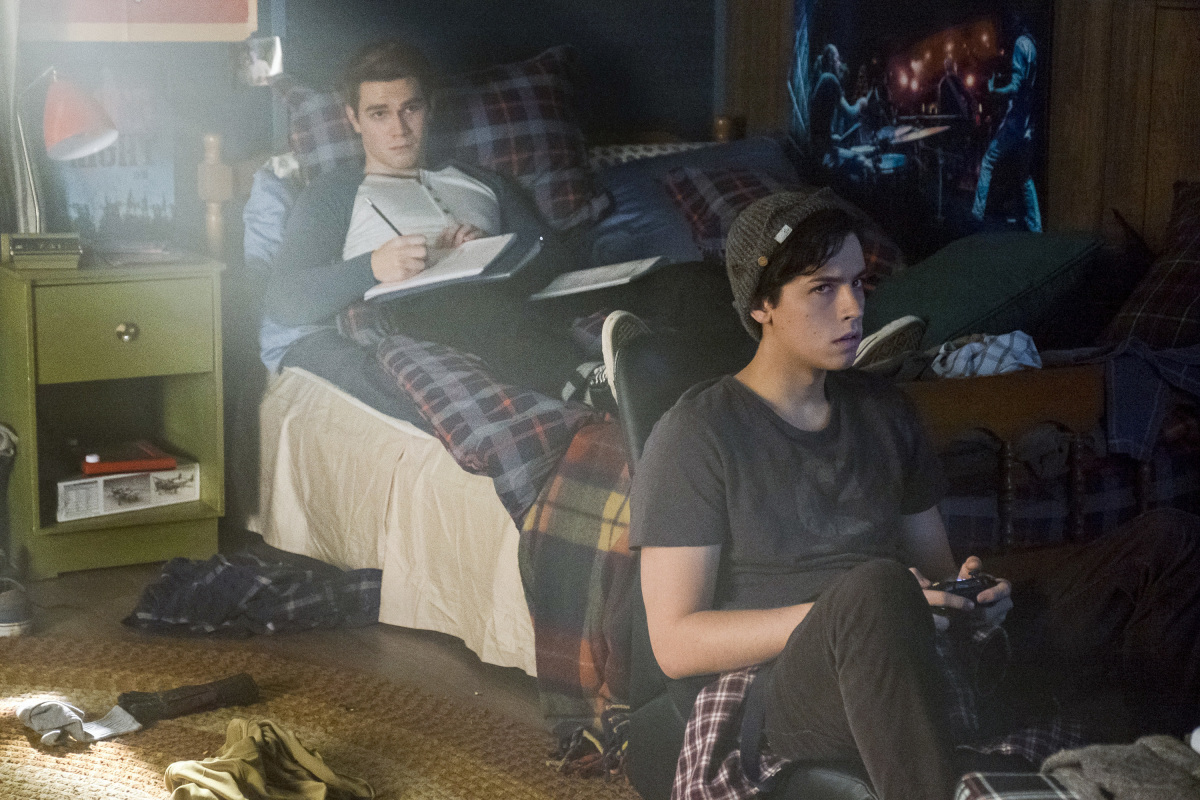 FP Jones receives a call from Betty. She asks him to join in on the movie plans and even dinner. However, Mr. Jones declines because he knows his son hates the day and would rather be left alone; he even tells her that Jug never had a birthday party. Naturally, she immediately starts talking to Veronica about throwing him a small party for the inner circle.

However, the planning is interrupted by Chuck’s arrival at the school (apparently, he had been suspended, but that happened in Chapter 3, so the bigger question here is how much time has passed in universe?). He goes to talk to Ethel. Betty heads over to their table with a look that implies she’s aiming for his throat, but gets defused by Ethel, who says Chuck was there to apologize. Still, Betty got so angry that she clawed nail marks in her palms.

Betty meets FP to personally ask him to come to the party. She also talks to her mom about whether or not it is a good idea to tell dark secrets to your significant other. Jughead tells Archie that he started hating his birthday because he felt lonely in his childhood when, for just one day, the overwhelming tension went away in his family. Veronica channels her inner Jessica Jones and investigates her father’s documents looking for something that might explain Clifford sending him to jail. She find a monthly fee that the Blossoms have paid the Lodges for seventy-five years and stopped as soon as Hiram went to jail. This could be interpreted as reason for Hiram’s imprisonment, but could also implicate him in Jason’s murder, so Hermione tells Veronica to drop it.

Naturally, Veronica doesn’t quite let go of the subject. Instead, she focuses her anger on Cheryl by challenging her position as the River Vixens’ cherry on top. They have a dance-off that renders Veronica champion and Cheryl, a tuned up version of her usual moody/asshole self. Thus, she goes to Chuck to partner up and rain hell on both Veronica and Betty by crashing Jughead’s party.

Veronica tells the lawyer his theory about Clifford/Hiram and how it makes her want to make the statement even less. He brings up a letter from Hiram to Veronica that basically says if Ronnie won’t cooperate, Hiram will bring Hermione into the fold potentially incriminating her. 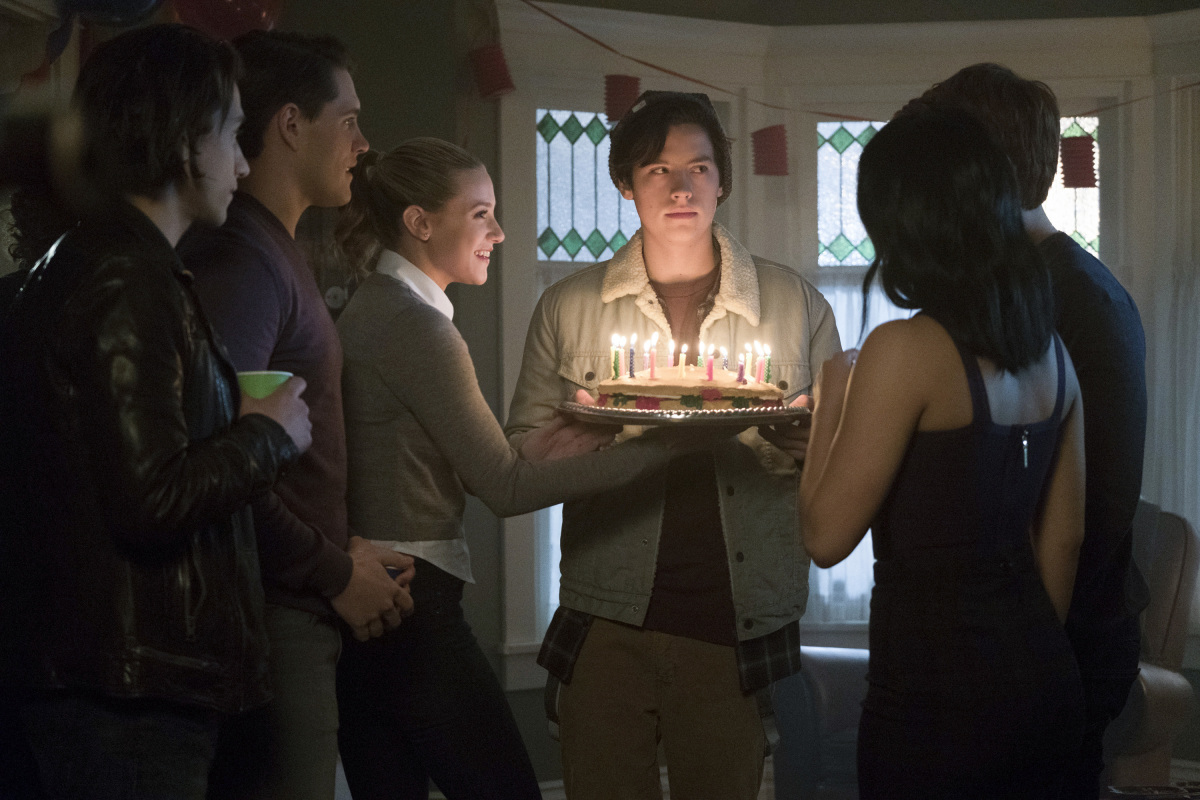 So, Jughead hasn’t even arrived and Archie is pretty drunk already as he is suffering from their parents’ situation. The inner circle — which includes Kevin’s boyfriend and Ethel, nice — surprise Jug who is not pleased with the party and makes it clear that he wishes it were just him and Betty. Archie bonds with Veronica over their issues and liking for alcohol. Jughead has a mild argument with Betty about him not being “wired to be normal” (the subtlety in dialogue has left the premises, be warned). Chuck and Cheryl arrive with a huge crowd and Archie declares the party a kegger.

FP arrives and meets Jughead hiding in a room with a KEEP OUT sign. Kevin and Joaquin are making out hot and heavy, but FP interrupts it to talk to the Serpent. He reveals he heard about Clifford possibly getting Hiram in jail, which is less than ideal given Hiram’s business with the Serpents. Oh, and Alice snoops in on the conversation with binoculars.

Betty also argues with Chuck, who is pissed that the suspension has possibly taken away his chances of playing football at university. Yet, here comes the best line of the episode:

“I’m sorry that after you sexually harrassed those girls, that there were actual consequences, Chuck” – Betty, sarcastically.

Chuck also implies that he gets off on thinking about “Dark Betty”.

Jughead explodes at Betty not only because of the party, but also because of how different they are ‘on a cellular level’. He says they are on borrowed time. However, the kicker that really putts Betty off is Jug’s comment that Betty would go running to Archie in a heartbeat. Speaking of, Archie is not having a great night either. His attempt to reconnect with Val goes south, so he drunk dials his father and asks him to not sign the divorce papers.

As Jughead tries to leave, Cheryl shuts him down by saying they are going to play a game now. Ok, this is probably just me, but the fact that Jughead just goes along with it, not trying harder to leave, or that Archie doesn’t kick out both Cheryl and Chuck is simply haunting. They just let people walk all over them. Nonetheless, the game is Secrets and Sins in which they confess and accuse.

Cheryl starts by trying to shame Veronica. She tells everyone that Hiram was the buyer of the drive-in land and wonders what else he is capable of doing from behind bars. Veronica, however, is the one who brings her A game as she implies that Cheryl had incestuous feelings for Jason and killed him after she got rejected. The boy scout from ages ago reveals he saw Ms. Grundy’s car on the Fourth of July weekend, and then everyone finds out about Archie’s “relationship” with the professor. 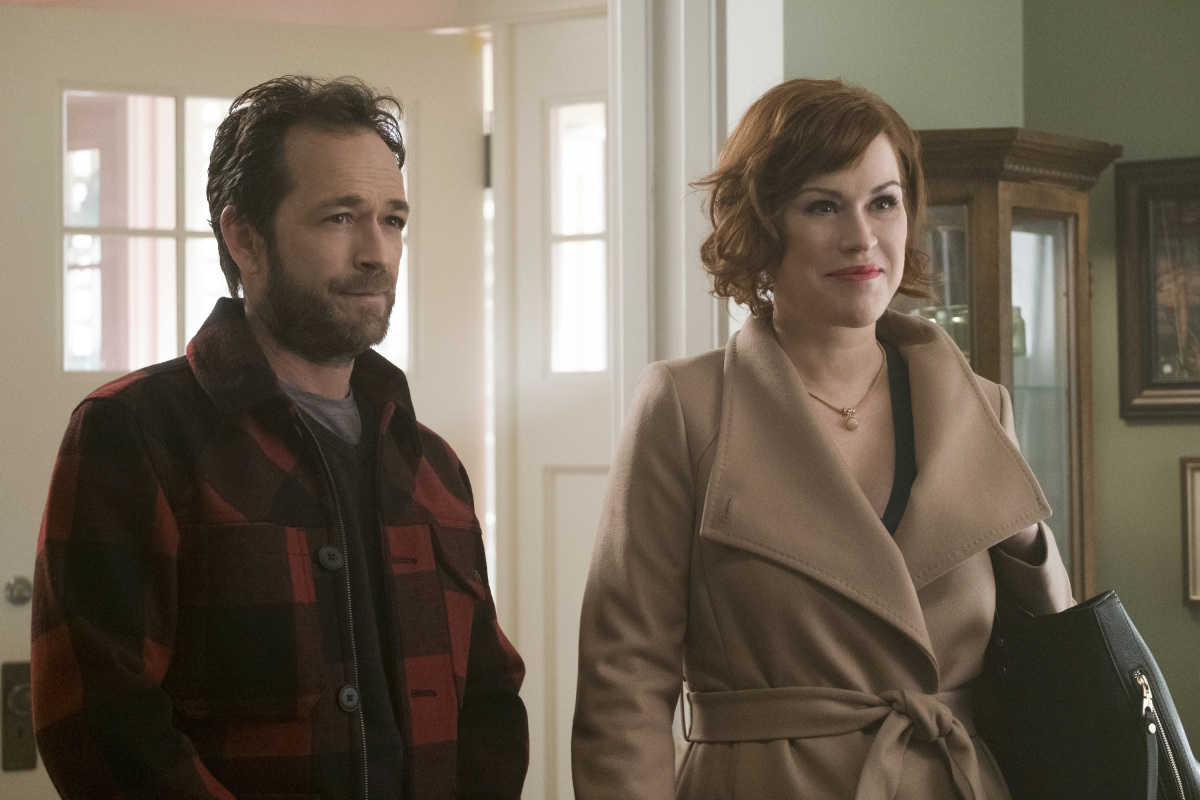 Chuck goes next and starts talking about Betty. He also tells Archie to shut up which, once again, looks terrible when you remember that they are at Archie’s house and party. Chuck reveals what happened in the hot tub. Jughead punches Chuck and FP intervenes, dragging Chuck out and putting an end to the party. FP also tells Jughead not to run away from Betty and his friends. Alice tries to shoo FP away from the neighborhood, and he reveals that Alice used to be a southsider as well.

Betty and Jughead talk at Pop’s about how she has a darkness inside that she can’t quite handle sometimes and does “crazy” things because of it. Archie and Veronica talk more about their issues and they end up kissing — well, she actually spends the night in Archie’s bed, but they don’t sleep together. Jughead even catches her “not-so-walk-of-shame” in the morning, but he says he won’t tell anyone. Mr. Andrews comes home and surprises Archie by bringing his mom along.

Veronica brings coffee to Betty the next day. Betty jokes about how “the last time you brought me baked goods was because you kissed Archie, ha ha” and Veronica basically does everything but look at the camera like The Office. She also makes the statement to the lawyer to protect her mom and tells Betty that she wants to help on Betty’s investigation. However, she fails to mention how she might be interested in Archie… yeah, because this is a CW teen drama show, what could possibly go wrong with that?