In its best and typically campy fashion, Legends of Tomorrow is back with an episode that both advanced the plot and served as a love letter to creator George Lucas and his creations, Star Wars and Indiana Jones.

A flashback gets us caught back up to the time Rip Hunter disappeared. The Waverider is crashing after being hit with the atomic bomb, and Rip is all alone now. He picks up one of the floor tiles to reveal a piece of wood with dramatic importance and then proceeds to apparently put his hand on some sort of spherical thingy that clearly is also very important. 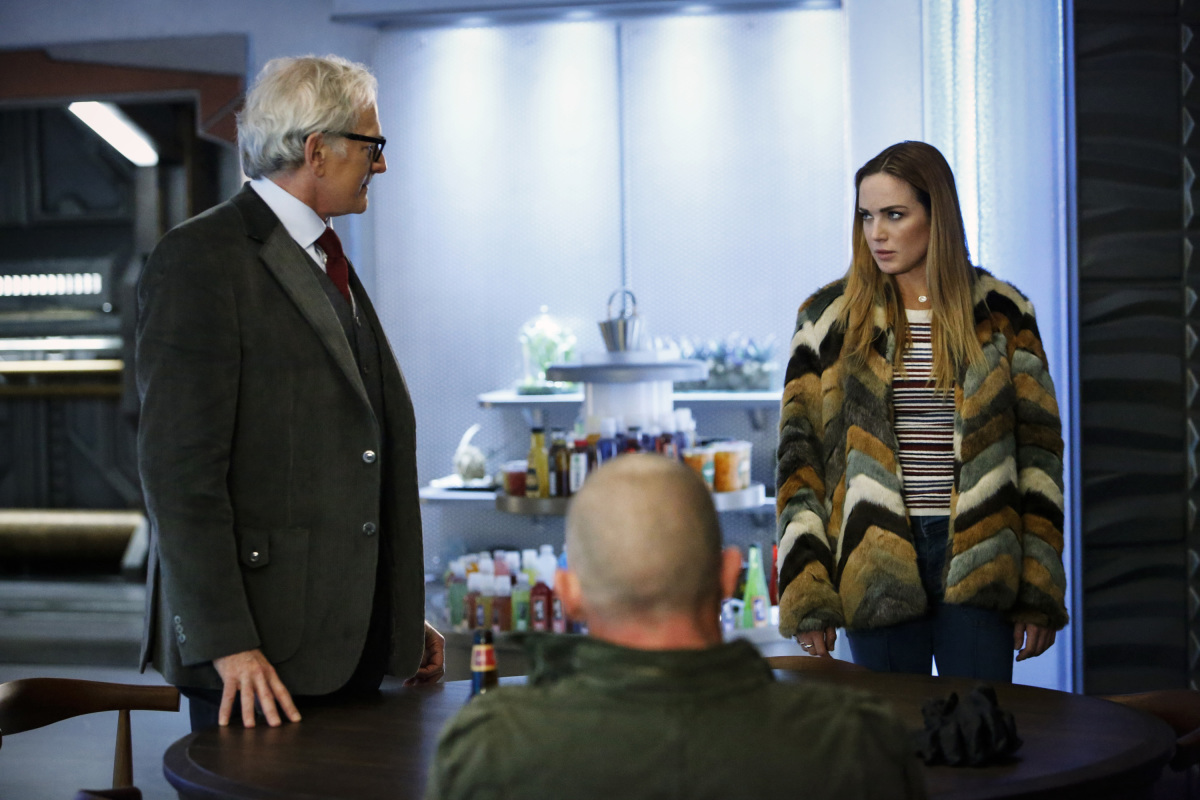 We obviously know what the piece of wood is.  It was revealed in the previous episode that Damian Darhk, Malcolm Merlyn, and the Reverse Flash were going to use the recovered amulet to track down the Spear of Destiny (that same one that pierced Jesus Christ and was part of the plot of Keanu Reeves’s Constantine movie) because it can “rewrite reality”. So, yeah. Apparently, Rip Hunter had that all along.

Now back to the present, Mick is talking to the Ghost of Best Friend Past aka Leonard Snart. Dr. Stein interrupts him and they start talking about what was going on. Mick, who apparently is too good for those so called “feelings” intimidates *nuclear physicist* Martin into making him better. Great plan.

Nate is in his library, listening to loud pop rock music (I had no idea what that was) when Amaya and Ray stop by to ask him to turn it down. Turns out Nate was still studying the amulet. Bibbity, bobbity, boo, and Amaya figures out that both pieces make up one whole medallion and our amazing historian knows exactly what it is – the piece belonged to the centurion Longinus and the blood of Christ was also spilled on it. Oh, and unlike any changes in history done by the Legends when they time travel, changes by the Spear are permanent.

Now at the city of stars, Los Angeles, 1967, Malcolm Merlyn and Damian Darhk take a stroll through the Walk of Fame (Merlyn is a Sinatra fan, crucial information) on their way towards the spear. They murder some bikers because they needed a faster means of transportation and this ends up becoming an aberration big enough to alert the Legends that something is fishy, so they make the journey to LA.

In a situation that reminded me a lot of the “Grand Porne Fiasco of 2k15” (aka Game of Thrones season 5) when Larry and Bro-nn came to rescue Madison at the same time that the Sand Fakes came to kidnap her, it is now both the Legion of Doom and the Legends that come up to Rip Hunter at the same goddamn time. However, I will take Legends of Tomorrow’s side on this one (as usual) because it’s not contrived – it’s a correlation thing: the Legends arrived there BECAUSE the Legion accidentally alerted them and they didn’t even know Rip was there. So, yeah, Emmy-winning Game of Thrones loses this match against campy superhero show Legends of Tomorrow. 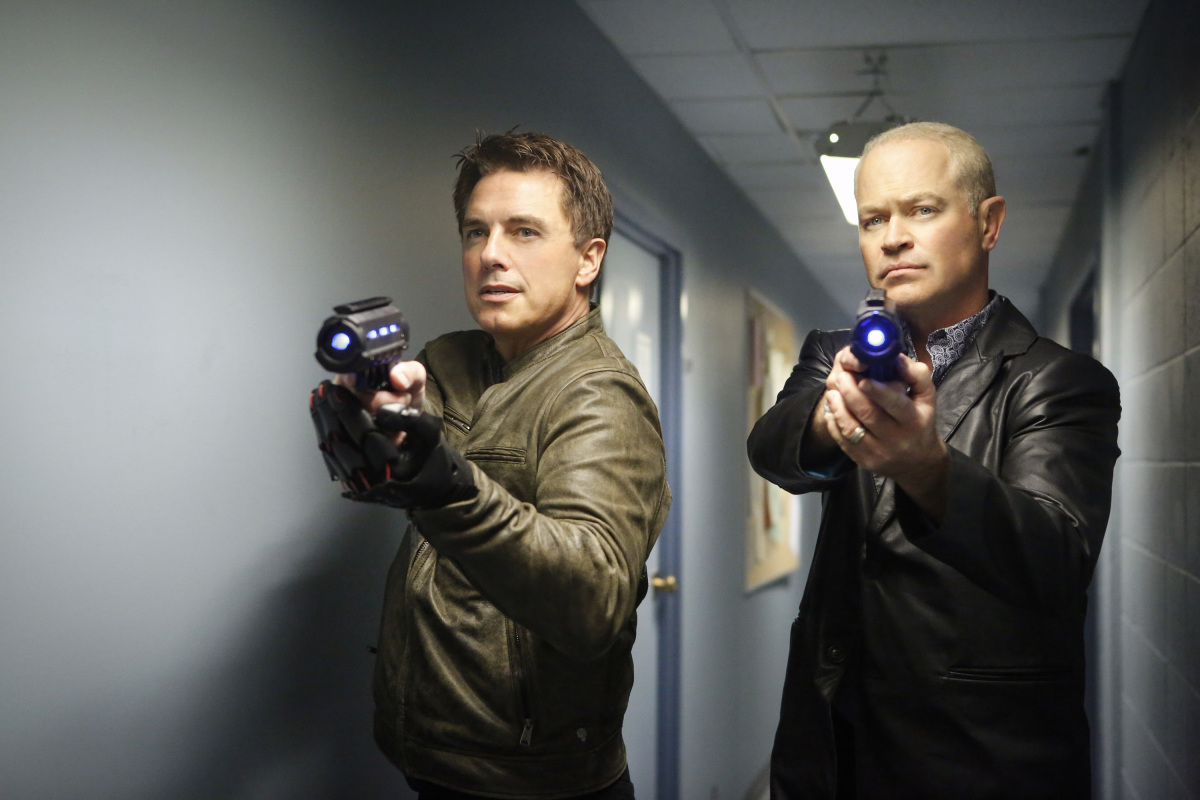 However, Rip doesn’t know who he is. He doesn’t know who Rip is. He’s just a guy at film school shooting a movie that is basically season one of Legends of Tomorrow (called Legends!) which also provides a bit of a self-drag as they acknowledge that Vandal Savage was not a good villain. Both teams battle a little, pow pow & bang bang, and cops show up leading to Rip’s arrest. Oh, and btw, Rip’s prop master is George Lucas.

The Legends end up correctly theorizing that Rip Hunter must have the spear if the Legion was also there. They brainstorm a rescue plan that involves Martin posing as Rip’s psychiatrist and getting him out of jail. They arrive at his cell just as Malcolm and Damian are entering the building. The Legends go to the roof and Ray channels his inner Han Solo to pilot the Waverider (this is a direct quote, not snark). There’s a brief fight scene with what appears to be those Stormtrooper’s weapons and bad aim leading up to a safe escape.

Gideon diagnoses Rip with some sort of physical change to his brain due to him having touched the Time Drive (the spherical thingy). Apparently, he’s simply not Rip Hunter anymore. I think he goes by Phil.

The fun, however, doesn’t stop there: Ray and Nate appear to be suffering from some major losses in their memory. The team quickly realizes that it is ALL GEORGE LUCAS’S FAULT! Turns out that after George’s escape from the first fight between the Legion and Legends, he dropped out of film school and never actually created Star Wars (Ray’s motivation to becoming a scientist) and Indiana Jones (Nate’s motivation to becoming a historian). 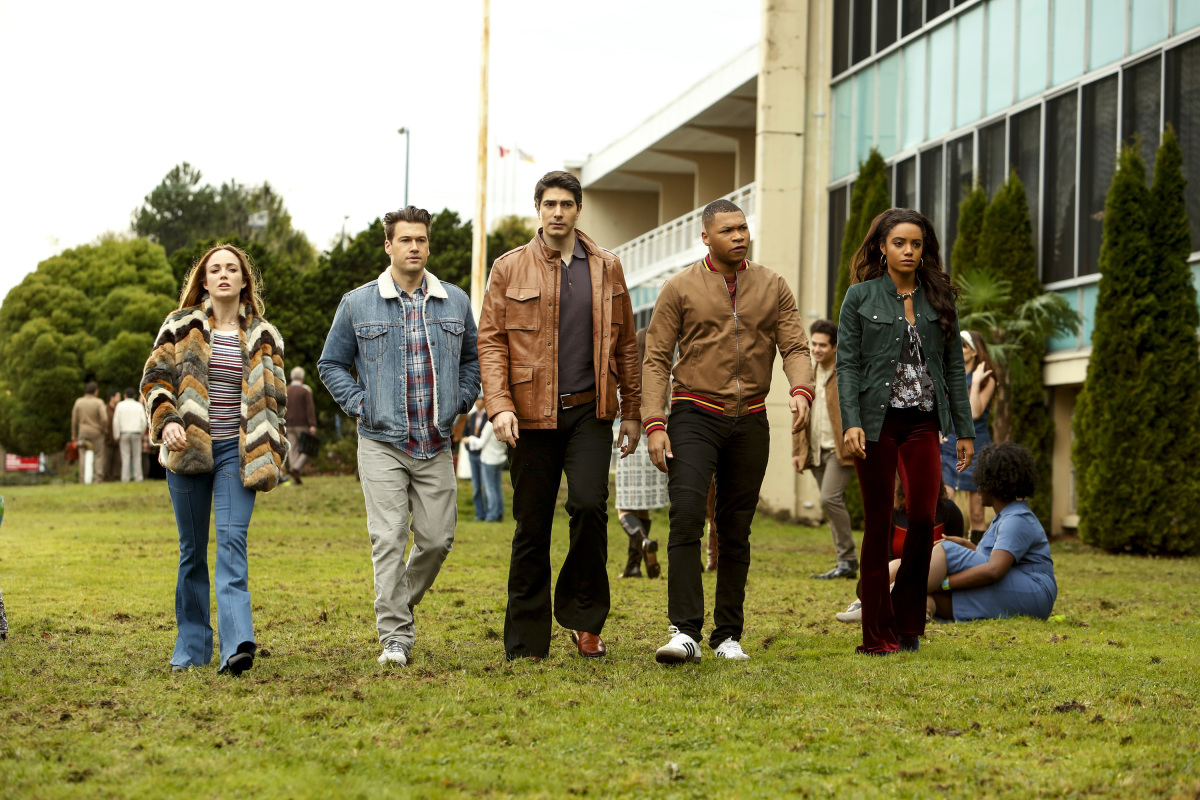 So the episode makes the shift from “let’s save the world” to “let’s save George Lucas so we can save the world”. Nate, Ray, and Amaya track him down with the latter giving Lucas the ultimate pep talk that ends with “you’re our only hope”. Yeah, that’s also a direct quote; the writing team really went all out. I’m not even close to done with Star Wars references.

For the third time now, the Legion ends up intercepting the group made up of Ray, Nate, Amaya, and George Lucas when they went to retrieve the spear. Merlyn ends up fighting Amaya and pulling her necklace from her neck, taking away her powers. This compounds with the fact that Ray doesn’t have his ATOM suit and Nate can’t steel up as a direct result of the lack of nerdy movies that star Harrison Ford (I wonder what happened to Harrison in this timeline without George Lucas).

The group makes a trip to the city dump, since George had trashed all his props when he gave up on film school. The Legion throws the Legends + GL in the dumpster, and prepare yourself for another homage, because Malcolm presses a button and the walls of the dumpster they’re in start closing off on them. HAHAHA. Yeah, it was a pretty cool visual.

Anyways. They end up finding the Spear, but are still hiding from the Legion. George gets another pep talk and believes in himself and the power of film-making, bringing back Nate’s and Ray’s powers/suit and stopping the dumpster walls. The Waverider comes in and blasts the Legion, saving the day. There’s some more hand-to-hand combat (Sara’s League of Assassins’ skills keep coming and going as the plot demands), Rip comes in dressed as his old self after another pep talk (this time from Gideon) and tries to help out, but semi-fails.

They try to escape, but there’s a whole thing with the Reverse Flash showing up and abducting Rip at the last second. Sara feels guilty and gets peppy speech #5 (maybe #6, I lost count) from Jax about how she can’t blame herself for Rip.

Oh, and totally detached from the plot was Mick’s thing with Snart’s ghost. Apparently he had a chip put in his brain by the Time Masters, which they assumed was the reason for the visions, but it turns out the chip was damaged and was therefore not the source of Mick’s delusions. So, yeah, it was just cognitive dissonance on Mick’s part, plus a need for the CW to keep Wentworth Miller around.

The episode ends with a lovely movie night organized by Amaya who, if you recall, is from the past and hadn’t watched George Lucas’s productions (hey, maybe I’m from the past too). Ray and Nate keep debating what to watch (Indiana or Star Wars) and there’s a little joke/drag on Howard the Duck that is pretty funny.

The end tag was Rip/Phil tied up on a chair begging not to be tortured by the Legion of Doom to no avail 🙁 .

Overall, “Raiders Of The Lost Ark” was a really great episode. Legends of Tomorrow knows what it’s about and, when it wants, it doesn’t take itself too seriously.