Scent Saturdays: Aramis "Havana" is the most miraculous budget fragrance on the market A popular perfume can find itself discontinued by a company for any number of reasons. Sometimes, a fragrance simply isn’t popular enough to rationalize its continued manufacture. Other times, a key ingredient becomes scarce or is even banned if it’s procured in a specious fashion. Every once in a while, the perfume is simply gone without much explanation at all.

Aramis, one of the first high-end male-marketed fragrance brands, launched “Havana” in 1994. Aramis is known for releasing bold powerhouse fragrances with strong doses of oakmoss and dark woods, and you’ve almost certainly smelled one on a middle-aged gentleman at least once in your life. By the time 1994 had rolled around, Aramis had spent thirty years solidifying its reputation as a fragrance brand of depth and sophistication. Even so, “Havana” marked a revolution. When it disappeared from U.S. markets over a decade later, it transformed from a great fragrance into a legend.

“Havana” is special mostly because it takes an old school formula and transcends it. At the base of the scent are familiar notes – oakmoss, vetiver, patchouli. This strong foundation is really the only familiar aspect of the perfume. The unexpected star of the fragrance, as suggested by its original cigar-shaped bottle, is tobacco.

“Tobacco?” you might ask, thinking about the million tobacco-based fragrances on the market. Yes, tobacco – but not your ordinary tobacco. The tobacco note in “Havana” is designed around the smell of the living tobacco plant. It’s bright, green, and fresh while still retaining the signature tobacco scent, meaning that Havana is ultimately a fragrance that gets to have it both ways. It’s fresh and bright, yet bold and deep at the same time. Notes of orange and cinnamon bolster this duality further. “Havana” is an extremely rare example of a fragrance that would have no trouble making its name known in a crowded bar, yet would also float on a spring breeze without offending any nose around.

The second miracle of “Havana” is that the discontinued fragrance once carried the high price tag of a rare find. However, Aramis relaunched the perfume in 2009, and since then, it’s been easy to find a new bottle priced under the $30 mark. It can even drop below the $20 mark if you know where to look. As reported by many wearers who’ve gotten their nose on the ‘vintage’ older editions and the new release, the scents are essentially identical. One of the greatest fragrances on the market will now cost you about the same amount of money as a generous fast-food order.

Hint: You can find it on Fragrancenet (click the image below) 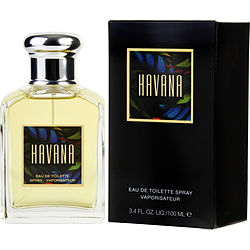 Fresh, spicy, and unique, Havana is a true classic in the world of fragrance. It performs remarkably well, holding a robust scent profile more than six hours into each wear and lasting as a delightful close-to-the-skin scent for close to twenty hours. There’s simply no area where Havana disappoints. The only way you’ll be left with the blues is if you miss this scent before it disappears once more, this time snagged up by buyers who realize that the fragrance is ridiculously underpriced in regard to its quality (see: Yatagan by Caron). Here’s to hoping that day never comes.