Well, that was…different. I suppose that I shouldn’t be surprised that a movie based on a comic book about Norse gods (kinda) would have terms like “Asgard” and “Odin” associated with it, but it was quite a jump from playboy shenanigans with Tony Stark last week.

I’ve always been a little disturbed by my own ability to like movies while my rational brain knows that they are kind of dumb. And while this is hardly True Lies, I can’t help but think I enjoyed this thing way more than it deserved.

The “Thor the Fish out of Water” stuff was genuinely funny, and I think I could watch him smash coffee cups and demand horses in pet shops all day long. Although, I have to ask how a town that we know has less than three thousand people in it could possibly support a pet shop with so many live animals.

I also really liked the visual effects in Asgard. I have always been a sucker for voice-over while slowly zooming into a sprawling city scape. Although I soured on it a little bit when it was revealed that Heimdall was some kind of Big Brother figure who can eavesdrop on people’s conversations, and everyone goes in fear of him. But Asgard is lovely. I’m also a sucker for the “Old gods as aliens” trope.

So why am I unwilling to call this a “good” movie, even if I’ll more than admit that it’s an enjoyable one that I liked? I think the problem is that it tries to do too much, and ends ups just not really doing anything so much as having stuff happen.

Let me explain. There are three relationships, or cluster of relationships, really, that affect Thor and his characterization: his familial drama with Odin and Loki, his bromances with his team of loyal Super Friends, and his romance with Jane Foster. Is it even possible for one movie to develop all of these relationships well enough to justify them?

The strongest cluster is certainly the Family Drama. I love me some family drama, so this pleased me greatly. I question Odin’s parenting style, which seems to be based on pitting his sons against each other at a young age, but his affection for both his children is clearly genuine, even if this whole thing was some kind of giant Batman Gambit. I think? And Thor, as stupid as he is in the beginning of this film, also loves his family very sincerely. Then there is Loki. I may not know much about MCU fandom, but I do know that Loki seems to be the Ur Personal Favourite White Boy. But, I can see it this time. As far as PFWBs go, he’s like the low-hanging fruit, at least in this movie. Like, the jerk has a point. His dad totally acted as though there was a possibility of him inheriting the throne while it was also quite clear that he always intended the job for Thor. To be fair, the secret he was keeping from his son was kind of huge. I totally sympathized with the angsty little guy when he wants to commit genocide and screw over his brother just to impress Daddy. And keeping Thor the Juice Head far away from the nuclear button is probably not dumb either. But I hope we can all agree that genocide is a bit of an overreaction. Even if they are Ice Giants. There are better ways to express your loyalty to your adopted family, dude.

But when Loki apparently died, I totally bought the idea that Thor would mourn him. A lot more then I bought his stanning for Odin, who’s totally responsible for this entire fiasco with his bad parenting.

Then there are the Super Friends: Bearded Glutton Who is Somehow not Fat, Token Asian With no Discernible Personality, Ms. Not Like Other Girls, and British Dandy. They are what they are, I suppose. I’ll eat my hat if there isn’t some kind of love-triangle-like drama brewing with Ms. Not Like Other Girls, but I digress. They all seem to actually like Thor, they stick their necks out for him, and he seems to like them too.

Thor’s Crowning Moment of Character Development seems to come when he’s willing to sacrifice himself to save his friends and Pet Shop Town. That’s when the hammer chooses him, right? When he lives up to the whole “living to serve his people” thing, in contrast to his thirst for blood and glory at the beginning when he invades Jotunheim. That’s an arc, I guess, but my main problem is that, like, when did this arc happen, exactly?

Because I think it was supposed to be his super wonderful deep bond with Jane Foster that suddenly turned him into a more-or-less entirely different character, and all I have to say to that is: no.

First off, this entire movie seems to have taken place over a single weekend or something, so when did they have time to form this bond that now bridges the distance between galaxies? And, while I’m extremely sympathetic to the fact that he’s Chris Helmsworth and she’s Natalie Portman and that explains a whole bunch, when did theses two fall in love? Was it when she was so distracted by his hotness that she was driving off the road? Or was it when they were on their one nerdy star gazing date? I’m quite sure those were the only two times they were alone together.

At some point between failing to pick up the hammer and the time the suit thing attacked, Thor became a different character. He stopped being a fish out of water and started being a dude who makes people breakfast and sacrifices himself for his friends. Okay. And the implication does seem to be that it was Jane that caused this. Certainly more than his bro-bonding with Cool Norwegian Professor Guy. Maybe I was supposed to think it was him thinking that his father was dead that was so important. But, really, that was kind of glossed over. 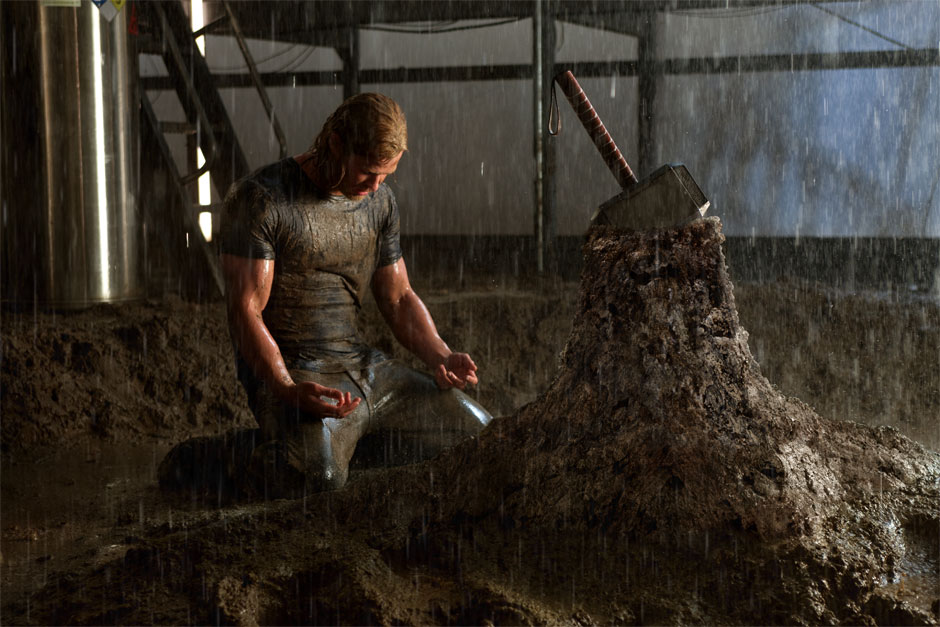 I don’t think the whirlwind romance would be that much of a problem if it wasn’t framed as so important to the thematic resolution of the plot. At least, I think it was. Loki thought it was. When Thor was making his huge character decision, it was the fact that he would never see Jane again that he brought up as the reason Thor shouldn’t do it. And his mourning her was mentioned in the same breath as his mourning for his brother.

And then there’s the fact that Jane is, well, kinda useless. She’s not exactly a bad character—she’s all smart and assertive, I guess—but what does she do? What impact does she have on the plot? The biggest “thing” she did was drive Thor to the crater and give him her ex’s clothes. With some very minor tweaks, Cool Norwegian Professor Guy could have done both of those things instead. As it is, his actions did a lot more for the plot than Jane’s, who, let’s be honest, may as well be called Lovey McInterest. So why was the focus not on their bromance? Why did this movie need a romantic component at all?

All that being said,this movie is my favourite in the franchise so far. I like a lot of the world building. Thor is a good hero, and Loki is an excellent villain. I can’t wait to see where their Daddy-Issues will take them.

This April, the halls of Asgard will “erupt with thunder” as its greatest legends return home to tell thrilling new tales in an oversized...

The God of Hammers is about to be unleashed! Next month, Donny Cates continues his action-packed Asgardian saga with a brand-new story, and artist...

JeremiahOctober 13, 2021
We use cookies on our website to give you the most relevant experience by remembering your preferences and repeat visits. By clicking “Accept”, you consent to the use of ALL the cookies.
Do not sell my personal information.
Cookie SettingsAccept
Manage consent