As The Flash takes on another villain of the week, Iris’s life hangs on the balance after a metahuman attack. In the meantime, Wally is tutored by Barry, and Caitlin bonds with Julian.

After Barry decided to get Wally faster so he can save Iris from Savitar in the future, we start off with one of these light-hearted training sessions. The Flash and Kid Flash go on a race that has both of our speedsters toe to toe until they reach a building which prompts them to react differently: Barry phases through it while Wally makes the climb and descend which only turns the game in Barry’s favor as he wins the competition. 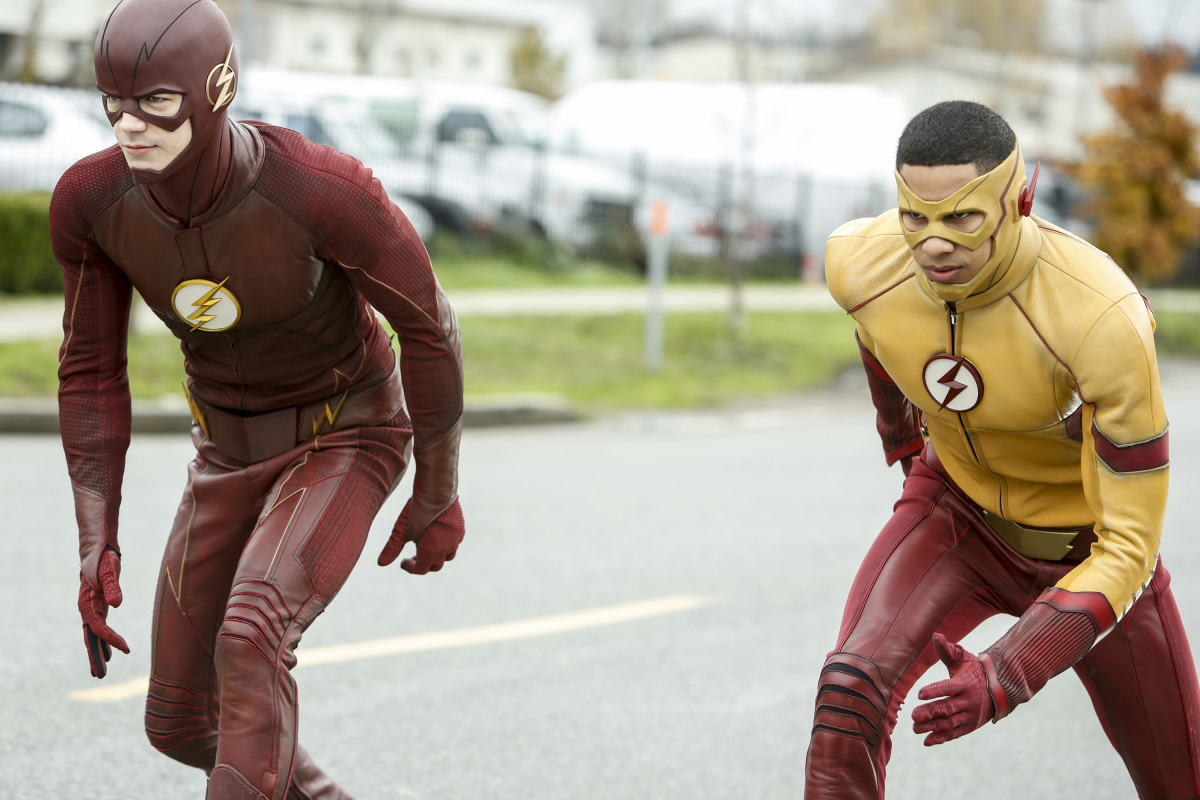 Team Flash decides that it’s time for Wally to learn how to phase through objects. As a body is found at a restaurant, Julian, Barry, and Joe make the trip to the crime scene to find an almost mummified corpse from a person that was alive only eight hours prior. Barry tells Julian to take the body to STAR Labs because of its better equipment. Meanwhile, Iris realizes that this particular murder is referenced in the headlines of the future’s newscast report, which only makes her more afraid they won’t be able to change her destiny.

Julian is being his usual dick-self while he and Caitlin are preparing to perform the autopsy on the body. As Caitlin opens the body bag, the body disintegrates into ash, proving it wasn’t caused by acid or any other substance, but by metahuman activity. In the meantime, we see the perpetrator in action, asking to shake the hand of a random singer and transmitting the “disease” to him.

Wally finds himself having a lot of problems phasing. When the body of the singer is found, the team rushes to get it to STAR Labs so they can investigate it before it decays. Caitlin realizes the hand has a darker shade and, upon examining tissue from it, they can separate two different sets of DNA strands. They identify the criminal as Clive Yorkin.

As Barry sees the picture of the singer before he died, he realizes that this man was the police captain during his time in Flashpoint. Thinking it might be related, he checks out the first victim’s pic and remember this one was a cop. Therefore, this new perp is targeting policemen from the alternated timeline for reasons unknown. Julian ends up making the connection that this was one of the people he gave powers to while he was Dr. Alchemy.

Joe, Iris, Barry, and Wally are at Jitters having a coffee with Joe’s girlfriend Cecille and her daughter, a big Kid Flash fan. Barry gets the message with the identification of the metahuman just as he arrives at the coffee shop targeting Joe. He proves to be impervious to bullets—anything that he touches turn to ash—but not to wind, as Kid Flash comes on and tornado-arms/vapes him away, allowing an escape.

The team gathers at STAR Labs and after witnessing her dad in danger, Iris breaks down and tells Joe about Barry’s visit to the future. Understandably, he starts screaming at everyone for their lies and storms out of the building.

Now Iris is at her apartment writing about the incident at the restaurant, when Clive tears the wall down. Our journalist is able to contact STAR Labs about being attacked. Wally takes it upon himself to take care of it, since he is closer than Barry. However, as he arrives at Iris’s, he unable to stop Clive from touching her arm and contaminating her with the decay factor.

Wally takes Iris to STAR Labs as she is screaming in pain while the disease is starting to spread through her arm. Julian says that a cold temperature might just slow it down enough for them to come up with something. All eyes turn to a reluctant Caitlin, who is initially afraid of not being able to do it besides letting Killer Frost take over, but decides to help after some pep talks and “I believe in you”s. 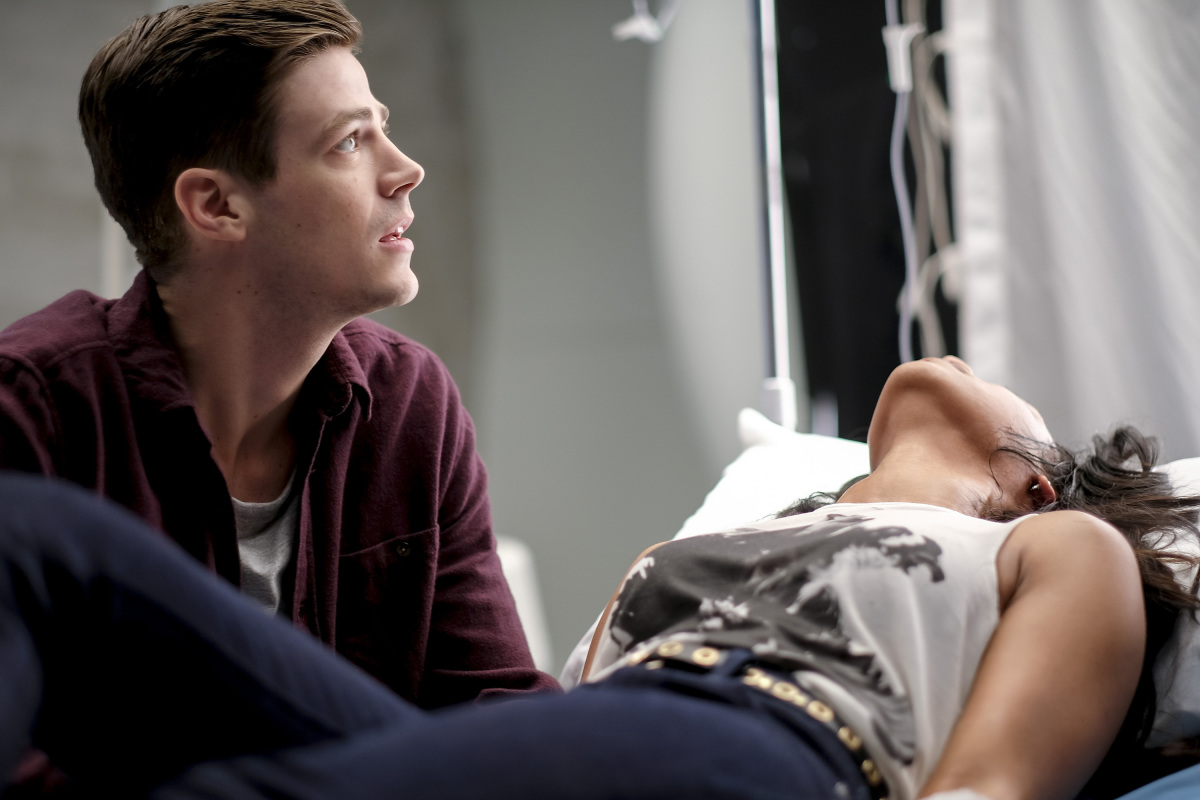 Cisco and HR come up with the idea of vibing Barry to Flashpoint to see if there’s another possible police officer Clive might target, so they can avoid it and possibly catch the meta. As their impossible idea proves to be possible, they see that Clive was saving best for last: a certain policewoman that was pretty much bragging about catching him for everyone in the precinct to hear.

Joe meets this woman, Stone, at a train station to warn her about Clive, but she is somehow dismissive of it all. Caitlin starts to lose control to Killer Frost, but Julian, who was being a total dick to her earlier on the episode, makes a grand speech about fear and belief, getting Caitlin to be herself again and keep helping Iris.

Clive, who saw Joe and Stone embarking the train, takes down a column from a suspended highway piling the track with a lot of rubble. The Flash and Kid Flash arrive at the scene, but realize they won’t be able to take everyone from the train on time. Barry has the idea of phasing the entire train through the highway rubble, which sounds completely impossible, but he does it anyway.

After Julian told Barry that his blood’s ability to regenerate itself high speed might be the “cure” to Clive, Barry asks Wally to cut his hand and phase through Clive so that the blood could go inside the villain. Wally is unsure at first, but the power of “Run, Wally, run”, an almost running gag/motivator/source of cringe at this point of the show, compelled him to do it successfully, terminating Clive’s threats.

Iris wakes up at STAR Labs to the news that Clive’s blood was the source of an antidote which made her heal and everything is alright again. Joe is motivated to help the ultimate goal of avoiding Iris’s death, even if this episode never touched again on how they would stop the murder restaurant from closing.

In the end tag, we see Wally being able to phase his hand through a wall, a task much more internal than external, when a breach opens letting Jesse Quick in. She warns Wally that Grodd has kidnapped her father and taken him to Gorilla City, but that’s a story for the upcoming two-parter that starts in two weeks!