And no, I will not apologize for referring to the team made up of Cupid, China White, and Liza Warner as Sirens: not only it is easier, but also relatively correct to assume that this was indeed Arrow’s take on the team originally composed of Harley Quinn, Poison Ivy, and Catwoman (even the episode’s name, “The Sin Eater” reminds me of the Batman villain group). Nonetheless, this time, not only is the Green Arrow facing the trio, but also the ACU for his accidental killing of Detective Malone.

Thus, we start off with Oliver meeting up with the mother of Prometheus – or so they want us to believe although I still am of the opinion that the villain will be revealed as someone more relevant to the story than the son of some criminal Oliver killed in season one. Anywho, Oliver explains the situation to her and asks for her son’s name, but she won’t give it to him because she believes her son/Prometheus quest against the Green Arrow is justified for killing her husband. 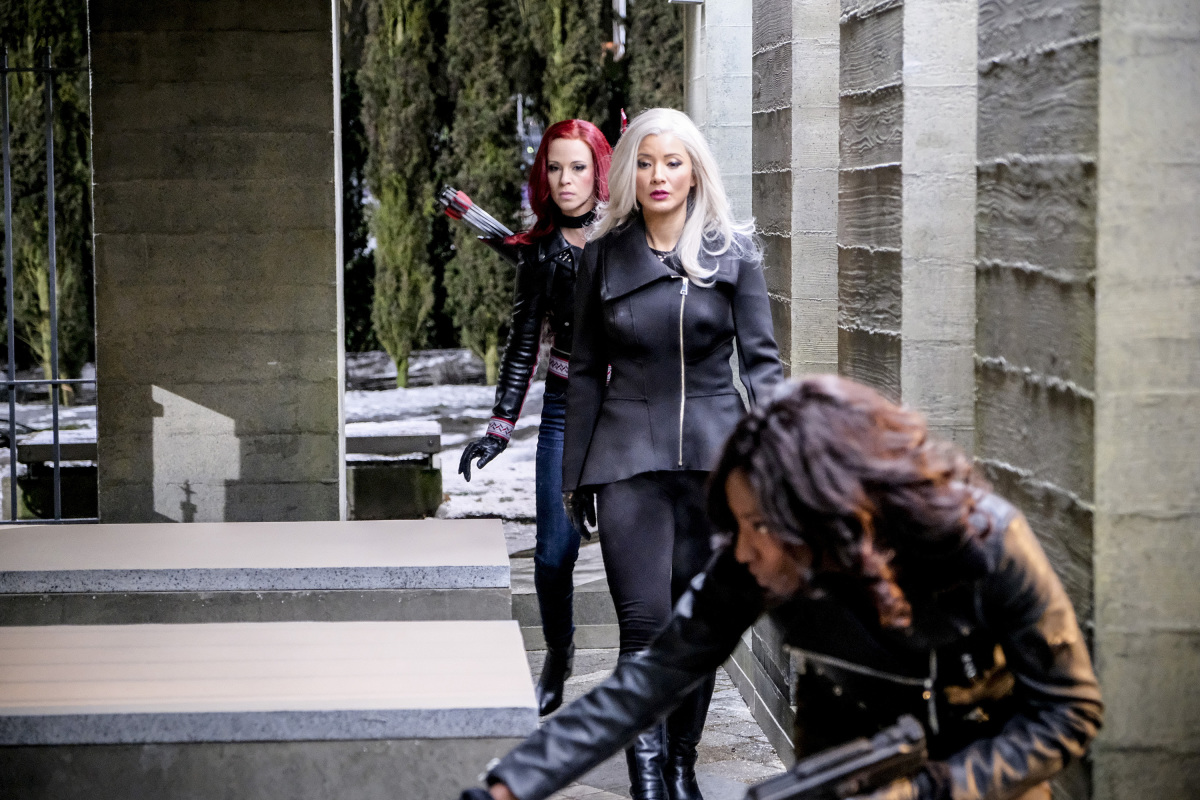 We see Cupid, China White, and Liza Warner (I’m sad that she doesn’t have a cool nickname) using cheap and contrived plots to escape from an ARGUS bus and killing two guards in the process.

After getting those pictures and further evidence that Oliver could be the Green Arrow, the reporter and Oliver’s current girlfriend decides to just bluntly ask him if he is the hooded vigilante. He says he isn’t, but she clearly doesn’t believe him. He confides in Thea about Susan’s question and she gets seriously spooked.

The Sirens attack China White’s old turf, the Triad, leaving several other people dead. Team Arrow gets there too late, but through a security cam footage, Oliver finds out that they are after a “depository”. Quentin is dealing with the personal guilty of being involved in Liza’s arrest because of her escape. 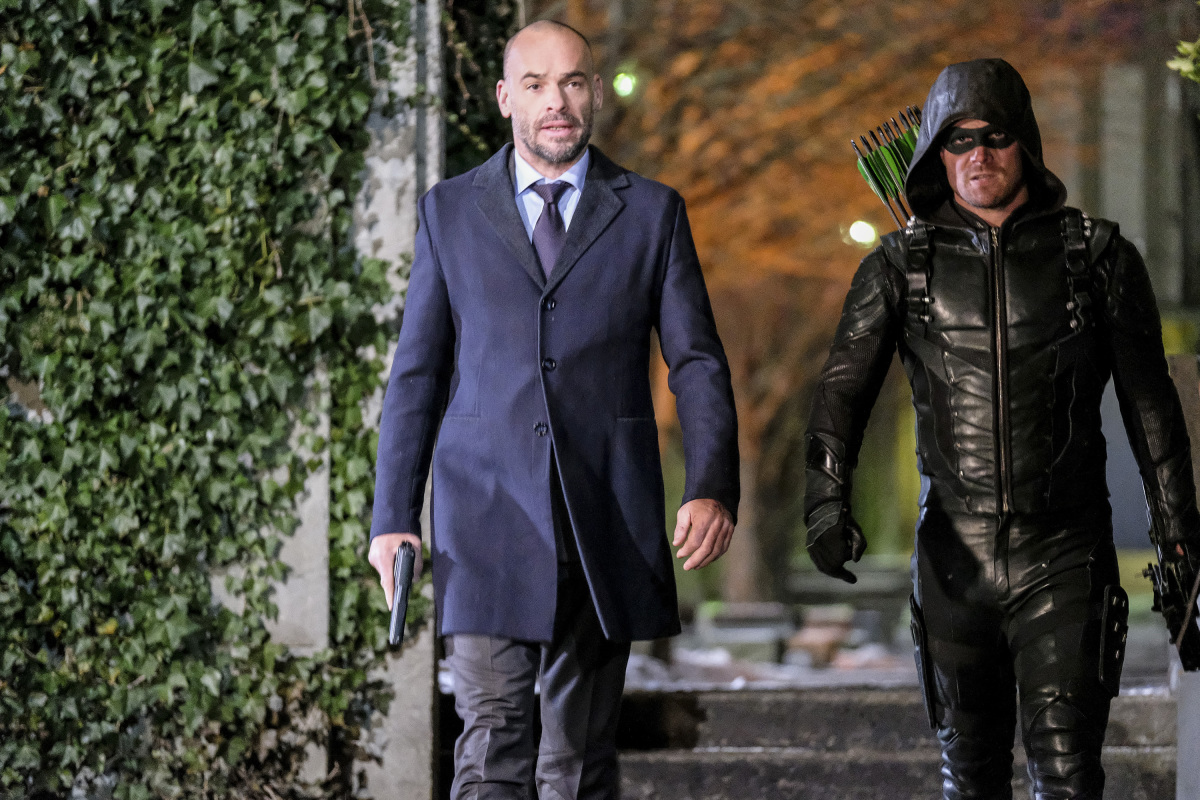 Thea asks Felicity to hack into Susan’s convenient and easily hackable computer in order to obtain information. They find out about the pictures she has on Oliver being Bratva and how they connect to the Hood’s action five years prior and decide to act upon it to protect him.

Mr. Terrific, who got a makeover (nice!), and Wild Dog intimidate a Triad member to find out what the depository is. They discover that it is one of the remaining stacks of cash Tobias Church had left after his death early on the season.

The Green Arrow and Quentin arrive at a place where the Sirens are attacking. There’s a Bertinelli name drop and the audience collectively images what would be like if the Huntress were part of the Sirens instead of, let’s say, Cupid. Quentin pursues Liza himself as she calls him out on his hypocrisy on working for Damian Darhk last season which was, according to her, the reason why she decided to escape and leave her rehabilitation process. 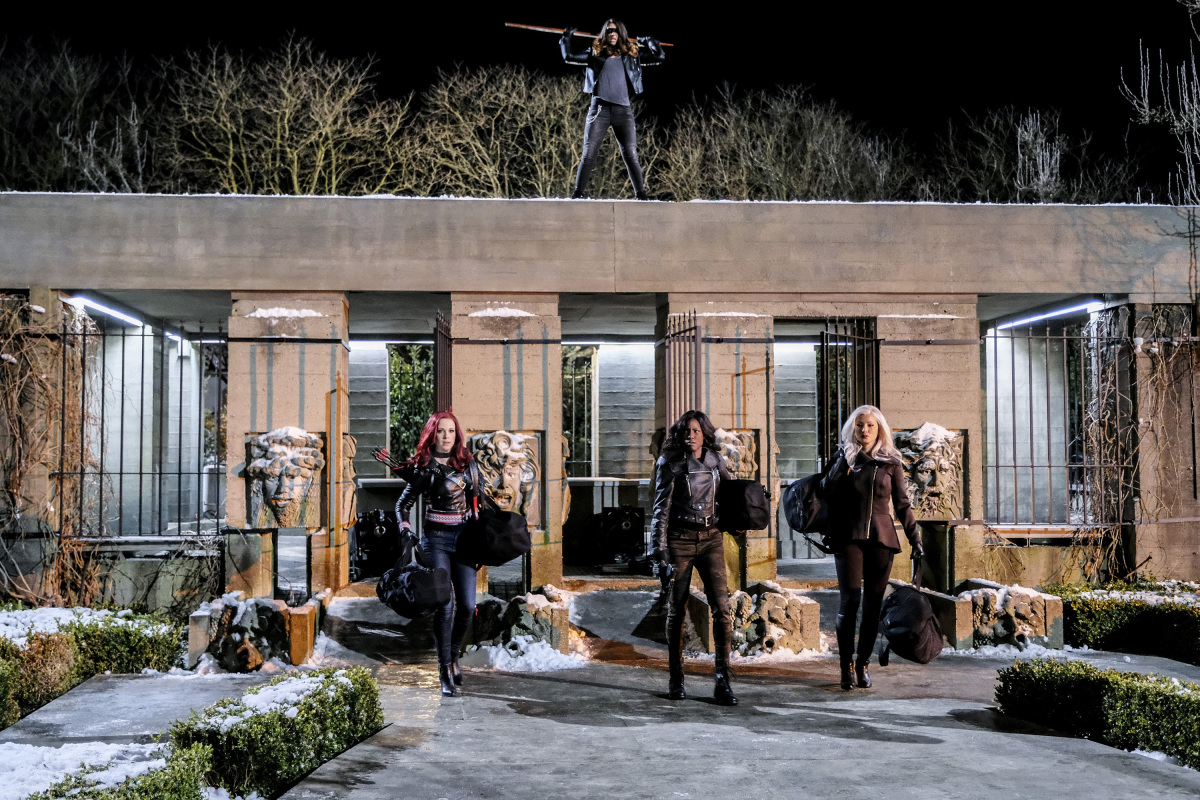 As Oliver is successfully battling both Cupid and China White, he is surprised by the Anti Crime Unit (ACU) surrounding him and calling for his surrender for killing Detective Malone. He is taken aback, but he manages to escape with a fire stunt attached to his bow that is quite a bit unrealistic.

We cut to Captain Pike from the SCPD as he explains to Oliver, Adrian Chase, and Quentin that he received an anonymous letter with an autopsy report on Malone’s body that indicated arrow-like wounds which differs from the official one released. Pike says that this is enough for the ACU to declare the Green Arrow a public enemy and go after him. Oliver realizes that Prometheus had sent letter with a stamp from his “mother’s” city as to warn him that he knows of his plan.

Oliver then is met with a depressed Susan Williams who claims she got fired after a bunch of plagiarizing evidence was found in her computer. She implicates Oliver in this as of the convenient timing of this occurring just after she questioned him about the Green Arrow – specially given she actually *knows* that he is the hero. He asks Felicity about it and she confesses on hacking that information into Susan’s computer as requested by Thea, which leads to a heated argument between siblings on how Thea just ended Susan’s career life forever by trying to protect him as her credibility as a journalist will forever be stained.

Now it is up to Quentin to inspire Oliver to put on his hood again as he is decided to let the police deal with the Sirens. It is worth mentioning that in one of the flashbacks (which I will get to later) Anatoly calls Oliver a sin-eater. The term refers to a story about a man who ate a bunch of fruits and vegetables off people’s corpses as to “eat their sins/take on their sins”. So, during the episode, this is a recurring theme: Thea implies that Quentin is having too much guilt over Liza, and now Quentin himself tells Ollie that he is sin-eating for the Green Arrow’s killing of Det. Malone.

Feeling inspired, Ollie goes to Captain Pike and basically uses the “I have a friend who…” discourse as he explains that the Green Arrow told him what had happened: Prometheus employed a ruse so that he killed Malone. The Captain is not too convinced on his tale, but Oliver still decides to go after the Sirens even with the risk of being caught. 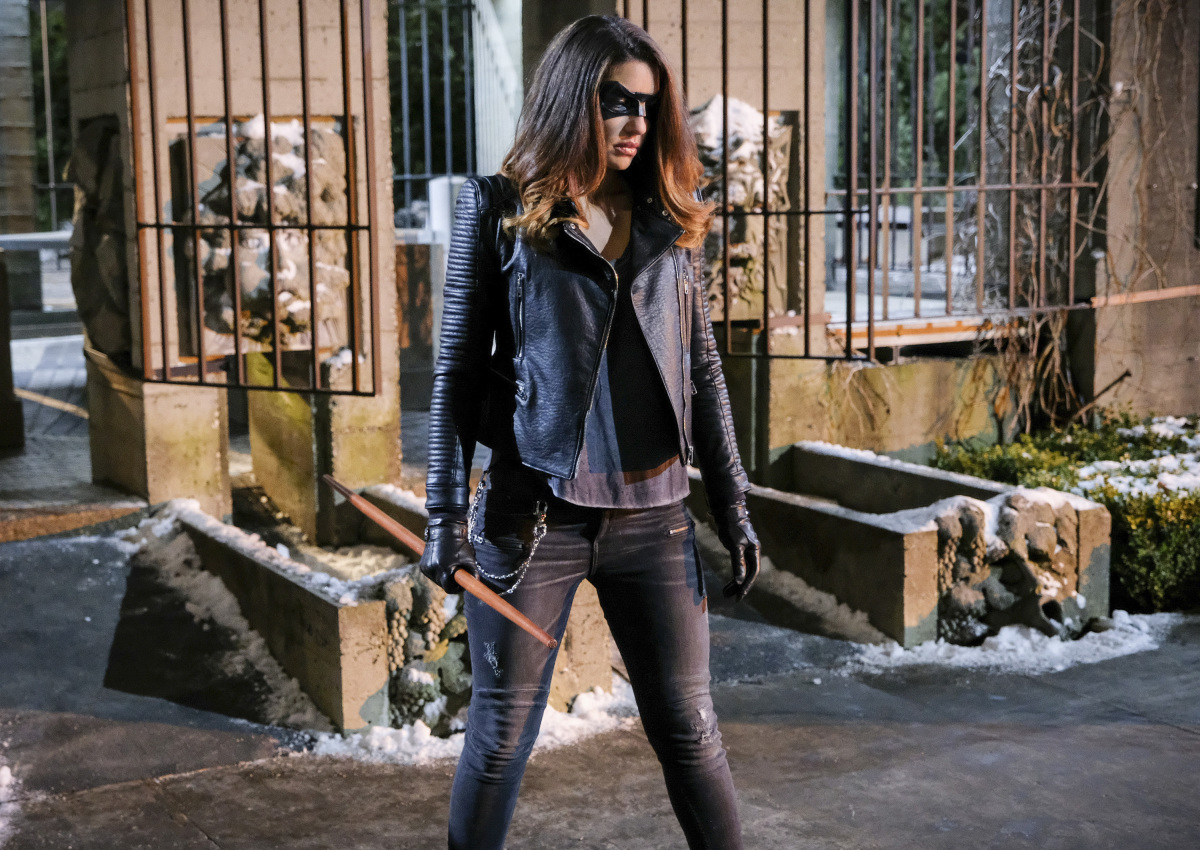 I love her already.

Felicity gifts Dinah with a Black Canary mask as she was sworn in to the SCPD and can’t go around at night vigilanting without a superhero costume anymore. She even is feeling uncertain about effectively taking on the Black Canary mantle and voices her concerns to Quentin who says Laurel would be proud if someone good took over.

The Sirens kidnap this one dude who says he knows where the depository is and he leads them to a cemetery where they find the money. As they are trying to leave, the group finds Team Arrow waiting for a battle. They fight hard (I particularly love when Dinah uses her screaming to send someone flying, it’s super hilarious) and the ACU arrives, but only arrests our female villains, leaving the Green Arrow untouched.

Oliver has one final moment with Thea as the siblings reconcile after her choice to incriminate Susan Williams and he even tells her that she acted exactly like their deceased mother would. The episode concludes with Adrian Chase telling Oliver that the press has learned that the Mayor had taken part in the cover up of Detective Malone’s murder by the Green Arrow.

Over the Flashbacks, nothing much happened. Besides the Sin-Eater story, Anatoly was still at the hospital when Oliver realizes there are people trying to kill the Bratva captain. He spends quite some time helping out his friend escape from Gregor who had, in the end, a gun pointed at Anatoly’s head.

As a final thought, I’d just like to, again, express my contentment over this episode semi-centering over the Sirens which included two women of color in its roster without ever being contested as weak or incompetent. Also, “The Sin Eater” was written by Barbara Bloom and Jenny Lynn, in addition to being directed by Mary Lambert which is great to see with the news I read today that out of all 41 of the broadcast Fall TV pilots for this season, only one will be directed by a woman.

In this article:arrow, DCTV, Green Arrow, the sin eater