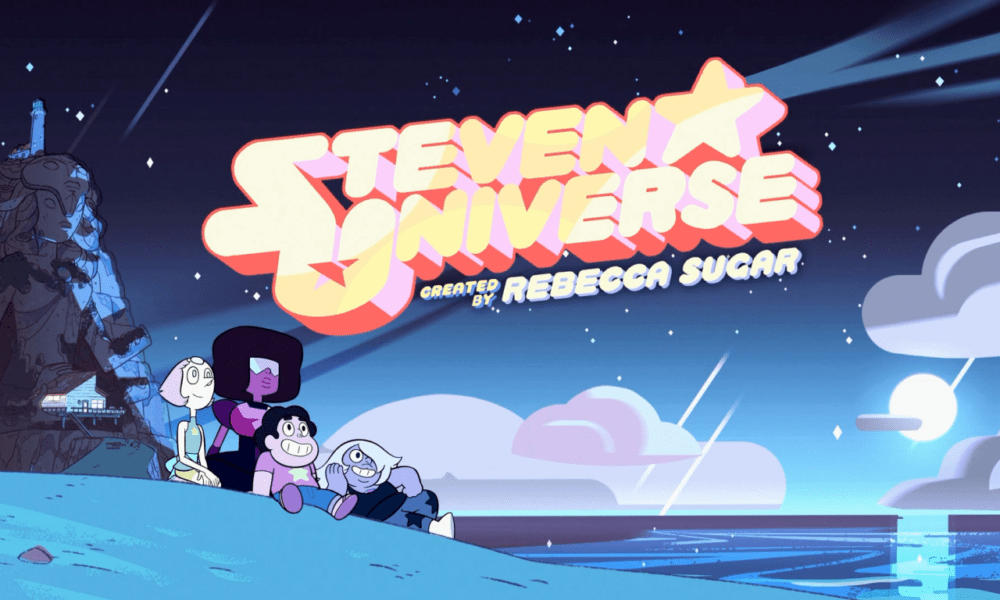 Dissecting one episode: “Sworn to the Sword”

I have only positive things to say about Steven Universe. Yes, it is a “kid’s show,” by every single metric. Yes, the drawings are simplistic and the colors are bright. But its narrative, time and time again, demonstrates that it is one of the smartest and most mature shows on television right now. It’s stupid how good it is. It makes me want to have kids just so I can show it to them.

I’m not simply talking about how creator Rebecca Sugar is able to inject intersectional feminist messaging into the very fiber of her show, or how there are specific arcs that revolve around teaching kids concepts of “consent,” “prejudice,” and the importance of self-love without derailing the “main” plotline. I’m talking about the fact that in each of its short, eleven-minute episodes, the writers and animators are able to establish context, drama, and thematic significance that put most feature-length films to shame.

Let’s break down just one episode from the second season: “Sworn to the Sword.”

For those who don’t watch Steven Universe, I will quickly explain that the main character, Steven, is a half-human, half-magical alien creature thing known as a “Gem.”

Gems all have well…gems (rock) somewhere on their body that allow them to summon a weapon. Aside from Steven, most of the Gems are thousands of years old. And they like…fight and stuff.

Steven’s summon-able “weapon” is a pretty pink shield (and he can like, heal with his spit and stuff), because Rebecca Sugar blends tired tropes into smoothies and then drinks them for breakfast.

Steven lives with 3 of these Gems, one of whom is this lady here, Pearl:

Pearl is incredibly type-A, and as we learn, has very little self-worth. Back on her Homeworld (Steven and the 3 Gems live on Earth…Delaware to be exact), there’s this Gem-caste system, and as a “pearl,” she was designed to be subservient. Kinda like a butler, though our Pearl learned how to swordfight. She ended up devoting her entire life to Steven’s mom, Rose, who died so that Steven could exist.

She’s great. She’s Steven’s human friend, and she’s a fantastic nerd who gets up in arms about shitty adaptations of books (who would do that??). She and Steven have adorbs little kid crushes on one another. Oh and a couple of times Connie’s gotten into weird magical battles with Steven, and thanks to her tennis skills, was able to wield a sword with a degree of success.

The episode “Sworn to the Sword” has complete character arcs for all three of them. But what’s more is that it is able to set up the tension and drama in very effective, and incredibly clever ways.

The episode opens with Steven and Connie singing a song that is quite intentionally childish. It’s called “Jam Buds,” and it’s just a cute little ditty about how they’re good friends, told through the allegory of strawberry jam on a biscuit. Steven ends the song by whipping out some literal jam to eat. When seagulls come to attack, Connie wards them off with her violin bow, reminding Steven of her sword-fighting abilities.

He then comes up with the idea to ask Pearl to train her. Pearl at first wants to say “no” because these kids are like…11. But when Connie frames it as “I want to protect Steven,” Pearl is touched and agrees. It’s clear it reminds her of her own commitment to Rose.

But here’s where the ingenious stuff comes in: the show establishes tone remarkably well. When they first warp to the arena, Connie reacts to this form of travel with childish bliss. When Pearl explains to Connie that as “Steven’s knight” she has to bow to him, she does so, with both of them giggling throughout it. The scene is light-hearted, it’s childish…it’s cute.

When Connie meets her training “opponents” (they’re holograms of Pearl), Steven instinctively puts one of his shields around her, showing out of the gate that he doesn’t love the implications of her being “his knight.” But he’s not about protective paternalism, yo, so he goes and sits on the side, looking noticeably embarrassed.

Then the song starts (*praise hands emoji* for all of Rebecca Sugar’s musical numbers) with Pearl singing the message “you do it for him, that’s how you know you can win.” However, she also often stumbles and says “you do it for her, that is to say, you’ll do it for him,” showing that her mind, her focus, is firmly on her dedication to Rose and projecting that onto Connie.

The song sort of progresses as a typical training montage. We see Connie look happy at the beginning, then start to get a bit more serious, while also becoming more confident in her skill. However, this song adds a building sense of doom. We see Pearl’s expressions become increasingly intense, we are shown Connie’s growing resolve, and we also see Steven begin to worry. The moment of the tonal shift, where it is made clear to the audience what is happening, is when Pearl sings the lyric, “what they don’t know is your real advantage, when you live for someone you’re prepared to die.”

The seriousness is imparted both through the strength of these words, and Steven’s horrified expression. And though it’s clear that Connie has gotten quite good and is now a force to be reckoned with, we, like Steven, finish the musical number with supreme unease and discomfort.

Now, another thing about Steven Universe…it’s funny. The next scene is Steven reading a book that is literally titled “how to talk to people,” with two steps: 1.) Think of what you want to say to people, and 2.) say it. This cuts the tension for an audience breather, while also continuing the plot. Integrating humor into a dramatic plot organically is something many shows struggle with, yet Steven Universe makes it seem quite simple.

The other two Gems that Steven lives with notice something’s wrong. He tells them he’s worried the sword-training is too serious and dangerous, and the other Gems confirm that yes, Pearl used to throw herself foolishly into battles and get destroyed over and over for the sake of Rose (Gems can regenerate when they’re hurt). That’s when we get a sense of urgency, as we see Steven’s panicked expression when he runs to stop the training session.

He gets to the training field and it’s…scary.

There’s like, mist everywhere so it’s hard to see, and these spooky holo-Pearls keep popping out. Steven bumps into Connie (who stabs one of the holo-Pearls for him), and tries to tell her he’d feel better with her stopping. But Connie insists that she sees everything clearly now: that she “is nothing” and has to protect Steven. That’s when he uses his shield to stop another holo-Pearl, declaring “if you’re the one protecting me…then who’s the one protecting you.”

He gets her to agree to fight together with him. Pearl realizes this and tries to tell Steven it can’t happen, but they won’t hear it; they’re jam buds.

There’s a bit of a heated sword fight with Steven and Connie acting as one unit (sword and shield) against Pearl. When Steven continually refuses to stop fighting alongside Connie, Pearl hits a breaking point, and screams out “just let me do this for you, Rose!”

And like that, all the tension fades. Pearl looks embarrassed, and with tears in her eyes drops her sword and goes to sit down.

The kids join her, where Steven says that the “you’re nothing” talk was “freaking him out.” Connie asks Pearl if Rose made her feel insignificant, but she says “Rose made me feel like…like I was everything.” Then she shakes it off, comments on how much they clearly care about each other, and how they’ll both make great knights.

If it wasn’t clear, these are three FULL character arcs. Pearl projects her own past and role onto this training, and when it is challenged, she has a near breakdown. This not only forces her to address her self-conception, but it smartly sets up a plotline for a few episodes later, where Pearl’s lack of self-worth and insistence on living *for* someone else lands her in trouble.

Connie fully committed herself to the idea of fighting to protect Steven (and did get really, really good at it in just one episode), but was also was taught a lesson in self-care. The episode started with her protecting Steven from seagulls, and ended with Steven protecting her from holo-Pearl. Their synchronization and insistence on being “jam buds” on the battlefield is adorable, and solidified Connie’s place on the “team,” if you will.

And then there was Steven, who came to recognize, understand, and explain his anxiety surrounding this training. He too, solidified his role, as the person who will always be there to protect his friends and not let anyone go at it alone.

Then there were the ingenious tonal shifts throughout the episode, mostly accomplished through reaction shots of Connie and Steven as Pearl would explain her stance:

Even though this is a kid’s program, those who work on Steven Universe are uniquely talented in their mastery of the “show, don’t tell” rule. We see Pearl’s intensity, and how it all drains away the moment she screams her startling admission. Even simple things like Connie’s outfit change are there to demonstrate the increasing seriousness of the situation she’s in. What’s marked is that these kinds of subtleties are things that major, critically acclaimed television shows can’t master. I felt more of a sense of building dread in this episode than I did during all of “Hardhome.”

Then, when you take into consideration the thematic significance of it all? The positive messaging for kids? The way it fits into the larger picture of the ongoing narrative? NOT TO MENTION, THIS WAS ACCOMPLISHED IN 11 MINUTES!

There’s only one word for that: brilliant. Steven Universe is a masterpiece, and regardless of your age or life-situation, it is a show well worth watching. THIS is what should be winning Emmys for “best writing.”

In this article:children's media, rebecca sugar, Steven Universe, sworn to the sword
Up Next: The Steven Universe Movie Gets a Bonkers Trailer “Change Your Mind” A Beautiful Resolution with Flaws