Since about 2013, I’ve been in and out of bookstores, picking up on new serials as they occur and quickly losing interest. But one has captured me for quite a while – the galactic epic dubbed Saga, co-created by Brian K. Vaughan and Fiona Staples. If neither of these names nor this series sound familiar, I will happily tell you about them very soon. As I walked in and out of comic book aisles, the cover (top image) already grabbed my interest from jump: an interracial (and inter-species) couple, with the woman breastfeeding a baby in one hand, a gun in another, and her partner wielding multiple weapons. If that does not sound at least a little interesting, turn back now because I’m about to gush.

I LOVE THIS SERIES.

I rarely have time to review literature (a full time job and side jobs can do that to you, but stay tuned as there is definitely more to come) but this is a fantastic, quick read, and is in that sweet spot of age- about 3 years – that it’s accessible too. Most book stores and even libraries that I’ve encountered have at least the first volume available, which is fantastic for first time readers and for those who do not want to spend a lot of money on a new series. But of course, I will try to convince you further.

Let’s start with the creators, especially the illustrator. Fiona Staples is killing the comic book game with her fantastic artistry, and does

not let the readers down here. The Canadian artist is cited as one of the better illustrators in the industry today (yay women in nerd culture!). She is the winner of multiple awards, and has worked on DC’s DV8: Gods and Monsters. Her own images in Saga are fabulously profane, and while it’s okay to not be a fan, you have to admit that it’s damn good. Brian K. Vaughan is the other half of this team, who works closely with Staples to co-create Saga. He has worked in television as well as comics, on projects such as the adaptation of Under the Dome and as a writer for Lost. Don’t knock me, but I loved parts of Lost, so I’m even more on board with my love for this comic after learning this myself. Fun fact about Saga: Vaughan apparently has been developing this universe since childhood, so extensively so that there is even another language (called “Moony” by most) that is featured frequently. Yay, world building!

To provide a small summary, the galaxy is entrenched in a war that moves from planet to planet  after the main opposing forces destroy their own, and quickly engulfs the entire surrounding galaxy and forces  aliens and humanoids alike to pick a side. And in the midst of it, we have Hazel, the unreliable but vital narrator who (spoilers) is born in the first few pages of the series and, as far as the reader knows, lives long enough to recount both her and her parents’ stories. I don’t want to reveal much more, but even though Hazel herself considers her existence as unimportant, the rest of the galaxy would beg to differ, and the dangers that follow her are vast and determined as they tail her parents, Alana and Marko. Basically, it’s a hardcore parenting guide in a brilliant disguise. Plus some good meta.

From what I’ve read of reviews, people have been long comparing Saga to the Star Wars films because of its space-opera themes, but I feel that the two should not be compared. According to Vaughan, unless someone is willing to, there won’t be a way to do so on the same level regardless-he does not want this series to be filmed. Which to be honest, gives me some relief, as the only network to really be able to do so would be HBO, and we know how that’s going so far. To me, the only similarities are that both stories take place in space and there are multiple, colorful species. If anything, Saga’s feel reminds me more of a fresher Cowboy Bebop (a great anime, if you have not heard of it) than Star Wars.

As of right now, I’ve swept through volumes I and II, and I’m loving every page. This isn’t so much of a review as a plea to check out Saga, as I’d love to bring any comic readers into this fandom. It is one of the most badass love stories that I’ve read, starting out as Romeo and Juliet (In Space) a la Baz Luhrmann’s design, and quickly becoming its own. Humanoid and non-human alike, the beings inhabiting those planets are relatable and deplorable at their very core, which drags you in almost instantly. 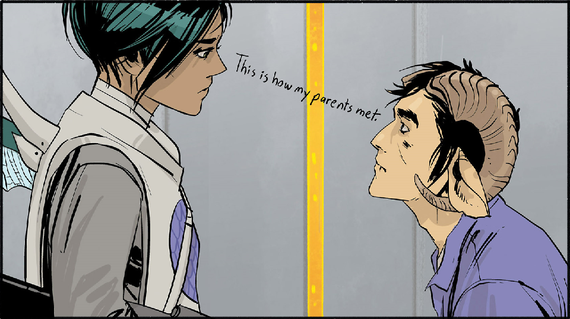 So adorable…until the next panel

Speaking of characterization, I have to comment on the inclusivity here. Even though they are not all human, most of the main players are clearly inter-cultural and come in all shades. I actually caught second wind of Saga because I was told about Gwendolyn, small, dark skinned woman with a vendetta against our main characters. But my point is that the representation is there without us even having to ask. Men, women, children and cats alike are pretty well rounded in this series. While the men are capable of mass violence, they are also sensitive to the world around them and are mostly depicted as such. The only times women are in distress are while they fight for their lives. They are fantastically multi-faceted, becoming fighters, mothers, politicians, and feared bounty hunters. This series strives to make the characters relatable, not just results of a war-torn universe. I will say that some characters are taken away from us too soon, but thankfully their deaths are not just catalysts for another character’s development.

Most of all, it’s very down-to-earth for a series that has so many strange things going on. In just two graphic novels I’ve encountered many hard-hitting topics, such as interracial relationships and their ramifications, sex trafficking, the price of war, environmentalism, and much more. Saga gives a lot of layers in just under 200 pages per volume. As I tear through further episodes of Saga, I’m sure to love it more with each passing page.  If you have the time, I suggest you check it out as well. It’s NSFW, however – unless you work somewhere cool, like me. Plus, it may keep your mind off of the current travesties of our pop culture at the moment- or highlight the glaring problems. Either way, I think it’ll be productive and entertaining. Happy reading!

Oh, and fun fact: Apparently Saga was featured on Big Bang Theory for 2 seconds…because of the breastfeeding cover. Ah, that show never fails to not impress me. Hello there, dear readers. You may wonder why there hasn’t been a Saga review in a while. The reason is a turn of events... It’s a fine line that which divides nature and a zone of comfort; so fine it’s sometimes too easy to confuse one with the... Well, I gotta come clean here. It’s been a little more than a week since this issue’s been out. I’ll claim my little finger’s... The Number 50 Marks a New Journey in Saga

In my experience as a comic book reader, I’ve known plenty of titles that keep a particular tally on longevity. For widely-known, well established...