Ruins of the Empire Rises Up I went into Ruins of the Empire warily. Like most of us here at The Fandomentals, I worship at the altar of The Legend of Korra. However, I was not a fan of Turf Wars. The pacing problems and character wonkiness made me worry whether the parts of the show I love could translate to comic books. Could they recapture the magic in this different medium?

Consider my fear temporarily stayed. Ruins of the Empire is the true follow-up I wanted back when Korra and Asami walked into the spirit portal. Let me start by saying that those who gave up on Turf Wars need not worry. Outside of a couple developments, Ruins picks up so perfectly from the end of The Legend of Korra that that you can basically walk into it without reading through its predecessor comic. Korra and Asami are an established couple exchanging “I love you’s” and Zhu Li being president now are the only real essentials.

Otherwise things are very much where the show left off. Kuvira has surrendered her Earth Empire and Wu has claimed his throne. He has begun his plans to abdicate said throne and establish democracy in the Earth Kingdom. However, holdouts of Kuvira’s army remain to cause trouble, namely a commander named Guan. With this remaining holdout threatening Wu’s efforts, Team Avatar heads to the Earth Kingdom to safeguard the elections. Along this ride, Kuvira’s trial begins and she comes along to help stop Guan, looking to prove her change.

Ruins of the Empire stays doggedly focused on this conflict, much to its benefit. Things move logically and engagingly from one page to the next. While the usual Bryke political silliness exists, it makes enough sense on a scene to scene level that it’s easy to ignore. That’s largely due to the heavily character-driven nature of the story, which allows the comic to play to Korra’s strength, which of course is the characters.

I should confess right now that I am a huge fan of Kuvira. Have no fear, this does not mean I try to justify her crimes or Leather Pants her. Rather I love how perfect a foil she is for Korra and I’m fascinated with the process by which she started out a hero before becoming a villain. I was most worried going into Ruins about her arc. Try to redeem her too hard and it comes across poorly. Keep her a villain and it could ruin the impact of Korra’s ending.

So far they have struck a perfect balance. Kuvira’s scripting is wonderful. She comes across genuinely repentant for her actions. She seems to realize that she went too far with the Earth Empire. At the same time, Kuvira remains exactly the same person she was before, with a lingering pride in what she accomplished and the necessity of it. She will be eager to undo her mistakes in one moment, but antagonistic in the next. Her underlying cockiness remains perfectly intact, to the point of openly mocking Team Avatar and seemingly trying to cause rifts between them.

While the Guan problem is the narrative conflict, Kuvira is very much the real conflict of Ruins so far. Everyone else feeds into the conflict she represents and feels exactly like the characters The Legend of Korra made fans love.

Korra herself is the biggest benefactor, in my opinion. After Turf Wars strangely dialed her back to Book 1 characterization, Ruins has her back in tune with her arc to end the series. She’s more assured, calm, and at peace with her identity and her role as the Avatar. She responds favorably to Kuvira’s offer to help with Guan, a choice perfectly in line with her recognizing parts of herself in Kuvira and also her newfound empathy towards her antagonists. Don’t get me wrong, Korra is still down for a fight. She just feels much more like the amazing character that ended the show than in Turf Wars.

Asami also shines rather strongly here. She feels immediately engaged and active in the plot. She has some fantastic confrontations with Kuvira, and her obvious anger over the death of her father come into play whenever she appears. There’s also a pretty terrific gadget moment for her towards the end. This is the Asami I know and love. Also while I totally understand the necessity of Turf Wars portraying their relationship how it did, I much prefer this version of Korrasami. The thing that made their relationship so strong in the series, even before they were really friends, was their ability to listen, understand, and respect each other even in disagreement. Ruins brings this dynamic back in force. They do not agree about Kuvira, but this doesn’t play as a source of cheap conflict. They listen, understand, and support each other. It’s exactly the dynamic that made people ship them to begin with.

I expect their agreement will be pushed to its test as Kuvira continues to push their boundaries. I’m not sure Kuvira is heading towards a real redemption here. Most likely she will be a protagonist by the end, but how much of one? Does she really understand what she’s done wrong and why it was wrong? Judging by this volume, she does not. Can she really redeem herself if she doesn’t understand what truly went wrong?

I also really appreciate how the non-violent nature of Guan’s plan allows Korra and Asami to stand out. Don’t get me wrong, I’m sure we’ll have a fight to end things. This is Avatar. However, right now a fight is a difficult option to choose. Having Guan seek power through Wu’s democratic ambitions makes violence a non-answer since violence would undermine the democracy Wu wants to establish. It’s a challenge to Korra’s newfound balance. As the most politically relevant and involved of Team Avatar besides Korra, it also presents challenge and opportunity to Asami.

I hope Ruins of the Empire doesn’t backtrack on this setup. They’ve established a strong conflict here. I’m not entirely sure where the idea of Toph running for governor will go, but I feel optimistic now. This is a natural follow-up point to the series. One of my big problems with Turf Wars was how out of place it felt. Moving directly into Kuvira’s trial and the resolution of Earth Kingdom instability is the sequel we really wanted.

Having a conflict about fascists using the democratic process also hits a strikingly relevant conflict to the real world. I understand why some people would worry about Michael Dante DiMartino’s ability to deliver on a political plot like this. After all, he and fellow Avatar creator Bryan Konietzko have never been great at politics. However, they are good at tying character arcs into said plots well enough to make up for their shortcomings.

Considering how good the characters are in this first volume, I feel like DiMartino will make it work well enough.

The highly focused nature of the plot also makes for a lack of moments for the rest of the characters. Mako and Bolin tag along, but don’t feature like Korra, Asami, and Kuvira. Bolin has a funny bit calling out his constantly shifting professions that will probably result in something by the end. Mako’s just…there. President Zhu Li doesn’t really offer any difference from Raiko yet.

This doesn’t bother me at all. I prefer a strong focus on a few key players. You can always use future comics to give the neglected characters their own stories. Others may wish other characters had more presence. Of course, we’ll see how others factor into the story moving forward.

Ultimately, the best thing I can say about Ruins of the Empire is that it feels like an episode of The Legend of Korra. I can think of no better compliment for a comic addition to the series. The conflict is a natural continuing point, the characters feel spot on, and even the art style strongly resembles the main series. Everything, from the strength to the flaws, are what you’d expect from watching the show.

I may have begun this issue a bit skeptically, but it converted me quickly. I can’t wait to see where Ruins of the Empire goes from here.

In this article:Legend of Korra, korrasami, comic review, Featured 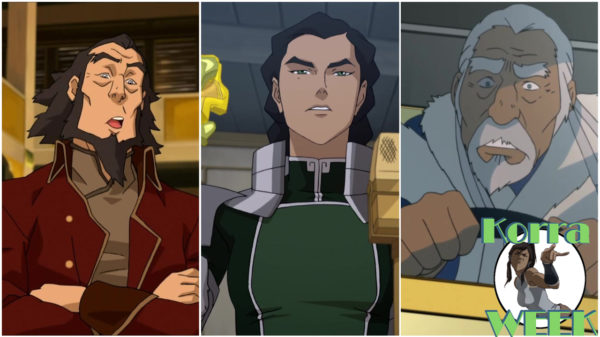 They called it the ship of dreams. Well, maybe only Dan called it that. But Korrasami is an incredibly popular ship around The Fandomentals,...