Red Rising - 14 Castes In A Novel Based Card Game 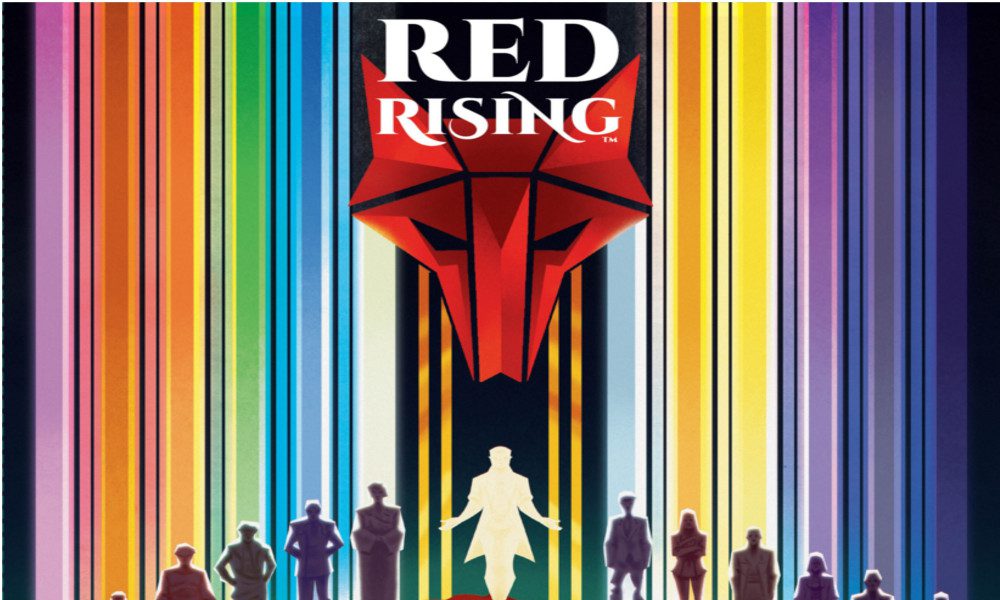 Red Rising is a hand management, combo card game for 1-6 players based on the book series by Pierce Brown. If you haven’t read the book, you should check out Andy’s thoughts on it here. The board game was announced earlier this year (2021), and has received a decent amount of attention among board game enthusiasts.  The game is published by Stonemaier Games (Scythe, Wingspan, Tapestry) and is designed by Alexander Schmidt II and Jamey Stegmaier.

The game places you in a futuristic universe featuring a dystopian society that is divided into 14 castes. You represent a house attempting to rise to power as you piece together a variety of followers represented by the cards you have in your hand.

How’s does it play?

In Red Rising, each player starts with 5 random character cards forming their hand and a random house tile that can give bonuses in some situations. The board includes 4 places to place cards down forming columns. On your turn you can either “lead” or “scout.” When you lead, you will choose a card from your hand to deploy onto the board placing it on any location and covering all but the name, color, and core value of the top card in that location.

If the card you place down has a deploy ability, you will then perform the action listed on that card.  All cards have different abilities, but even ones with seemingly ‘minimal’ initial effects can help you in the long run. When these slight moves propel you forward, they keep happening and you will with time seen the progression. To complete the lead action, you will then gain the top card from a location where you did not deploy a card this turn, and then gain that location’s bonus. Or you can gain the top card of the deck, then roll the Rising die and gain the resulting bonus from it.

Location bonuses will let you gain extra points at the end of the game and also triggers the end of game. Again, when taking a card from a section you will take its bonus. The blue section is Jupiter, which will advance you once onto the fleet track. The red section is Mars, by which you gain 1 helium token. The yellow section is Luna, and you gain or keep the sovereign token, which triggers the bonus on your house tile. The green is The Institute, and you place an influence cube on this location.

Similar to these location bonuses, the Rising die has bonuses as well. It can do the same 4 actions when the color is rolled. In addition, if the pink eye is rolled, you reveal the top card of the deck and place it on any location (not deploy it). The black “x” will have you banish the top card of a location of your choice.

To scout you will reveal the top card from the deck and place it (not deploy it) on any location, covering all but the top part of the top card in that location. You then gain that location’s bonus. Usually, you will only scout if you are satisfied with your hand toward the end of the game.

Players continue in a clockwise direction until all players have had the same number of turns and the end game conditions have been triggered. The end game is triggered when all 3 of specific conditions are met by any combination of players or when any 2 conditions are met by the same player. The conditions are: A player has 7 or more helium, a player has 7 or more influence, and a player reaches or surpasses 7 on the fleet track. Players will continue taking the same amount of turns after the end game is triggered. Player can then use the scorepad to tally up points to see who wins.

The basis of Red Rising the boardgame sounds great, you use cards and shuffle through a bunch of them until at the end you end the game with ones that will score you the most points. Although the basis of the game seems great, it seems to work better with more than 2-3 players. There are a lot of cards that add variety (and points!) and a lot of these cards match up with specific cards that need to come into play for them to work. If half of the deck never gets seen, many of the cards lose their abilities to grant points.

Still, the game does provide players with great components and artwork that adds clear value to this game. The colors on the cards make things pop and provides a great look and feel to the cards while playing.

Personally, I like how you are continually trying to get a better ending hand by trading and using cards to also grant points, but at the same time trying to not lose cards you want to keep while also finding newer better cards you want win your hand instead.

Red Rising is a game that gets better the more you play it because you learn not only which combos are good to have but also the abilities of cards as well as how each color works differently. Knowing the abilities cuts time off of the game and increases strategy, thus allowing players to feel more rewarded for how they end the game.

Now, Red Rising isn’t a perfect game as there tends to be some luck involved. Some cards can cause another player to lose a card from their hand, which can severely hinder them for the remainder of the game. There are cards to block these actions, but with so many cards in the game, it tends to be luck when you get them. There are also cards that will increase your hand size. Similarly, these cards can be lucky to get and I’ve played several games where I was looking for one of those cards and could never get one.

Another problem that other might have is that you tend to have to read a lot on the cards and try to figure out if they are good or not. It’s hard to figure things out at times when a player is new to the game, so a returning player will definitely have an advantage over a brand new player to the game.

To conclude, the game can be fast with returning players, but drags on a little with new players. While it’s easy to learn and has great production value, it works better when you have more players and can be irritating when luck happens to give other players cards you have been looking for.

In this article:Red Rising, boardgames, Featured The newest release from the folks at Ravensburger, Minecraft: Builders & Biomes moves the exploration, combat, and creativity of Minecraft off of the screen... How to Explain Boardgames To Anyone

In my experience board gaming as a hobby has always been very welcoming to new players at the game table. Recently I have seen... There are so many factors that have come into play when I first heard about Image comics newest release, DIE, that it is hard... Splendor is getting an expansion, and I’m here to explain why this is exciting. But first I have to explain board games, because here...