Let’s get one thing straight. The idea of zombies rampaging through late-Georgian Britain is ridiculous. Hell, zombies in and of themselves are ridiculous. Like all supernatural and fantastical story elements, they can be used to explore meaningful and serious themes, but let’s face it, if you’re going to have a film with zombies, it’s an uphill battle to get anyone to take it seriously.

This is the reason why tone is such an important issue in a film like Pride and Prejudice and Zombies. There are several angles you can take, I suppose. You could go for a dead serious tone: Super Serious Zombie Apocalypse Problem that needs to be solved. You can play it comedic: bunch of people obsessed with marriage and social status while ignoring zombies. You can play it romantic and do a “lovers in a dangerous time” thing.

The source material for this movie, the 2009 novel by Seth Grahame-Smith, went for the second option. The original text of the classic novel is occasionally interrupted by references to “unmentionables” and training in the deadly arts. Then, all of a sudden, it’s back to Pride and Prejudice. Like, this is the joke. Though, in my opinion, this is a joke that just can’t carry a whole novel. I never got through the whole thing; it just made me want to read Austen. And this seems to be a common thing. Many people I’ve talked to have said, “oh, I read half of it.”

This film, however, seems to be going for all three tones at different times, but can’t commit to any of them. I certainly don’t think this worked as a horror movie, or martial arts movie, or anything like that. The elements were there, but there was nothing special or memorable about it from that point of view. The comedic elements played more as comic-relief than as a consistent tone. Matt Smith as Mr. Collins, for example, was legitimately funny, but was clearly there to break the tension, not be a focus.

As for the seriousness and romance; I’m not sure how they managed to over-romanticize the relationship between Darcy and Elizabeth in a zombie movie, but they did. Flowery professions of love do not belong in Jane Austen, I believe I’ve said that before. Having Sam Riley jump into a pond won’t turn him into Colin Firth either, I’m afraid. Sorry. And any moments where maybe I was supposed to be taking the plight of zombie-infested Britain seriously were a little confusing. Like, was I supposed to take it seriously? I’m not sure.

I’m not sure who the intended audience is supposed to be. I doubt this will please monster movie fans, or comedy fans, or romance fans. Like I say, it’s one joke that gets old quite quickly.

I can’t really comment about this film as an adaptation of the novel, since I never read the whole thing, but even a reading of the plot on wikipedia suggests they made some major structural changes. There were random P&P lines reassignments. Mrs. Bennet just gets everyone’s lines, which is odd, but hardly a huge deal.

This doesn’t bug me so much as the rather confusing world-building. Perhaps this is all more clear in the book, but I spent most of the movie being unsure about whether or not Hertfordshire was behind the Great Barrier or in the In-Between. There was a map and everything, and I was still confused. The canal is the border between the In-Between and the wide-world, right?

And if all of Britain is overrun by zombies, how do people like Darcy get money from their estates in the north of England? Do zombies pay rent? How do people get through the hoards to get to ships to go to Japan/China to train in the Deadly Arts? Is the whole world infected, or only Britain and America? If it’s only them, then Japan/China is okay with all these possibly infected Britons coming to their temples and studying Wu Shu, or whatever?

There’s are several little details that also rather confuse me. Is it lack of attention to detail, or is it a feature? Like, characters who are clearly Anglican crossing themselves, or ladies in gowns riding astride. I suppose it’s possible that these are the result of societal changes that might reasonably accompany a zombie apocalypse. Or they didn’t care or know the difference. It could be either, really. And I’m quite sure they never called Elizabeth “Liz” in Jane Austen.

Given the radically different setting, it’s natural that the characters be quite different. Lily James’s Elizabeth is alright. I have no strong feelings one way or the other. The premise is that she is now a badass zombie slayer so… But Riley’s Darcy is quite a bit more… odd. And it’s not just the Batman voice. His role as a leader in the fight against the zombies gives the whole thing a bent that makes his actions entirely reasonable. Wanting to keep your friend away from a crush who’s possibly about to turn into a zombie isn’t quite snobbishness, is it? And Elizabeth’s objections to his cold-heartedness are understandable, but you do get the feeling that she’s allowing sentiment to cloud her judgement.

The plot with Wickham (not to spoil anything) is… odd. I cannot call it well done. Or in any way coherent. But I suppose a movie like this needs a big-bad more than a period morality tale does.

Lady Catherine DeBourgh is as close to a big-bad as P&P gets, I suppose, and turning her into a badass warrior with pantaloons and an eye patch was an interesting choice. Not that the film did a single thing with it. They seemed to think the casting itself was enough of a point. And her sudden respect for Elizabeth as a warrior and a woman was a little eye-rolling. 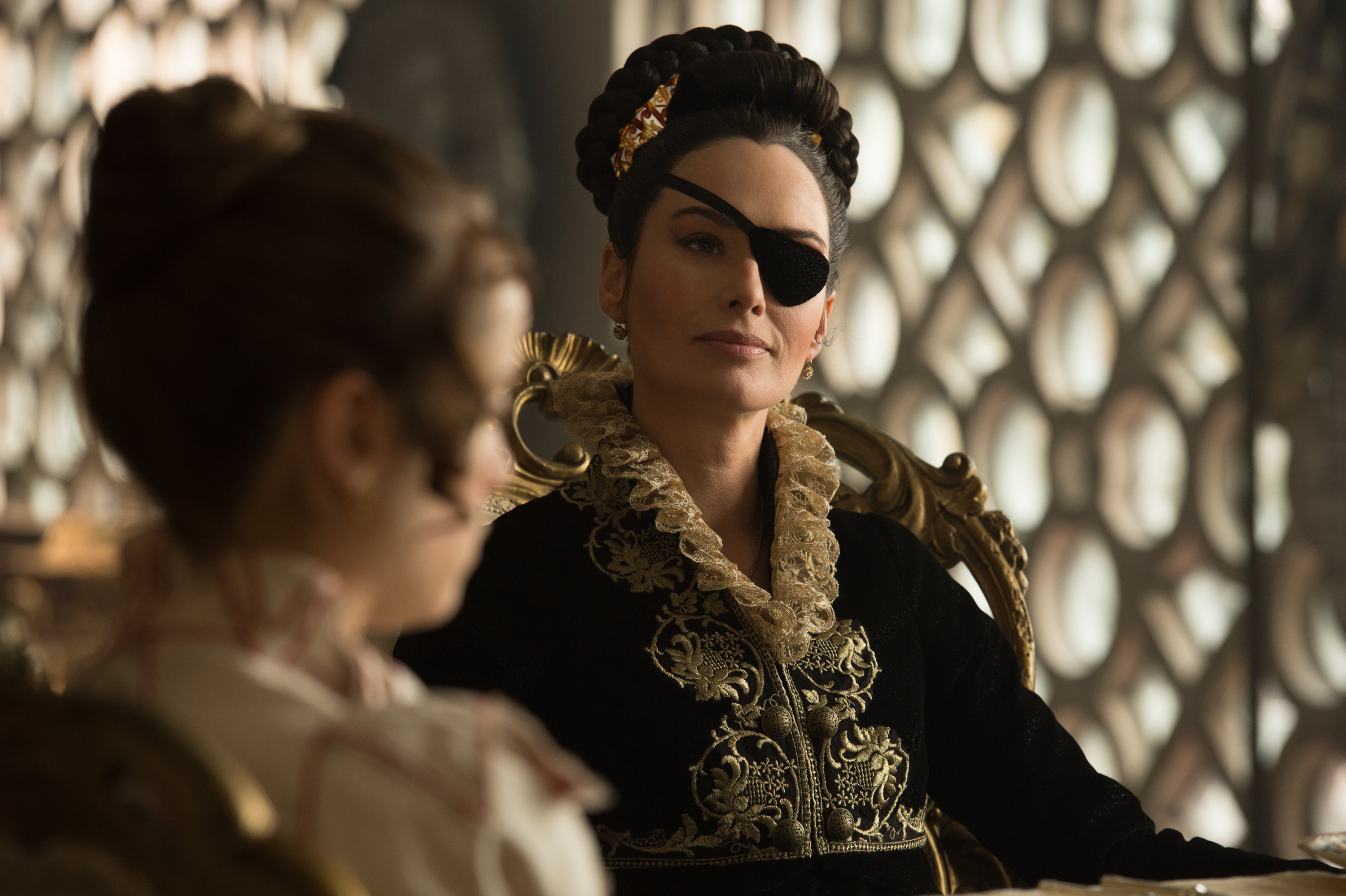 It’s very difficult to call this movie successful. It’s perfectly watchable, and has good production value, but it just flails about for nearly two hours, looking for a purpose and finding none.