Powerless is Charming, But Not That Funny Since it was announced last year, Powerless has gone through quite the roller-coaster before premiering last Thursday: from a fall season date that got pushed to midseason to its premise being completely revamped after alleged bad reviews, there are plenty of reasons to be doubtful of this show even before watching it. However, the things is: your concerns are valid, for this pilot hardly delivered what was promised.

In my defense, I do enjoy sitcoms and comedies. I endured the entirety of Two and a Half Men without ever thinking it to be a chore, besides The Office, Parks and Recreation, Community, Archer, Mom, and plenty more. On a regular basis, I rewatch episodes over and over again to pass the time, so trust me when I say that my standards for network comedies are not that high and I seriously am coming from a place of love towards this particular type of entertainment. 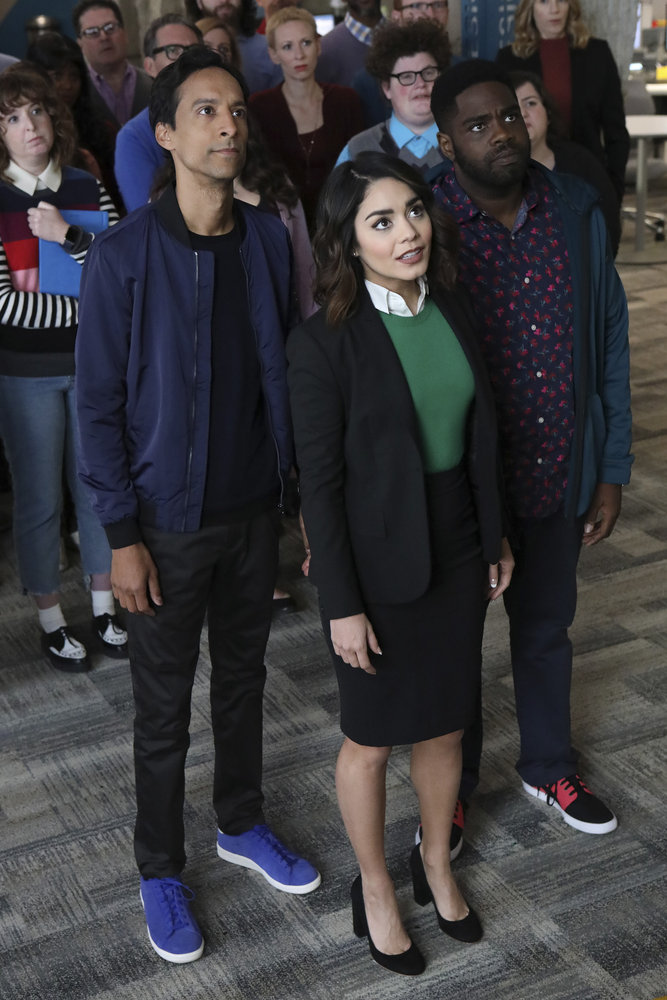 Unfortunately, Powerless didn’t do much for me and it is hard to explain why, especially because I actually wanted to enjoy this. It had advantages on the upfront like a pretty diverse cast, being in a DC world, and its workplace comedy nature, so I figured “Bingo! The comedy vacuum I feel in my heart may be fulfilled!”, which only hurt more the fact that I didn’t like it.

Powerless starts off with Vanessa Hudgens’s character, Emily Locke, taking her commute by train to her first day of work at a company that creates devices that can protect normal people from a world with superheroes and supervillains. Her ride is interrupted when a superpowered fight ensues and the tracks are destroyed, prompting Crimson Fox to save the day, but crushing someone’s car. Emily, brand new to Charm City, is enthralled by this event while the other passengers see it as a everyday disruption to their daily lives.

Emily is so the embodiment of the optimistic archetype she could very well be the Manic Pixie Dream Girl to the workplace’s Old Grumpy Man Who Needs To Have His Life Changed. Seriously, her workplace is a bunch of people who most likely hate their jobs to the core. The boss, Van Wayne, literally does thoroughly despise it: his aim is to be promoted to a job at Gotham City under Bruce Wayne, his less than interested cousin.

As she is still fascinated by everything and the thought of inspiring the Research & Devlopment department to come up with a big idea, she meets her co-workers/underlings. There is Teddy, played by Danny Pudi who, from what I saw, basically just shoehorned his Community character Abed Nadir into this one – so, a victim of typecasting. I don’t blame him a lot though: it really is hard to walk away from a role you are used to in the fans’ eyes. I know I felt the same way with Neil Patrick Harris in A Series of Unfortunate Events. Nonetheless, Teddy is on and off a dick the entire episode and is particular about picking the colors of devices, having a taste for “sangria” tones. 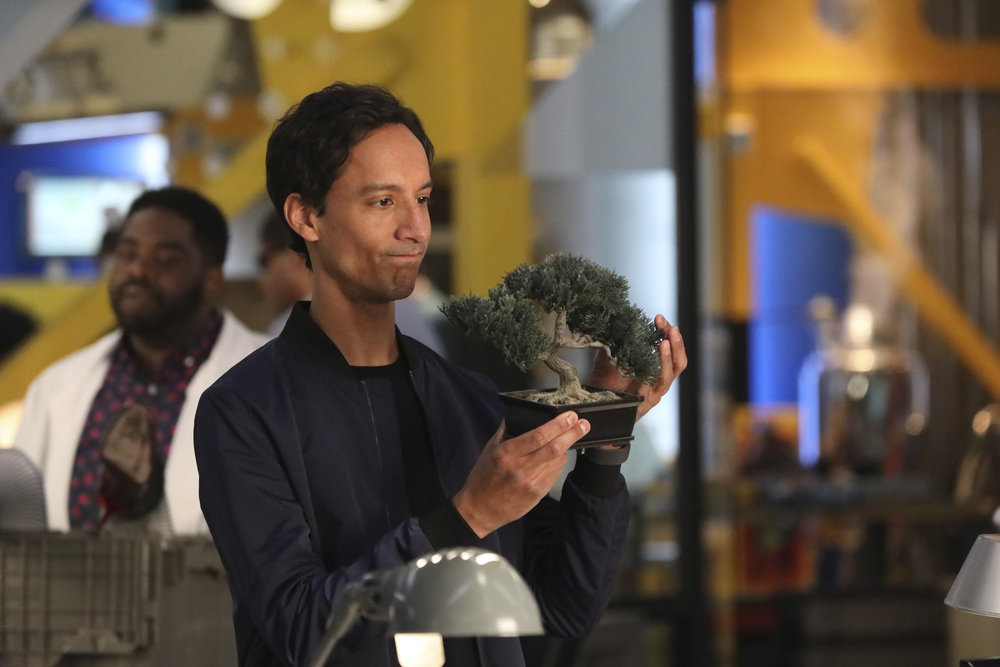 When it comes to Teddy’s co-workers, I didn’t really get too much of grip on Ron, but he seems to be the wild card/fun guy. Wendy’s main quality is her dislike/hatred of Emily. In fact, this is so on the face, that Wendy literally creates a device that beeps when Emily is around. Jackie is Van’s assistant and someone who has also lost her childlike wonder towards superheroes.

Emily tries her best, but is constantly shot down as she sees the bright idea she had concocted for this big Wayne Security company was not lived up to.

It’s not like the gang is without motive: apparently, their latest ideas have been shot down consistently for several reasons. Their grumpiness is justified, but also over the top. Take that and contrast with Emily’s upbeatness and it gets kind of annoying.

Van gets a call from Bruce Wayne telling him that the company is going to be shut down and he will be transferred to Gotham which makes him very happy. However, he didn’t count on Emily to come up with a device based of Wendy’s to track down DC villain Jack O’Lantern by scent.

This device is taken to Bruce Wayne who loves it and decides to keep the business alive and everyone’s jobs safe. Later on, there’s even a joke about how Batman conveniently used a similar device to track down and arrest the Joker. The characters obviously don’t make the connection and just laugh it off as coincidence. That was, if I recall correctly, the second time in this twenty minute pilot that I smiled/laughed and that’s the big problem with Powerless: it’s not funny. 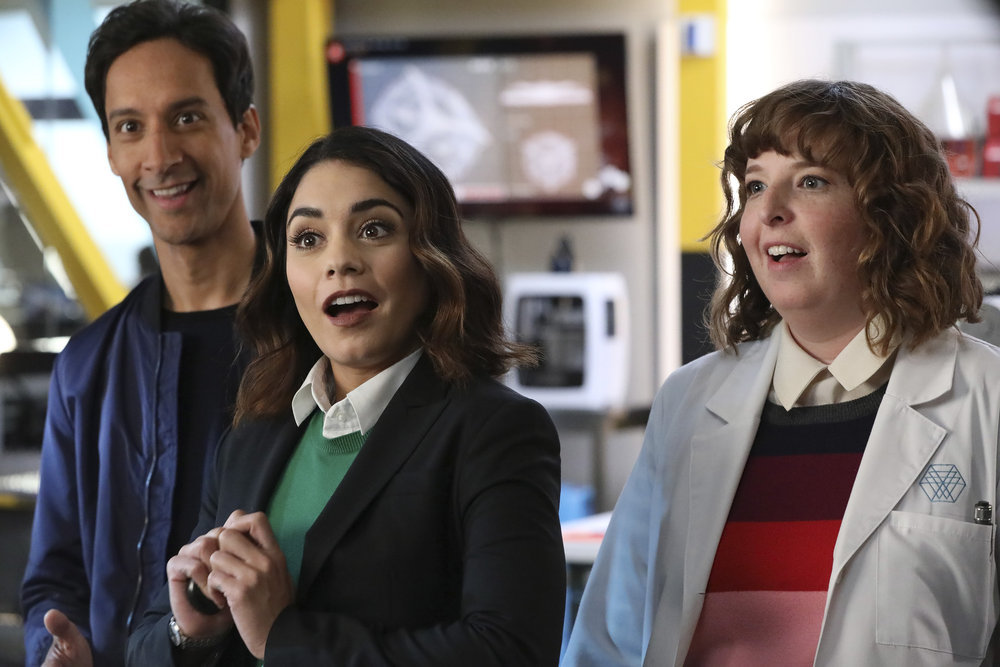 Maybe I’m being too harsh here: most of the pilots of the shows I absolutely LOVE nowadays weren’t great or even good. Gosh, the physical effort I had to make to finish season one of both The Office and Parks & Rec before they started getting good in season two… I definitely think that Powerless CAN improve. Personally, I would have rather watched the old pilot – the one where they work in an insurance company protecting people against collateral damage from superhero fights, which got some very great responses from some reviewers, but that’s not what we get here.

I am not quite sure yet about Powerless’s ability to go the long hall though: it had a slow premiere with a 1.1 rating in Adults 18-49, which is less than ideal for a premiere given how most shows actually drop after it. Maybe because it is a DC property, NBC will keep it on for a season or two, but we’ll have to see.

What’s for sure is that there is a LOT of room for improvement here. Let Powerless make the climb that other classic NBC shows have done and get a grip of itself and its actors strengths, making the characters less of caricatures and fully formed, and depending less on name dropping Bruce Wayne. Oh, and just make it funny, which I guess is too much to ask for a comedy. Overanalyzing Our First Look at Batwoman

Since the moment Batwoman’s inclusion in this year’s CW Elseworlds crossover became known, we here at the Fandomentals have approached it with varying levels... In the span of less than a week, Kate Kane has reached the absolute height of her cultural awareness…and then had her entire foundation...