Aside from Tatiana Maslany’s forever-mindblowing performances and the stinging, bleeding perfection of the Cophine love story, there are other reasons why Orphan Black is as powerful a storytelling machine as any literary piece of culture. It grapples with all manner of human existential questions, with the search for meaning and identity that some call “humanity.” A lot of art has been built around this search, including mythological and religious texts. And in Orphan Black, religion is our entry point with Helena.

In a show whose overarching themes are largely made up of exploring the matrix of nature and nurture in identity formation, as well as how science and the unexplainable interact, Helena is a potent flashpoint in the clone sestra-hood. She appears in season 1 as a villain with unknown motives. As the season progresses it is revealed that she was brought up in an extreme religious cult in Ukraine to believe that she is the Divine Original clone; that she is holy. Her hair is angelic-blonde while all of the other clones have dark hair. She cuts wing patterns into her back with razors as ritualistic self harm, as if to mark herself as an angel. Of all the clones, she possesses the most childlike innocence, yet is trained to be a vicious murderer.

A lot of mythical and religious stories run parallel to Helena’s: purity, grace and light juxtaposed with evil, vengeance and death. From the start of the series, Helena embodies these dichotomies. As her story develops, the complexities and meaning of her character carry the narrative of the show in important ways. 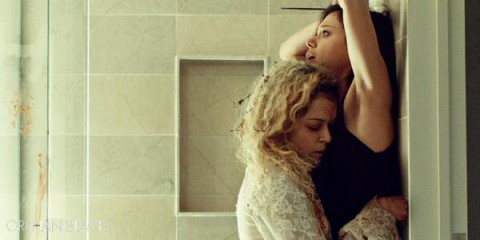 Let’s look at the fact that Helena has a twin, Sarah, which automatically throws a wrench into her perception of herself as the Divine Original. And yet she loves Sarah, from the moment she first sees her and is on the verge of killing her. For someone who has had no trouble carrying out assassinations on her other clones, Helena is surprised by Sarah. She believes their connection is of the divine without yet knowing that they actually shared a womb.

Sarah resists this connection, and may not feel it at all at first. In this way, the pair contrast each other with different manifestations of light/good and dark/evil. Sarah, with dark hair, a troubling past, but a protagonist’s good-hearted quest to protect her family; Helena, with light hair, a troubling past, and a villain’s mission to kill. Yet, as we see more and more in subsequent seasons, she has a drive to protect her family that may even surpass Sarah’s. Despite the fact that Sarah is the “main character” (as much as there is one), Helena is her literal twin, which connects them on a level different from the other clones.

Then, of course, there’s the fertility issue. In the Bible, the story of the Virgin Mary and the purity of being impregnated by God is undeniably central to the text. In Orphan Black, Sarah is the only clone to have reproduced. It’s revealed that she has been pregnant more than once, but the only child she carried to term is Kira. Kira’s prophet-like mystical qualities also play into this allegory, but that’s for another time.

Sarah certainly isn’t virginal in the literal sense, while Helena is. Both of them are fertile, yet Helena’s season 2 (and 3 and 4… it seems pretty everlasting) pregnancy is the result of a man who fancies himself a god—Henry Johanssen of the same Prolethean religious cult that Helena was raised in. In this way, she fulfills the symbolism of the Virgin Mary, yet the truth behind her livestock-like impregnation is infinitely dark and creepy. The fact that the show has a pretty wacked cult leader use his personal blend of religious extremism and devotion to science to justify using large-farm-animal-vet methods to first extract, fertilize, and then re-implant Helena’s eggs/embryos is a much more gruesome retelling of the Virgin Mary story.

Helena’s season 3 experience with the Proletheans is just one of many chapters in a life in which her agency is consistently stolen from her. Agency, both bodily and mental/emotional, is something that all of the clones, by the nature of their existence, must grapple with, and they all do it in different ways. Helena’s violent nature transforms as she moves through the seasons, from something that she was forced into to something she uses to reclaim her agency. That she had no say in how she got pregnant—though she did consent to the re-implantation of the embryos before she realized that Johanssen had fertilized them himself and that he had plans to impregnate multiple women with them, including his own daughter—is one way in which her agency was stolen from her.

While the Virgin Mary story is not as brutal as this, one could reasonably argue that Mary, whether voluntarily or not, sacrificed her bodily agency to the will of God in order to bear a prophet child. (Oh, patriarchal narrative, you’re everywhere). This is exactly what Helena—and, in various ways, all of the women on the show—goes through. Johanssen views the clones’s super-scientific existence as divine in itself, and wants to carry on creating them, perfecting them in his own twisted way. It’s the same goal that Neolution trumpets so very loudly, especially in season 4: perfection through genetic manipulation. Perfection as a path to higher purpose, higher value, higher existence. Making humans into gods.

Helena’s violent (and oh-so-perfect) revenge against Johanssen, namely taking from him the same kind of bodily agency he took from her and then burning the entire ranch down and running off with the nitrogen tank containing the rest of the embryos, was a reclamation of her power. She literally burned down the patriarchy, #praise. In a parallel storyline in season 3, Helena is kidnapped by the Castor military faction, who proceed to torture her, as a “stress test”, and imprison her with the goal of using her DNA to create a cure for the glitching Castor brains.

In this case, Helena maintains her power with her ability to focus her mind on Pupok, the figment of her mental landscape that manifests as a scorpion sidekick. The presence of Pupok keeps her mind above her physical prison and eventually helps her escape. So, even when she has no control at all in the physical world, she is able to reclaim her mental agency, leading to physical freedom. (At least from that particular captivity).

This in itself could be seen as a godly power. Also, despite the extreme physical ordeals she is put through in the military camp, in the desert when she runs away, and in many other instances afterward throughout the third and fourth seasons, her pregnancy does not seem to be in jeopardy. This plays into to divinity allegory as well. When combined with the undeniable existence of Kira’s mystical qualities, it points to what we can only assume will be an extraordinary birth and some extraordinary children. (Though it’s never safe to assume anything when it comes to Orphan Black). Violence is also something Helena not only engages in, but has been subjected to in very extreme ways in her life. In every season of Orphan Black, Helena experiences some type of violence that would kill most humans: impaled with Rebar, shot in the chest, sliced with knives, starved. She, of all the clones, seems the most immune to violence against her body, immortal even. This circles us back to her divine nature. Immortality and existing in a plane that seems to be above normal human suffering is a thread that runs through every major spiritual or religious text, and in stories grappling with the idea of godliness.

Let’s not forget that the clone experiment itself is rooted in mythology. Having taken the form of a swan, Zeus raped Leda, who then gave birth to twins who were half-human, half-god. Sarah and Helena are the only clones who are actually twins, and are also the only fertile clones. Professor Duncan reveals in season 2 that this makes them “failures,” as the clones were barren by design. Thus, their ability to bear children takes on an even more anointed tint. The fact that Helena is in turn pregnant with twins perpetuates the Leda mythology.

One of Orphan Black‘s pillar themes is the conflict between the pursuit of perfection within Neolution and all of its previous and current iterations with the inevitable messiness, chaos, and “sin” of human life. This could be described as “nature vs. nurture,” “science vs. spirituality” or “human vs. divine,” but these phrases are overly simplistic and binary. What exists in the show and in life is much more complex, a web of all of these categories. This web is itself the mystery that so much art is built on trying to understand. Thus, the character of Helena is not only a small piece within the bigger story of the Orphan Black mystery-web, but herself embodies it. It’s like Cosima’s sacred geometry tattoo: a pattern that repeats itself on large and small scales in every galaxy, and every molecule of our DNA. I don’t know if this is a new thing, but it seems like five seasons is a sweet spot for shows. Most (not all)... Not One, But a Few, and Family, Too

You Can Call Me by My Old Familiar Name

Orphan Black 5×09 Review, “One Fettered Slave” I know I ask this every week, but are you ok out there Clone Club? A lot...

Thank You For the Nurture: Orphan Black 5×08 Review, “Guillotines Decide”

How’s everyone doing out there, Clone Club? Does everyone have a good pillow to cry into and some tea to drink? Let’s all pour...