Previously on The 100, it was more of the same old, same old. Many important or at least fleshed-out Grounder characters died this season, a fact that should surprise absolutely no one. I am glad that my two faves Echo and Emori survived, but we lost the all-around awesome Roan and the longtime supporting character Nyko, plus Ilian. Not that I care at all about Ilian. What was even the point of his character/storyline existing? A drunken or otherwise unhinged Jasper could have blown up Arkadia in an attempt to convert everyone else to his morbid death cult, and if Octavia needed a hot Grounder to work out her grief over Lincoln with, there is a lovely one out there by the name of Niylah. 😉

The Grounder I am most disappointed we lost this season is Luna kom Floukru. Part of this is because of the way she was killed off, i.e. by turning her genocidal and making her the bad guy in 4×10. Luna took over Lincoln’s position as the show’s resident “good Grounder” after he died, but ended up being demonized. Though it is made clear that it is Skaikru’s fault that she reverted to her old ways, making them out to be the true villains, it also plays into the “Grounders are violent by nature” stereotype. Especially since Luna waxes on about how she ran from what she truly was. Gretchen has already written a lot about the colonialist implications inherent in that stereotype and about Luna’s character assassination, so I will direct you there for further discussion of this point.

My biggest beef with the situation, however, is how wasteful it is. Luna was a compelling character who had an interesting backstory and connections with multiple characters. A character who had been mentioned on the show several times since season 1, long before she actually graced our screens. Luna was a beacon of hope for those seeking a life free of violence, and even once Floukru was destroyed, she had a peaceful aura about her that made others open up to her. It is especially tragic to me that Octavia was the one to kill Luna, seeing as she and Lincoln were the first to seek her out. But I guess that was the show’s way of bringing it full circle.

Octavia to Luna: You’re wrong. There are people worth saving. Just not you.

But that was a circle that needn’t be closed. Luna didn’t need to be at the Conclave. She could have run away to somewhere on Becca’s island and then shown up again in the finale. How did she even get to Polis, anyway? Did she swim? Find a boat? Build a boat? We have no clue. She could also have returned to Polis and chosen not to fight, and ended up surviving Praimfaya so long as she found shelter from the initial death wave (Madi did it, so why couldn’t she?). Or she could have guilted/blackmailed her way into the bunker after what Skaikru did to her on the island, or even taken the Flame and ensured her own survival that way.

In terms of plot convenience, Luna going Jasper-but-more-murdery occurred to set up Clarke’s decision to have Skaikru steal the bunker during the Conclave in case Luna won. But it was not necessary. Let’s be honest, Skaikru could have locked everyone out of the bunker even without the threat of humanity’s annihilation coming from Luna. Jaha found the bunker and probably thinks of it as rightfully Skaikru’s. He doesn’t give a damn about anyone who is not Skaikru anyway. If I’m being especially salty, the only reason it needed to be Clarke’s idea was to make her look bad compared to Bellamy and prop up his shaky redemption arc.

Now let us reminisce on what could have been. I have written some alternative scenarios for what could have come of Luna this season had she not been killed off, along with the implications for season 5 and the six years between.

Luna goes into hiding on the island after being harvested for her bone marrow against her will. She finds the bunker she heard Murphy and Emori talking about and takes shelter from the death wave, hoping her nightblood will allow her to survive the aftermath. She steals the suit Abby would have worn to space, just in case. In 4×13, she hears Monty and Murphy removing the oxygenator and goes outside to investigate, then decides to help Murphy carry it back because of Monty’s burned hands.

Monty still passes out from the pain and Murphy and Bellamy still have to go get him. Luna could turn back and hope whatever oxygen is left in the bunker will sustain her or just stay in the lab for shelter, but Raven talks her into coming up to space with them. Everything else works out the same except Luna is now part of the group sharing oxygen with Raven.

This is my ideal scenario, for many reasons. For one, Sea Mechanic. I love Raven and Luna’s connection, and we barely had time to explore that. It had a ton of potential, whether in a romantic or platonic way, and that potential was wasted for no good reason. Still on a shippy note, were Luna up there it would even out the number of people on the Ark and would put all three of my favorite ships up there together (the others being Memori and Becho). But Luna didn’t only have a connection with Raven. Even with Clarke ending up on the ground, there were others Luna had a history with in that group, people who actually made it to space. Luna’s scenes with John Murphy in 4×06 set the table for an interesting relationship between two people haunted by their pasts, one that could have really flourished in close quarters on the Ark. And she also had a connection with Murphy’s girlfriend Emori after she and Raven stood up for her when Clarke and Abby were ready to test a radiation cure on her.

In general, it would have been nice to see one more Grounder in the mix on the Ark, and I think Luna could have been a calming influence on both the often (rightfully) paranoid Emori and the newly distraught and disoriented Echo. On that note, as much as I loved Bellamy talking Echo down and getting through to Raven, Luna would have also done well in those conversations. Raven and Bell had a lot more history than Luna and Raven, but Luna had more than proved herself as someone who can get through to Raven. And as a fellow Grounder, Luna may have been even more equipped to help Echo than Bellamy was. (But I am still glad it was Bellamy who did it because reasons.)

2) Luna survives Praimfaya on the ground

The same lead up as scenario 1, only Raven is not able to talk Luna into coming to space. She stays in the lab, and shortly after launch Clarke runs in with her face covered in lesions and passes out in front of her. Luna is left with Clarke at her mercy, having a chance to take revenge for her part in the harvesting or to help her.

Whatever Luna decides to do initially, I don’t see her killing Clarke, so this sets up a scenario where they are forced into an alliance by virtue of being the only two people left alive on the earth’s surface (that they know of). I’m not sure that Clarke and Luna would get involved in any non-platonic way after all the breaches of trust between them and their generally ‘colorful’ history, but either way they would be badass nightblood co-parents to Madi once they found her. The idea of Clarke and Luna as co-parents really excites me because they are both intense women with strong ideals, yet Clarke has an even stronger pragmatic streak. I feel like they would butt heads a lot but share a love for this small girl and ultimately put their differences aside for the good of a child.

Luna shows up in Polis without the intention of annihilating the human race and is offered the Flame, being a true Nightblood (unlike Clarke). She comes to the same conclusion as Octavia did re. everyone sharing the bunker, the same solution Clarke was pushing for before her ascension was interrupted. So things carry on much the same only with Roan and Ilian also still alive and Echo not being banished from Azgeda. Either a) no one attacks Bellamy, Clarke, and Memori on their way to the island but they encounter some other delay or b) Echo is kicked out for some other reason (let’s be real, she’s kind of a sh*t disturber) and saves them from the attack as she did in canon, so that group still makes it to space except for Clarke.

This scenario addresses that same “Luna running away from who she was” theme I mentioned in the opener, but without destroying her character. She was originally trained to be Heda and ran from the Conclave, but returns to do her duty to her people. It also brings another aspect of her arc full circle: after refusing to take the Flame for the sake of humanity last season, she learns from that mistake and does so now.

This arguably is the best scenario for Luna’s character development, but it’s at the expense of Octavia becoming a Flame-less Heda as in canon. But Octavia didn’t really want that job anyway, so that’s not a big deal. Instead she dumps Farmer Boring and shacks up with Niylah because Niytavia is adorable. Or Luna gets together with Niylah and they can be morally superior to everyone, but in a nice way. They become the Mom Friends of the entire bunker.

These solutions are just three of many ways the writers could have kept Luna alive for next season and beyond. I thought of several more, but we could be here all day. Clearly there was much potential for stories and relationships being deepened, potential that was squandered by the decision to have her participate in the final Conclave. It can’t be undone now, but if nothing else, I hope I have inspired some new headcanons and fanfic ideas for those of us who wanted Luna to stick around. 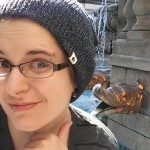 Lisa is a gay(ish) writer and stand-up comedian from Canada's west coast. A longtime fanfic author who recently made the jump to journalism, she is prone to gush ad nauseum about her OTPs. Stubbornly Watsonian and literal, she can't stand characterization and continuity errors.

Week of Pandemonium: Up Close With An Infernal Machine