Lord of the Rings Re-Read: At the Sign of the Prancing Pony Not a great outing for our hobbits. Within a day of being nearly murdered by a barrow-wight, our hobbits are remarkably lackadaisical in “At the Sign of the Prancing Pony.” After some drinks, stories, impromptu singing, and a round of jaunty dancing on a table, Frodo pulls a Bilbo and nearly blows the whole mission. Let’s all take a moment to quietly applaud Strider for not taking one look at this fellowship of hobbits, booking it out of there, and saving himself some grief. Just kidding! Sort of!

Bree and the Prancing Pony

For me, the most intriguing part of this chapter – which is a transitional one in a lot of ways – was the location of Bree. It’s not a place I had thought much about before. At the start of the chapter Bree seems to be a nice sort of utopian village:

The Men of Bree were brown-haired, broad, and rather short, cheerful and independent: they belonged to nobody but themselves; but they were more friendly and familiar with Hobbits, Dwarves, Elves, and other inhabitants of the world about them than was (or is) usual with Big People.

Bree is presented in a way that must have been very impressive to our hobbits. It’s a kind of crossroads: Bree is bisected not only by the East Road the hobbits had traveled on, but by an ancient road leading south to Isengard and Rohan. Rangers roam the countryside and stop in the Prancing Pony to tell stories (but also keep their distance). The hobbits claim to be the oldest settlement of their kind in the entirety of Middle Earth, and the men of Bree claim to be descended from the first men. Even when the Numenorians returned over the great sea, the men of Bree claim, “they had found the Bree-men still there, and they were still there now, when the memory of the old Kings had faded into the grass.”

Bree seems pretty much perfect at first glance: lots of history, a decent amount of diversity and worldliness, all paired with a warm friendliness. As soon as the hobbits show up they are showered with attention and drinks, and a fellow group of Underhills decide to adopt Frodo as their long-lost cousin.

But it’s amazing how quickly all of this falls apart. The worldliness and vibrant travel scene around Bree seems to be a thing of the past: the north-south road is overgrown with weeds, and Barliman is surprised to find a group of men traveling on it – much less the group of dwarves coming in from the east. When it’s mentioned that vague problems in the south could create growing waves of refugees coming to Bree, “the local inhabitants did not look pleased at the prospect.” And most clearly, as soon as Frodo pulls his disappearing trick near the chapter’s end, the town’s friendliness evaporates immediately. Any sign of oddity does not play well in Bree (even the Rangers, to whom everyone seems sufficiently accustomed, are kept at arm’s distance). For a place that seems worlds away from the culture of the Shire, it proves to be not all that different at its core.

Though we’re far away from the Old Forest and the Barrow Downs, this depiction of Bree presents a nice thread of thematic continuity: just like the hobbits’ earlier stops, Bree proves to be not what it first appears, and deceptively dangerous (and in a nice twist, this trend will be turned on its head in the next chapter when the apparently dangerous Strider turns out to a godsend for the hobbits. With this twist, the next stage of the adventure is launched).

Though I was rather hard on our hobbits at the start of this essay, they all get nice moments in “At the Sign of the Prancing Pony.” Pippin gets his first solid ‘fool of a Took’ moment when he starts telling the story of Bilbo’s birthday party – correct me if I’m wrong, but this seems like Pippin’s first actual misstep in the story. While Jackson’s adaptations tend to portray him as a bit dim-witted, Pippin’s problems seem to stem more from the fact that he’s very light-hearted (which I’m sure will serve him well further along). Sam continues to be sweet and relatable. I love that he was able to deal with a barrow wight last chapter, and he admits here that “he had imagined himself meeting giants taller than trees, and other creatures even more terrifying, sometime or other in the course of his journey,” but the idea of a strange, three-story inn is just too much for him to handle after a long day of traveling. We’ve all been there, Sam. I am happy that he got some good beer, at least. And Merry, once again, proves to have by far the best judgment when he decides to stay out of the common area and have a nice quiet night by the fire. He’s a hobbit with a head on his shoulders (and, in avoiding loud bars in favor of quiet sitting, a hobbit after my own heart).

Frodo, though, has the most interesting characterization in this chapter. At first I was just annoyed with him: he acts rashly by just going out into the common area, and things get worse from there. After fearing Pippin is going to come too close to matters of the Ring, Frodo decides to divert attention by jumping up on a table, singing a lengthy nursery rhyme, and spontaneously creating a dance routine. He promptly dances too hard, falls off a table, and puts on the Ring in front of a giant crowd of people. PULL YOURSELF TOGETHER, FRODO.

It’s a dumb move, definitely, but it also makes some sense. It also does a nice job of highlighting Frodo’s character, and why Bilbo would have felt him to be a kindred spirit. After a moment of awkwardness, Frodo just dives right into the performance. And he clearly loves it when he gets an ovation and calls for an encore. It’s a very Bilbo-esque moment of self-satisfaction (particularly given the crowd plied him with some extra drinks), and the sudden turn into danger it takes fits well the first half of The Fellowship of the Ring’s tendency to flit back and forth between the whimsical and the very serious. 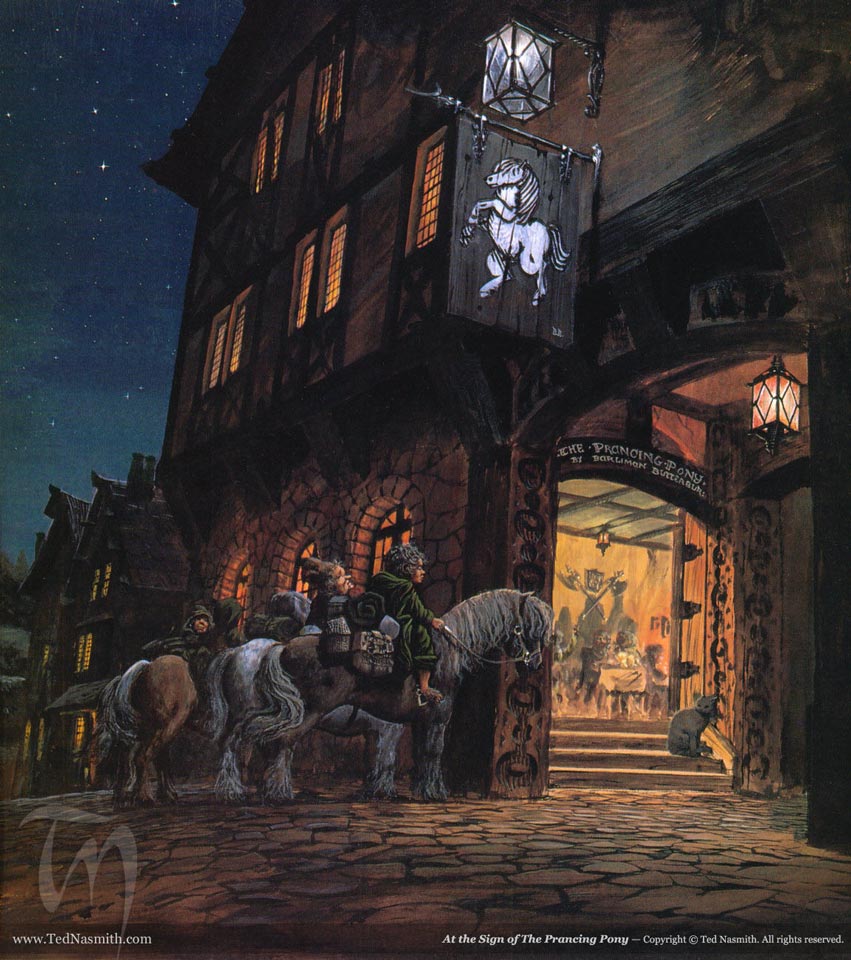 A strange-looking, weather-beaten man, sitting in the shadows near the wall, was also listening intently to the hobbit talk. He had a tall tankard in front of him, and was smoking a long-stemmed pipe curiously carved. His legs were stretched out before him, showing high boots of supple leather that fitted him well, but had seen much wear and were now caked with mud… He threw back his hood, showing a shaggy head of dark hair flecked with grey, and in a pale stern face a pair of keen grey eyes.

And, of course, we finally get to meet Strider! We learn relatively little about him so far, other than that he has some mysterious interest in the hobbits, and that he is dreamy. He’s also more teasing than I expected him to be: he stays very hands-off, letting Frodo handle his own problems, and seeming rather unconcerned when things go so poorly.

In this article:Lord of the Rings, lotr reread