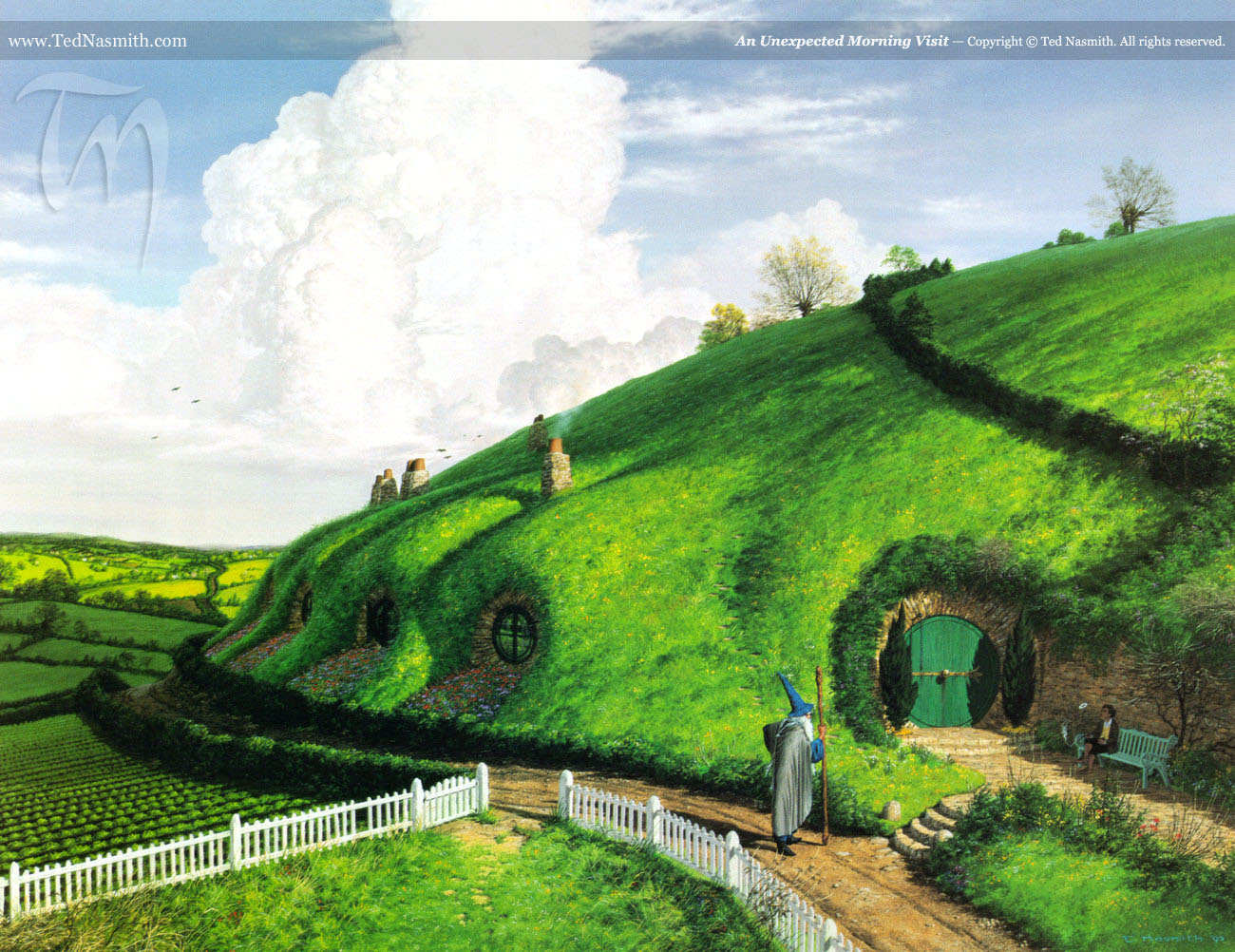 I was given my first copy of The Hobbit for Christmas, probably when I was about 8 or 9 years old. I remember it very clearly. Black cover, green lettering. Bilbo, before he had been transformed into small, amiable Martin Freeman, looks more like Game of Thrones’s Sam, if he had gotten older and stolen Jon Snow’s hair. Gollum is a tall and gangly demon creature, with a sharp hook nose and odd, marble-esque eyes. Sting appears have been crafted from styrofoam.

My dad read The Hobbit and The Lord of the Rings to me shortly afterwards: I loved the former, and the latter flew solidly over my head. I remember thinking Merry & Pippin were cool, and I inexplicably remember vast swaths of the story as taking place in the middle of a jungle. I enjoyed it well enough, then promptly forgot about it for four years.

I picked up The Fellowship of the Ring again when I was about twelve years old. Books, in general were Very Important™ to me at that point in my life. I took them very Seriously, and the characters and narratives within them would weave their way into how I thought about the real world: people, politics, places, even abstract intangible things like how the sky looked at a particular time. Stories seemed to be everywhere, banging into each other. So, I kept a detailed ranking system of all the books I read, the sort where books would receive agonized-over rankings like 8.25 stars. I was a very specific kind of kid.

The Fellowship of the Ring, followed quickly by the rest of Tolkien, became the book that was the Most Important™. I can convey the enormity of this to you by revealing that in my notebook, they all received a score that was truly unprecedented: 10+. I re-read them every year at Christmas, like a weird sort of literary ritual, until I was eighteen. I haven’t re-read them since.

And now I’ll be reading them again, here at Fandom Following. I’m a little frightened, honestly! It’s been nearly ten years since the last time I picked these books up, and I’m not sure if I’ll be looking at them in quite the same way. But that will be part of the fun of this project: I’ll be going through chapter by chapter and I’ll touch on both my own personal reaction as well as larger thematic issues like where Tolkien fits into the fantasy canon, how his medievalist training affected his work, the role of race and gender in his work, and various other topics that arise along the way. Accompanying pictures – including the one above – will be mostly from Ted Nasmith, who kindly let me repost his artwork here. He’s my favorite Tolkien-inspired artist and on occasion I may write on his paintings a bit too.

Here are some of the main ideas I’ll be focusing on:

The Lord of the Rings as a fantasy classic. Tolkien is often cited as the founder of modern fantasy, which is a fascinating concept to me. Pick up your average epic fantasy from the last few years off the library shelves, and you’ll almost definitely find that the author is indebted to Tolkien but is also writing a very, very different sort of story. Why were some aspects of Tolkien picked up by modern fantasy authors, while others were passed by? Is Tolkien still ‘relevant?’ Does that matter?

The role of gender and race in The Lord of the Rings. Both of these have come under fire in recent years, particularly in the wake of Peter Jackson’s adaptation. How exactly are women and different races portrayed in the story? To what extent does a fantasy setting impact the treatment of race and gender issues? And to what extent should Tolkien’s context or intent be considered in addressing these matter?

The sense of time in The Lord of the Rings. Tolkien mentions in the foreword to the American paperback edition that this story hovers in between The Hobbit and the broader mythology of Tolkien’s mind (that would later appear in The Silmarillion and elsewhere). “The story was drawn irresistibly towards the older world,” he wrote, and it became an account of “its end and passing away before the beginning and middle had been told.” This sense of broad swaths of time that hang just beyond the narrative edges of Lord of the Rings has always been one of my favorite things about it, and I’ll look into how and why Tolkien does it as we go.

And finally, The Lord of the Rings and its pacing. It’s the biggest complaint I hear from people who wanted to get into Tolkien, but couldn’t. I’m sure you’ve heard it before. “The beginning is… slow,” someone will say, clearly trying to prevent an angry and defensive outburst from me. This is true! Tolkien’s pacing, for better or worse, is not modern narrative pacing. I’ll be considering why, and what that means. As well as Tolkien’s delightful statement in his forward that one of his main regrets is that “the book is too short.” You tell ‘em, Tolkien! But someone, somewhere, is preparing a lengthy attack on this idea already, with aggressive citations of every mention of Tom Bombadil.

Next time: “A Long Expected Party.” Will I be surprised to remember how old Frodo actually is in the books? Will Bilbo’s speech be as funny as I remember? Will my weird crush on Merry remain intact after all these years? Tune in to find out.

If you’re kind and leave lots of comments here perhaps I’ll also include a lengthy treatise on “Concerning Hobbits,” particularly all my feelings on pipe-weed and a detailed analysis of the Shire’s political structure. Just kidding! Kind of!

In this article:Lord of the Rings CatJanuary 12, 2019
We use cookies on our website to give you the most relevant experience by remembering your preferences and repeat visits. By clicking “Accept”, you consent to the use of ALL the cookies.
Do not sell my personal information.
Cookie SettingsAccept
Manage consent