In “Camelot 3000”, the Legends go back in time in their quest to stop the Legion of Doom from obtaining the Spear of Destiny and rewriting reality.

The episode dives in a futuristic Detroit in the year 3000. Rip Hunter meets with a still alive Dr. Midnite from the Justice Society of America. Rip eyes a device that can control other people, but gets to the point: he wants Dr. Midnite’s piece of the Spear of Destiny. As the retired superhero says Rip will never find it, the villain concludes the spear is hidden within Dr. Midnite’s body and proceeds to kill him.

This takes us to the Waverider, where Sara Lance tells everyone that Lily Stein’s algorithm worked and the ship finally tracked one of the pieces of the Spear, which also leads them to Detroit. They find Dr. Midnite’s body with “RIP” written in blood on the floor. 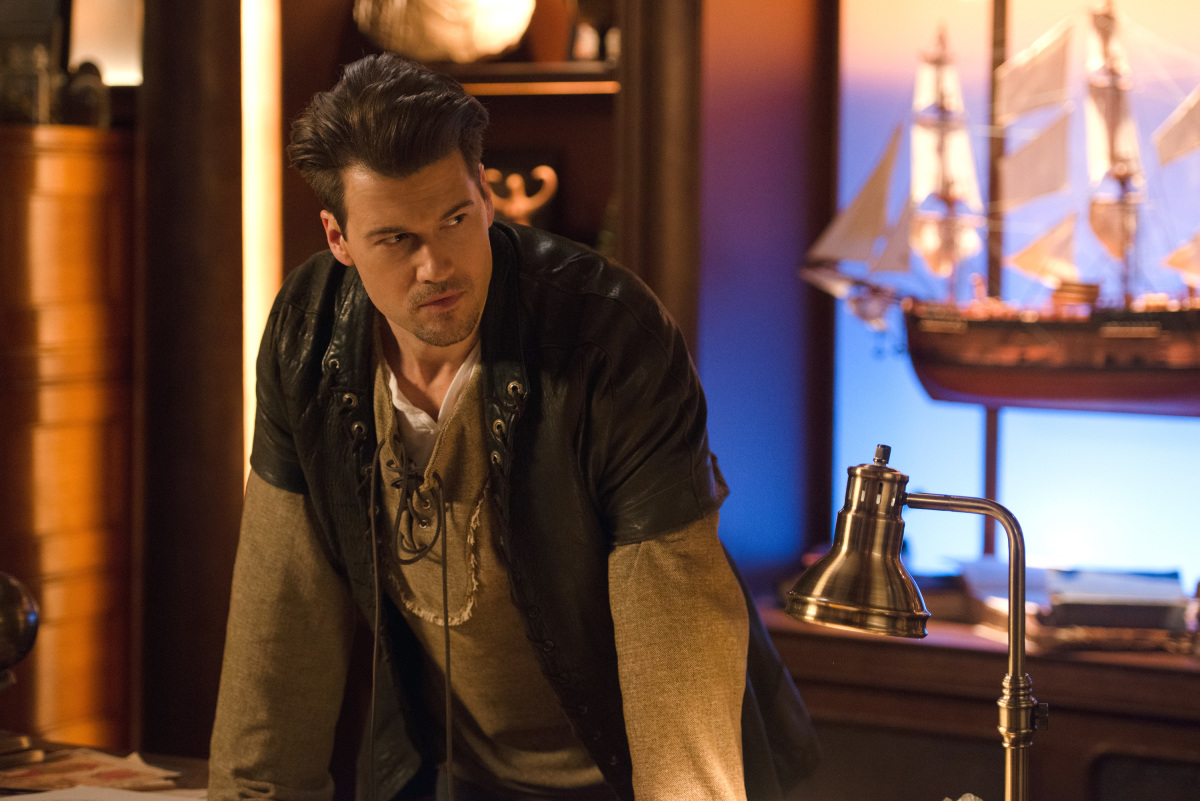 As Amaya is taken aback by seeing her old partner in anti-crime, she ends up starting an argument with Sara about her not letting Jax kill Hunter last episode which would have avoided Dr. Midnite’s death. Also, Amaya and Nate spend the entire episode eyerollingly bickering as a probable result of her alleged lack of interest in a relationship, but the audience knows it’s all just a grand case of misunderstandings and miscommunications.

The setting changes as the algorithm finds another piece in medieval Great Britain, and we are taken to Arthurian times. Ray is revealed to be a big fanboy of the tales of Knights of The Round Table, saying those saved his childhood. Meanwhile, Mick finds out that Martin stole half a piece from the same device Rip eyed at Dr. Midnite’s lab, which spoiler alert, he also stole a complete set (it works as a two piece: one attached to the heads of the controller and controllee).

Our Legends walk through the woods as they try locating the Spear and are stopped by knights lead by an amazing Queen Guinevere in full body armor. Ray asks for safe passage and a session with King Arthur, and she concedes.

Guinevere takes the gang to the court as they meet the noble King Arthur and the Knights. They explain that they are after a force of evil, to which Arthur summons Merlin and, surprise!, it’s Star Girl, another member from the JSA. She explains to Amaya and the Legends that the JSA’s last mission was to retrieve the spear in Germany, lead by Rip Hunter, and that they broke it in pieces and separated them through time along with the society’s members as protectors. Star Girl/Courtney says her piece is in the court, but won’t say where because she is still holding her oath to protect it.

Guinevere has a nice moment with Sara, filled with sexual tension, discussions about bravery and how she much prefers to be a warrior than a politician, and some more shots of sexual tension. Needless to say, I’m all for it: it had been a while since Sara, the ship’s Casanova, had another fling with a said heterosexual historic figure just for the sake of it.

Meanwhile, King Arthur is having a sword fight with a Dark Knight. Arthur loses its grip and is surrendered by the knight who reveals himself as Damian Darhk who is in the good company of Rip Hunter. At the court, Ray is fangirling over Sir Galahad, the purest knight of all, when Arthur arrives with some other fighters, completely emotionless as Rip is using the device to mind control them. A fight starts with Sara and everyone joins in, having casualties on both sides, but the biggest one is definitely Sir Galahad, killed by Arthur himself. Damian retreats with an ultimatum: they must deliver the spear or Camelot will go down.

Ray is visibly sad and distraught with Sir Galahad’s death, while Guinevere is having doubts about her position as Queen and how she must be the one to lead the attack against Damian. Sara gives her a nice pep talk that is, once again, sparkling with sexual tension, but the message is still quite clear: Guinevere must believe in herself and her competence and thus inspire her folk to do the same. 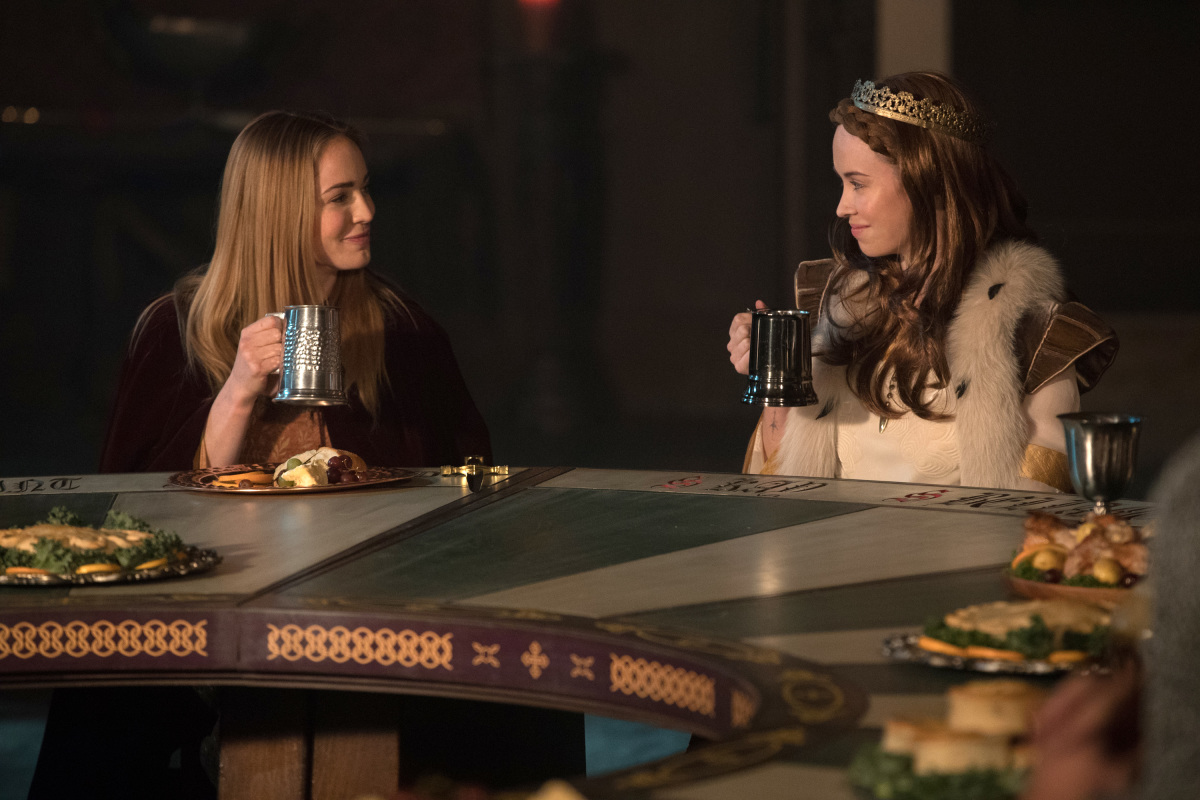 Back at the Waverider, Martin is having trouble with the device he stole. Thankfully, Sara managed to grab one from a dead knight and gave it to him. Dr. Martin knows what to do and has a plan—using the controller piece to tap into Rip’s devices and make them stop—but he fails on his attempt at controlling Mick.

It’s the eleventh hour and the Knights of Camelot are ready for the fight. Guinevere takes all her public speaking skills along with some self-love/patriotism and successfully delivers a heartfelt speech, inspiring the warriors to fight for their land. Oh, and Ray wants to fight for Camelot, which is troublesome because Nate checks out one of his books on the Arthurian legends and sees an illustration of Ray’s funeral.

Amaya takes the amulet to track the spear herself and finds it: it is attached to Excalibur which is (still? what?) penetrating the big rock inside the castle. She taps into her gorilla/bear/beast powers and takes it out, detaching the spear with success. She is interrupted by Star Girl. They have a semi pointless discussion where SG initially doesn’t want to give the Spear to Amaya, she tells her she fell in love with Arthur, found a home in Camelot, and is still sworn to protect the piece. In the end, Amaya manages to convince Star Girl to give her the Spear, relieving her of her duties, but still letting her stay at her new home.

Guinevere knighted Ray (Sir Ray of Palms, who made a discount!lightsaber with Galahad’s sword and his suit), while Nate’s death warning did nothing to dissuade him, the Legends have a (pointless) altercation about whether to leave with the spear or staying to fight along Ray and the Knights. They convince Sara to allow them to stay and fight while Martin, Mick, and Jax figure out how to work the device and stop them. 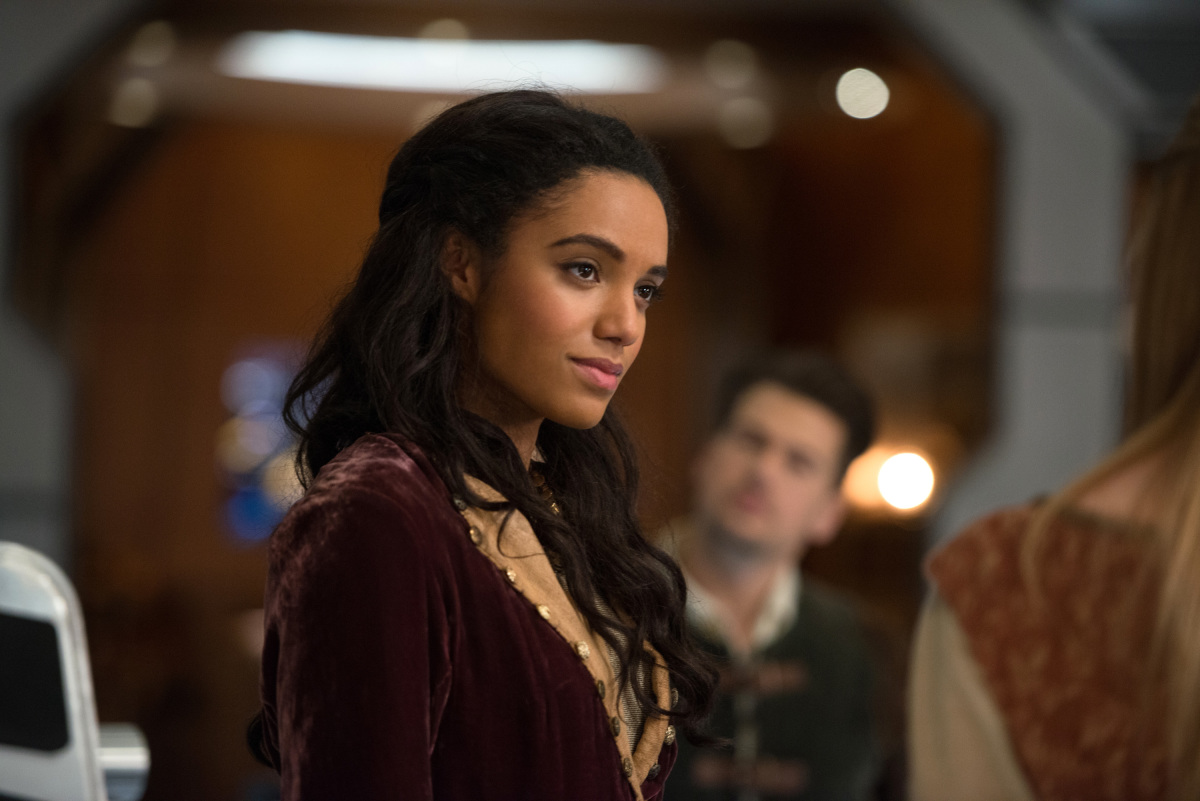 The fight begins rights as Sara, Amaya, and Nate join the Camelot people (Cameloteans?). Mick manages to use his deep emotions and internal issues to overload the device’s wifi, I’m assuming, and Rip’s control ends. He is unhorsed by Ray and left to die by Damian Darhk, who flees to the woods followed by Palmer. There, the two fight and Ray is able to win, until Damian shoots a blaster at his chest, which doesn’t kill him because he was wearing the Atom suit, but allows for Darhk to escape.

Sara meets Guinevere to say goodbye, but they are interrupted by a cockblocker Ray Palmer just as they are about to kiss—Guinevere is even blushing and doesn’t want Sara to go! Feeling the mood is done, she exits the tent, but Ray, determined not to be a cockblocker, tells her that “every good legend ends with a kiss.” Feeling inspired, Sara goes back and kisses Guinevere before leaving for real.

Finally, at the Waverider, Rip is being held at a cell after Sara spared his life. Jax confronts him and tells him he isn’t the captain anymore and he won’t hesitate to kill Rip if he hurts anyone from the crew. As Jax leaves, Rip communicates with Gideon, who calls him “Captain.”

Is this the last we’ve seen of Camelot? Probably not since it is showed that in Nate’s book on Arthurian legends, Ray is being crowned King by someone I assume to be Guinevere.

Now, as more of a side-note, the Merlin fan in me really wished Katie McGrath (who played Morgana Pendragon in the series) would take some time from being the amazing Lena Luthor in Supergirl to cameo in the episode just for the sake of fanservice. I mean, she is already going to be in the next King Arthur movie, The Legend of The Sword, so this would be the third jewel she could add to her Arthurian crown and it wouldn’t even be a paradox given Lena is literally in another Earth of the multiverse.

In this article:DCTV, legends of tomorrow, camelot 3000