Holy S*** I saw Hamilton... or, Political Art Can Sometimes Be Political I must have a really good sense of timing or a terrible, no good one. Jury’s still out here. Either way, I was fortunate enough to have a friend with really, really good timing. Enough to get us tickets to Hamilton in Chicago, which I went to see just a few days ago.

Apparently, so did Vice President Elect Mike Pence. And as it always does in the theatre, drama ensued, in the form of a carefully worded letter and a few tweets.

But more on that later. While I understand that we try to avoid being too political on The Fandomentals, I’m going to have to apologize here, considering that…well, Hamilton is the subject matter.

I’ll start with a bit of gushing though, and describe the best two hours of my weekend.

I want to be really honest with you all- I’m a bit of a fraud. The truth is, up until the actual showing, I had not listened past a certain part of the show, so essentially the second act was almost entirely new to me. It was by choice though- I wanted to feel what a new audience member felt with the non-spoiled part of the show.

Overall, I think it was a fantastic idea. Learning the in-depth history of Hamilton’s later years was a roller coaster in the best way. Lin Manuel Miranda did a fantastic job of illustrating the mania of Hamilton and Burr’s rivalry, along with some of the worst parts of his life.

Not only did I cry with the parts of the show that I already knew (“My Shot” and “Wait For It” especially) but I got to discover with the audience, which is a fantastic feeling with such a popular show. Performance wise, the entire cast operates as a tour de force. I’m sure that I’m being biased, but as a performer myself I have no real critiques (besides them not being the original cast…but now I’m just being picky).

Recollecting some other critiques of the show’s handle on Lin’s inclusion of women in Hamilton’s plotline, I found the Schuyler sisters to be quite the driving force, along with Maria Reynolds. Although sometimes they could be seen as very plot-device like, the women in this show shape Hamilton in a very profound way. Plus, Angelica and Eliza gain more and more depth as the show goes on, which I’m very happy about. 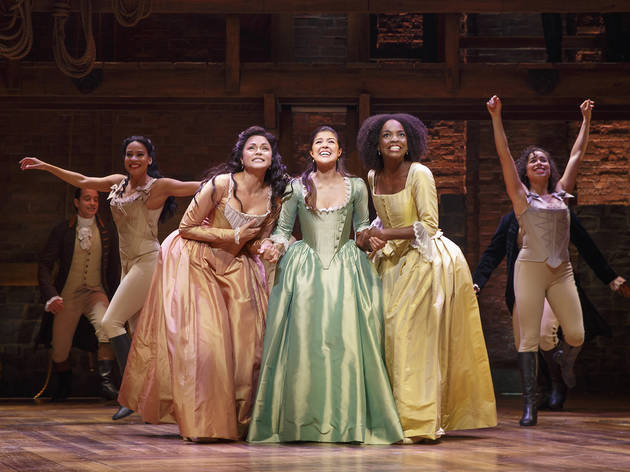 Now, back to some (recent) political happenings. I’m sure most of you readers know what happened. It was surely plastered all over my social media, considering that my visit to Chicago was for that very purpose. Did I mention my good timing before?

Anyway, I really have to address one of the biggest responses I heard from people who opposed what the cast did onstage that night. It seems that many people believe that artists have no right to address politics in such a way, or in any way. That all we can and should do is act, dance and sing while the world goes on around us.

You’d be right to assume those comments struck a chord with me.

It was just astounding to me to see how many people thought that theatre and people in the arts in general were not relevant to a political conversation. So if anyone is confused, I’d like to clarify for you: arts of all kinds, and media, are inherently political. Just ask Shakespeare, or read…any of his works, particularly the tragedies. They may not always appear so on the surface, but painters, musicians, and actors alike have all engaged in politics and beliefs- especially those they do not agree with.

In addressing those words to Pence, that is exactly what the Hamilton cast so eloquently did. They engaged in a way that artists do. Most works that are done or constructed are in order to challenge the mind, and I think that as artists, we cannot help but do so.

Hamilton is inspiring, insightful, and a fantastic way to learn about your historical figures on every side. With Eliza at the helm and Burr as the narration, this production does not steer you wrong. Having POC playing lead roles in that capacity launched the show into a different realm of popularity, impacting people who don’t even look at musicals. And this weekend, history surely had its eyes on the cast, for better or for worse.

If anyone has questions about the show, comment below. I’d be happy to answer!

In this article:Hamilton, musicals, politics Skilled cosplayers are one of the essential parts of fandom. The spirits of fictional characters become real in a good cosplayer’s capable blend of...

Exposing the Politics in Art

“The opinion that art should have nothing to do with politics is itself a political attitude.” – George Orwell As some of you may...