Being Black and Watching "Get Out" “What would happen if black people starred in horror films?”

That question has been parodied and pondered for quite a while. Luckily for us, Jordan Peele decided to offer up his own answer, in the form of Get Out. In some cases, it has already happened…but a film of this caliber has not.

First, let me preface this by saying that this is how I watched the film:

While it’s true that I invited the people I sat next to, the color scheme essentially matched this picture. Two black friends of mine also came…but we had to “reserve” separate seats. Altogether that made for quite an interesting experience.

Ever since the film’s trailer was released, Get Out has been on my mind. And I was so excited to see it last week that I even got a whole group to come with me. I am not necessarily a fan of horror films—frankly a lot of clichéd formulas only convinced me to see a minimal amount of the newer films to avoid becoming bored by the ending. But Get Out is something different. It’s realistic horror, based on the Night Doctors and Sundown Towns of old Black America. Peele also brought up some practices back to life that sent a chill up my spine: hypnosis, human auction, etc. I’ll try not to spoil too much but there are some parts where I just cannot resist.

As someone who has often been the token, only, or first black woman (or person)  in many of my ventures, I found that Peele’s direction spoke to most of my entire existence. Of course, my results were nowhere near as terrifying.

Although Chris (our protagonist, played by Daniel Kaluuya) was thrust into the lion’s den, it was the audience that got to experience the discomfort that just led to unrest- especially me. Peele covered multiple layers of a fear that many black and brown people face in America. I felt the paranoia that people are watching you for all of the wrong reasons.

I pinpointed the puns and micro-aggressions, tacked onto backhanded compliments. The fetishized comments just freaked me out entirely. Conversations that began with “I would’ve voted for Obama for a 3rd term” were sprinkled into the film, and are reflected from real life. It is a feeling that is entirely personal, but profound each time. Peele disguised it cleverly too—in a world where political correctness is scoffed at, that whole “is it just me” paranoia often featured in horror is even more insidious here because it was actually happening but shoved to the side by the majority. Chris was intentionally outnumbered and outmatched. The ultimate grossness of racial relations gone awry slowly escalated the further Chris went away from the city. 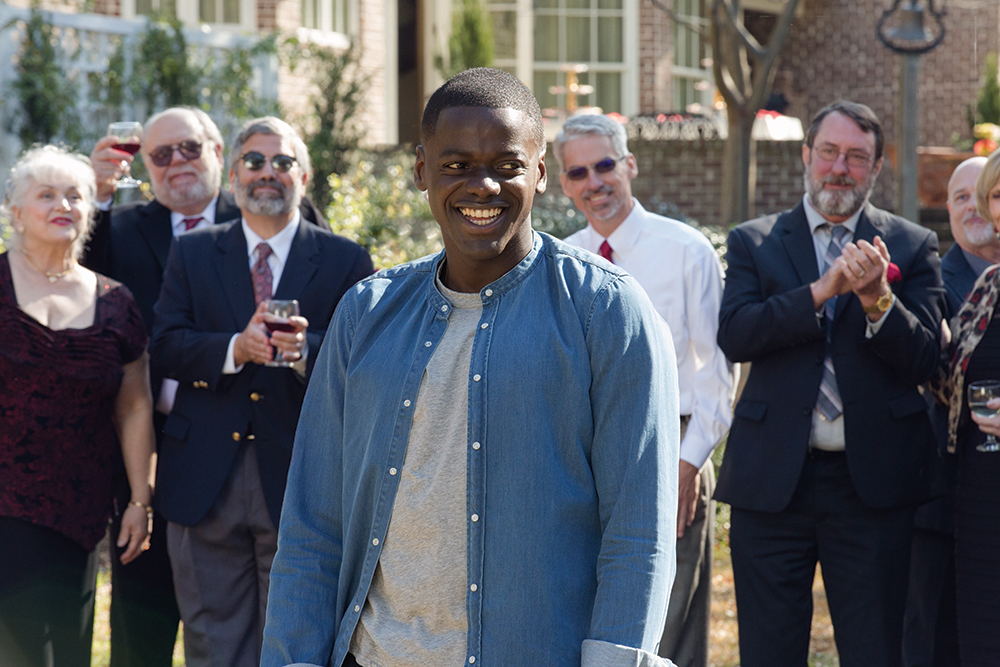 Get Out was made even better by the Armitage’s ally-ship with Chris. Surprise…it’s fake. But Peele gave us a very nice bait and switch in the form of Rose (played by Allison Williams). While I never expected the Armitage parents to be totally versed in current social platitudes, it was Rose who I had the most hope for and ultimately betrayed me (and everyone else, according to some very vocal audience members). This is unfortunately a very true reality for many disadvantaged peoples- realizing that your friend or partner may not truly ride or die for you. One misplaced word, one odd gesture- and all of a sudden that partner is a stranger. In this case, it was all on purpose, but Rose pointing out the cop’s behavior after the wreck or calling out her family’s passive aggressive attitude made her a prime wolf in sheep’s clothing.

And while Chris went down the rabbit hole, his friend Rod offered a fantastic antithesis. He was the embodiment of the memes that joke about black people being realistic in a horror setting, and the tension release that was much needed.

But then he was also the embodiment of brotherhood, and ultimately Chris’ savior from a revolting fate.

While we’re here, I have to say how much I loved the third act. It subverted a lot of the classic archetypes you see in many a horror film.  Once you see it, you’ll understand what I mean. I think it’s very much Peele’s version of “cut the bullshit” and kill the stereotype, in more ways than one. Instead of suspense, there was racial tension. Slow kills in other films became three kills in three minutes in Get Out, and at least some of the black men live. I could not have been happier to see Rod in that (oddly apprehended) police car, coming to save Chris.

Because what kind of terrible irony would it have been to have a real cop step out of that car and pin that bloodbath on Chris? Well, I guess our reality…

In the end, the scars are deep for our protagonist, but (mostly) psychological. He may still have a particular trigger for the rest of his life too. If that isn’t a euphemism for the psychological terrors that marginalized people endure on a daily basis, I don’t know what is.

As far as horror goes, I think Peele has given us a “social horror” that is similar to Black Mirror on some levels. Apparently, there may be even more to come. If I had to describe my experience of it quickly, I would say Get Out was a display of the most extreme form of cultural appropriation/marginalization, so prepare for some discourse afterwards. The performances by the entire cast and ensemble were fantastic, so if you like horror in general I would definitely advise seeing this movie. Maybe with some of your more woke friends, so you can enjoy the memes later.

In this article:social commentary, horror, jordan peele, Get Out

‘Nope’ Thrills and Delights at Every Turn

I loved Nope. It is a movie concerned with spectacle, but not in the way modern movie audiences are familiar. Jordan Peele is less concerned...