This week on The Flash, the team races to the rescue of Harrison Wells after Jesse Wells’s warning that he has been held at Gorilla City by the long time villain Grodd.

We start off with Earth-2’s Gorilla City: a place in Africa where highly evolved gorillas rule. I have to say, the CW went all out to create nice looking scenery filled with gorilla-shaped mountains and a cool gladiator arena. However, this CGI must have cost a lot because it clearly prompted the writers/director to compromise quality on other scenes.

After seeing Grodd chasing down Harrison Wells, we cut to Jesse explaining the situation to the team. The gorillas had sent a coded message to Harrison inviting him to Gorilla City. He he went with an expedition that ended in several of the travelers found beaten to death, but no sign of Wells himself. Team Flash starts worrying about one of the newscast’s headlines from the future regarding a gorilla attack on Central City. They think that maybe Flash can stop Grodd on Earth-2 and change the future, which might be beneficial to the ‘Iris Situation’. As Barry, Cisco, and Caitlin are getting ready to leave, Julian arrives sporting an Indiana Jones cosplay so good that people from two different Earths with two different cultures (remember that Beyoncé is a senator on Earth-2) comment on it. He says he wants to travel the multiverse, but it’s pretty obvious the Brit has feelings for Caitlin and wants to protect her.

Cisco creates a breach that leads the group to the aesthetically pleasing Gorilla City. The plan is to save Harrison from Grodd so he can’t open the breach and lead the gorillas to Central City, but that’s kind of moot point given the CW likes to send out the press releases in advance. The title of the next episode already spoils that this won’t work given that the Grodd arc for this season is a two-parter. Unfortunately, Team Flash gets shot with sleep-inducing darts by our non-friendly apes.

They wake up in a holding cell inside the city. Barry tries phasing out, but is unsuccessful. Same with Cisco, who can’t breach them out – Grodd is dampening their powers. They hear someone coming and it’s Harrison Wells, but he’s being mind controlled by Grodd, who is using Harry as his spokesperson. A side note: besides being a cop out for budget reasons, Grodd!Harrison is at least the fifth persona that Tom Cavanagh does on this show. It’s the third in this episode alone, which is a huge credit to his acting prowess.

Through Wells, Grodd tells the group that he is actually in need of their help to take over the gorilla leader Solovar who wants to rule humans and invade other Earths, putting Central City in danger. Grodd himself can’t beat Solovar, so he expects Flash to kill him so or all of them will die. It’s kill or be killed in Gorilla law. Also, this is going to happen on an Arena gladiator style.

A little later, we finally meet Solovar, a tall white gorilla who “bitch slaps” Grodd for failing to inform him about the humans. He is physically imposing and, to be honest, it doesn’t hurt that he is being voiced by Keith David, which only makes the next couple of scenes hurt. You see, I’m pretty sure that because of the gladiator fight’s budget, they had to cut down on other scenes. Therefore, Keith David gets sadly underused, as Solovar starts speaking through Cisco despite being RIGHT FUCKING THERE. A nitpick, I know, but it’s the same story as when Supergirl had to be sidelined by Oliver Queen during the Invasion crossover. Barry negotiates with Solovar so that the fight will be only between the speedster and the ape leader, and if Barry wins, Solovar will let everyone go. The fight begins; there’s some weird CGI here and there, but it still looks pretty good (on my scale of good-bad TV visual FX, my lowest is Once Upon a Time, so I’m pretty forgiving). Cisco coaches Barry through his mic, I think, and he makes an initial move that gets brutally reversed by Solovar, drawing blood from the Flash.

Caitlin suggests that he try throwing lighting at Solovar, so Barry starts speeding around the arena to gather energy. However, Solovar makes a high jump and lands throwing a cloud of sand everywhere which causes Barry to stumble and fall. Just as Solovar is jumping again to bash Barry into oblivion, Cisco tells him to use a Reverse Flash move and vibrate his hand to attack the gorilla. The attack works and Solovar is down, but Barry refuses to kill him. This pisses off Grodd, who tells some underlying ape to dart him again.

Barry wakes up back in his cell and Grodd starts speaking through Wells again. They realize that they won’t be let out because Grodd is now the leader of Gorilla City. This was all a ruse to allow the new leader to invade Central City (with the use of Cisco’s breaching powers) and take revenge and control of the place where he was created and controlled.

As Wells comes back from his catatonic state, Cisco spitballs that if he died, their problems would be solved. Julian says that while this would prevent one of the headlines from coming true, it would ensure another one as it would be up to Caitlin to kill Cisco, thus becoming Killer Frost. Barry ominously says that, while that idea won’t be used, one of them will actually die. Grodd walks up to their cells to find a pretend-dead Barry after Caitlin freezes him – we’ve seen this before in 3×07, “Killer Frost”. The gorilla opens the cage, feels Barry’s coldness, and conveniently drags him out. Barry starts vibrating and, soon enough, he’s back to his humanly warm self. Barry frees his friends and races them through Gorilla City to the woods just in time for Cisco to open a breach back before Grodd foils their plans. Everything seems alright… or is it?

Spoilers ahead from the end tag for the sake of recap continuity:[reveal heading=”%image% Click here to show/hide contents”] No, it is not. Grodd is shown to have either controlled, or persuaded Gypsy into opening breaches for him. So, yes, the “Attack on Central City”, next episode’s title, will indeed happen.[/reveal]

The other arc from this episode surrounded Wally’s (who is letting his hair grow to be a more comic accurate Kid Flash) and Jesse’s will-they-won’t-they love. I have to be honest, it felt contrived to me because these two liked each other already, but then Jesse went back to Earth-2. Now that she came back to ask for help, she is sort of taken aback by Wally’s powers and came up with the idea that Wally was more attracted to her speed than to her.

Wally ends up asking Jesse to stay in Central City with him, and she’s undecided because she doesn’t know whether to follow her feelings or her dad. HR gives her a nice speech about young love and taking a shot from the heart, which apparently gets to her. After she reunites with her father, Wally kisses Jesse and it seems mostly decided that she wants to stay in Earth-1.

Personally, I’m not a huge fan of Grodd as a villain. I feel like, as much as this is the DCTV and there are metahumans and aliens, a sentient powerful Gorilla is too out there even for this reality. It just doesn’t translate well from page to screen despite the writer’s best efforts. Still, I actually really liked this episode for the plot. It continues the trend of a resentful Grodd, and his reasons sound plausible. Maybe The Flash beat Solovar too easily (he’s no One Punch Man fighting this heavy as fuck gorilla, but okay), and I would have preferred they used the actual animals to speak for themselves all the time instead of copping out with mind control, but those are small complaints. 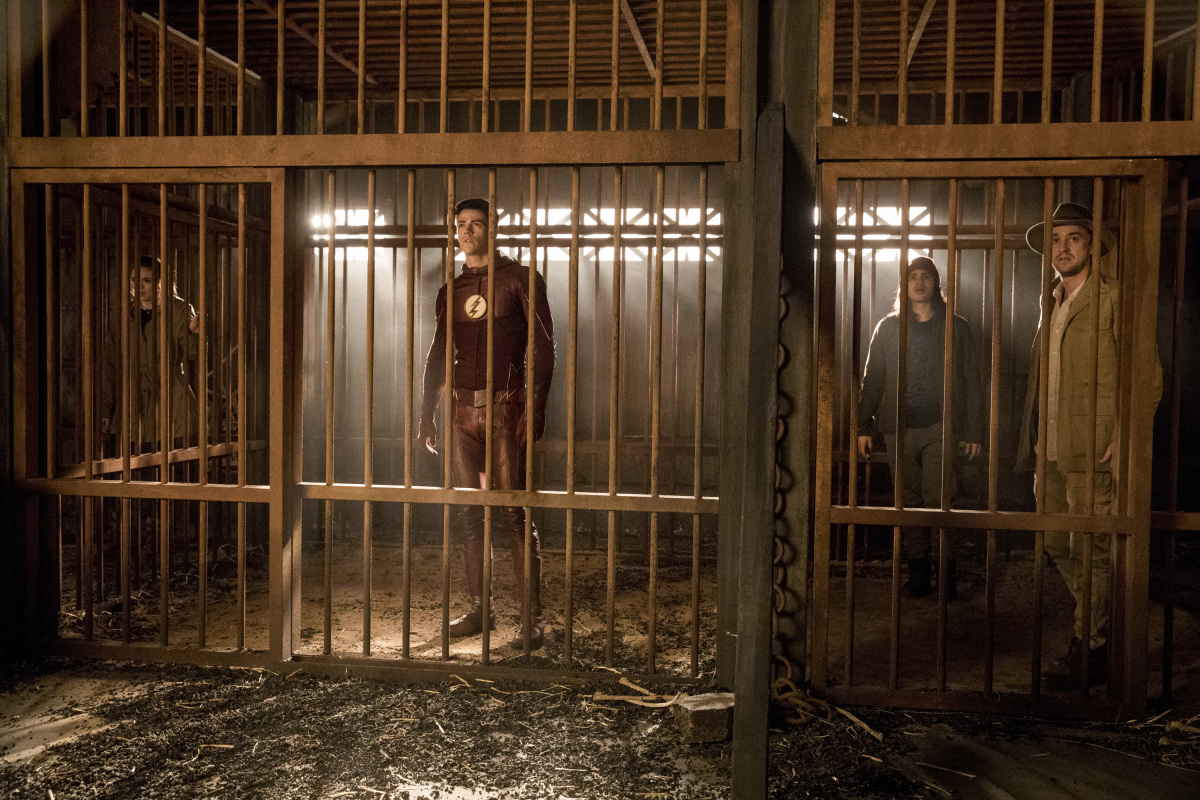 On a related note, I’ve read that the DCTV are trying to beat superhero movies in terms of concepts and it’s pretty hilarious. We had Arrow introduce the Suicide Squad to the screen (before killing them off), a knockout version of the Gotham City Sirens this week and, apparently, The Flash beat Thor Ragnarok on gladiator matches with superheroes. How…nice?

Anyway, next week we delve into the second part of this arc as the Gorillas come to Central City to wreak havoc. Honestly, I hope they find a way to get rid of Grodd perpetually because this is the fourth episode he’s going to be featured. I’m not being intentionally negative towards it, but I don’t think there are many more ways to have him do his thing, and be defeated in a creative and unique way only to come back later.

In this article:DCTV, gorilla grodd, The Flash