After an arduous hiatus, our dearly beloved DCTV started its rollout of new episodes yesterday with Supergirl. Now, The Flash is back in action as Barry tries to cope with the vision of the future he got when he “got rid” of Savitar in the last episode: Iris West’s death.

We start off with Barry reliving the scene in a nightmare, which Iris says has been happening for three days now. His screaming concerns her. As worried as our journalist is, the speedster refuses to tell her what’s wrong because of Jay’s warning that nothing good could come out of it. Barry is then called on to put out a fire and he promptly succeeds, taking this opportunity to teach a thing or two to Kid Flash. 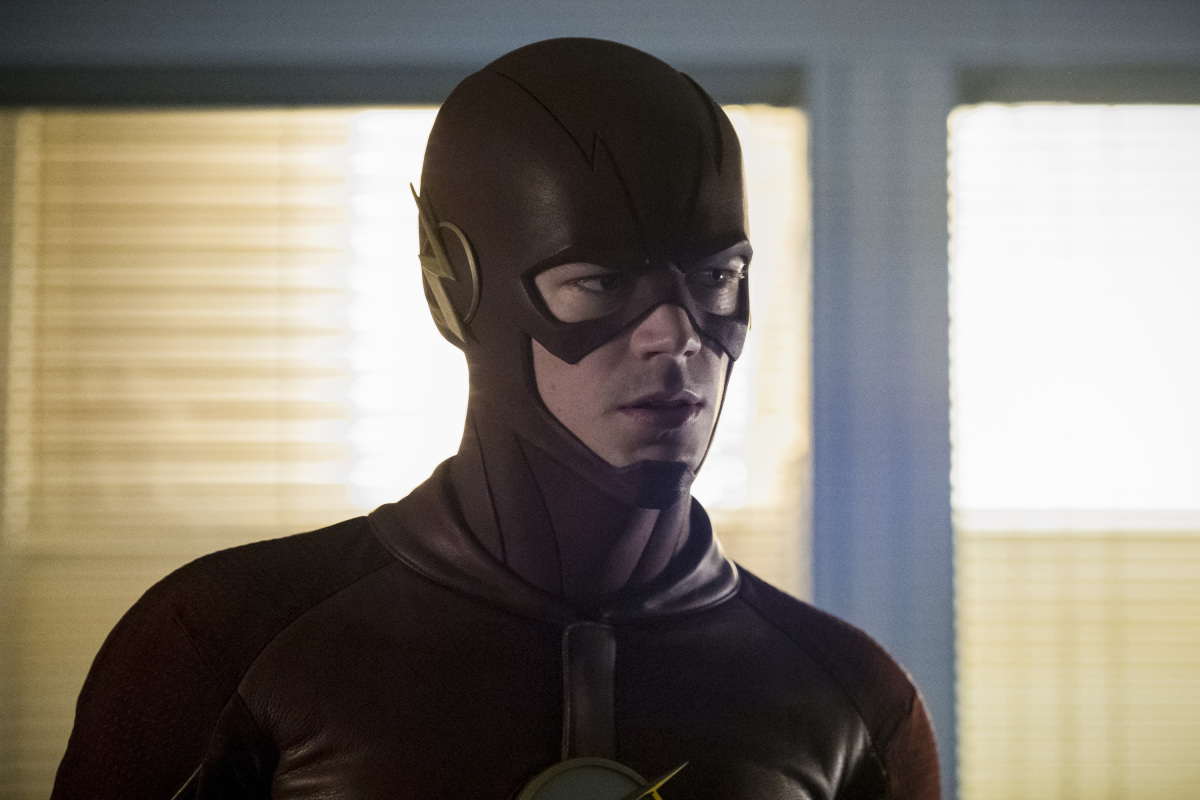 Back at Star Labs, Caitlin Snow is having trouble with the bracelets that keep her grounded in her non-Killer Frost “persona”. HR Wells is putting the final touches on the opening of the STAR LABS museum he mentioned sometime ago and no one is really excited about it, understandably – there’s a hologram of Cisco that has imperfect speech pattern and screams “science”. Wally goes to visit his dad at the police station and eavesdrops on the guy they saved on the fire arguing that Kid Flash was useless and that maybe Central City doesn’t need another speedster.

Caitlin goes to check on Julian with the ulterior motive of asking him to help find a better way to keep her powers at bay and even join Team Flash. He lies, claiming not to feel guilty about the people that were hurt during his time as Alchemy, even under Savitar’s control, and denies the offer. As she is leaving his office, the bracelets start failing and she almost lets Killer Frost out before plugging them into some sort of portable power cell.

At the West-Allen loft, Barry has unpacked their belonging after apparently taking an online course in house decoration. It looks very, very pretty and aesthetically pleasing. Iris starts asking him again about his nightmares (she sees through your sudden artistic prowess as a decoy for the larger issue, Barry), but is cut short because of robbery at a jewelry store. Naturally, The Flash intercepts the guy, but he is taken aback when he remembers the same thief was in his vision of the future on a newscast report. Plus, the dude kind of hits Barry with some kind of wave weapon and knocks him down in order to escape.

This begins what I want to call “Barry Is A Dick To Wally”. Instead of dealing with his own Issues™ about his vision of the future, he undermines our golden young adult and his proven abilities as a speedster. It makes no sense and feels very contrived. No one buys it, thankfully. It seemed like the writers spun the “Who’s Gonna Be Overprotective of Wally” wheel and it landed on Barry this time. 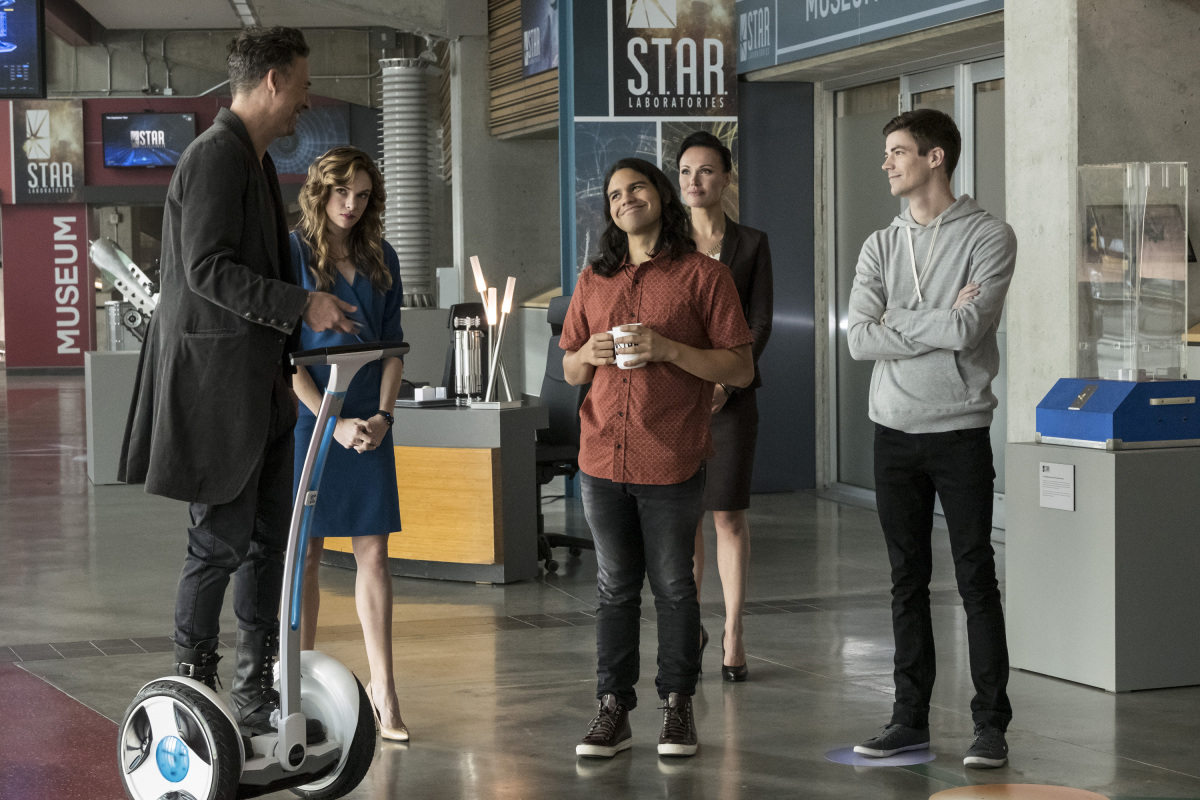 HR’s big opening comes, the gang is all dressed up nicely, but alas no one comes – well, two people come, but they thought it was free, so they leave. Oh, and Julian, but comes just to say yes to Caitlin’s proposal, which she failed to mention to the rest of the group.

Now alone, Caitlin gives Team Flash a very well written speech that perfectly summarizes what they needed to hear because she needs their help. This lead to a break in the clichés as Barry FINALLY decides to tell Iris about his vision. I can’t tell you guys how thankful I am for this. I mean, I can’t exactly remember other instances of this particularly (even though “not telling someone something to protect them” is worn out as fuck), but I am still happy that he opened up early on and boy, does Candice Patton sell it. Acted her face off and got me emotional.

The pair then opens up to the rest of the gang – minus Joe, who I guess will be the “needs to be protected” victim – about the future and how to stop it. They realize they need to figure out the events that lead to that grimdark future. This leads to Cisco vibing Barry and himself into his vision.

Once there, he sees a bunch of perfectly put headlines which will be plot points in future episodes: Killer Frost is on the loose (GOD NO!!), Joe is honored in some event, Grodd will be back (yikes), the Music Meister will sign a contract (yikes #2 because he will be the villain of the Flash/Supergirl musical crossover and will be played by my non-fave Darren Criss), and some other stuff. Also important: HR is present on a roof with a gun and that was a change to the future, so Team Flash gets optimistic because their mission of avoiding Iris’s death seems possible.

Side note: I really hope they succeed in this mission. Not only because I love the character of Iris West, but also because killing the female lead to cause manpain is terrible storytelling. Plus, she is a woman of color and Sleepy Hollow already did that, to gross effect.

Barry and Iris throw a cute house-warming party and formally accept Julian onto Team Flash. Yay for cute moments like the one where HR gives Barry a pet turtle, and he geeks out. The end tag shows Gypsy coming out of a breach with a hologram showing HR’s face, which will be further developed the next episode.

Overall, I enjoyed “Borrowing Problems From The Future”. It was a nice follow up to the midseason finale, and it delivered quite well. I could have done well without the stupid contrivance of Barry deciding to be mean to Wally and Cisco doing the same to HR even if both pairs end up on good footing. As mentioned, Candice Patton’s emotional scene was my high point not only because of the acting, but because it avoided a major cliché I hate. I hope The Flash continues to avoid these mistakes and subvert expectations!