We pick up right where we left the Doctor and Bill last week: they are in the TARDIS, discussing the mechanics of time travel. Bill is asking all the important questions (”How much did it cost?”), but before they can get to the fun part, the journey itself, Nardole shows up to lecture the Doctor. The mysterious vault storyline continues, but the Doctor was never one for total responsibility so he takes Bill for a ride anyway while Nardole puts the kettle on. He seems to have a problem with the Doctor taking Bill under his wings, I wonder how the Bill and Nardole dynamic will develop during this series. We’ll have to wait for that, as this week it’s just the Doctor and Bill, going to the future. Normally I do prefer it when a companion’s first trip is into the past, but Bill’s reasoning of “I want to see if it’s happy” is fair enough. Before they get to Gliese 581 D, a human colony in the far future, we see how the “Emojibots” murder two human colonists (and plenty more offscreen) for not smiling. One of them is Goodthing, aka Gita Chandra from The Sarah Jane Adventures. Doctor Who and its spin-offs, reusing actors since 1963.

The Twelfth Doctor and Bill land on Gliese 581 D thinking that all is well, as the Doctor enjoys showing off the Bill way too much, but she keeps asking the right questions and calls him out on the vault thing. It seems that he’s supposed to stay on Earth because of it, but he has a point, when you have a time machine you can cheat a little. It doesn’t take them too long to encounter one of the Emojibots and get their very own mood badges. These track their moods and use emojis to communicate with them, although the person never sees their own mood badge. As the Emojibot serves them food in the form of blue jelly, the Doctor begins to theorize that the colony is so empty because the humans themselves haven’t arrived yet. In the meanwhile, Bill is having none of “food sexism” and “bloke utopia” and doesn’t let the Doctor’s “two heartbeats” remark pass her by. She’s the kind of companion who, rather than following the Doctor’s convoluted theories, just focuses on what really matters, and I love her for it.

When they go to the garden, the Doctor finally realizes that actually, there were humans there but the Emojibots killed them. Because the suspense leading up to this revelation wasn’t a particularly strong one, I would have preferred to find out about this along with the characters, but the result is the same. They escape the Emojibots by smiling, having realized that they get angry when the mood badges signal that people are not being happy. After the narrow escape, the Doctor runs right back, and Bill once again asks the obvious yet not often mentioned question of why he’s the one that has to deal with the situation. She observes the TARDIS, realizes that it is a police box after all, and runs after the Doctor. She starts viewing him as the hero who helps out because he can and because no one else will, while the Doctor keeps insisting that he doesn’t just  “fly around helping people out”, even though that might as well be the subtitle of the show.

Twelve keeps looking at the problem from the wrong angle and so when they find the original ship that brought the robots and the humans to the colony, he wants to find the engine and blow it up. The Doctor and Bill have some more quality time and discussion, and just before he could blow it all up, Bill finds a little boy and the Doctor puts two and two together: what’s left of the human race is there on the ship, so he can’t solve the Emojibot issue by blowing it to pieces. When the other humans wake up they plan on going up against the Emojibots that killed their loved ones, but the Doctor and Bill find out why the robots started acting like this. After one of the humans responsible for setting up the colony died, people were grief-stricken, and as the Emojibots were programmed to ensure human happiness, they viewed grief as a danger and eliminated it. The Doctor resets the Emojibots so they don’t remember that and can negotiate with the humans, a new cooperation. Once that’s done, the Doctor is ready to take Bill back to Bristol, just in time for the water to have boiled, but being the Doctor he messes up and they land in London… in 1814… on the Thames, in front of an elephant. Oh, good old Doctor Who cliffhangers.

“Smile” handled the Emojibots better than I expected, but overall I preferred the first episode of series 10. It was an enjoyable episode, but its greatest strength was definitely the Doctor and Bill relationship and how it was developed as companion relationship after having been a mentor-student one. The dialogue was great, Bill’s character was just as delightful as in her debut episode. She’s asking the questions that should be obvious and yet the Doctor isn’t expecting them, she’s challenging him in a refreshing way. It must be hard to come up with new and interesting character dynamics after 50+ years, but I’m convinced that Bill has a personality that we haven’t seen before and she brings something new to the TARDIS. She’s relatable like the RTD era companions were, sometimes just a tad bit too much (the selfie was over the top for me), but overall a great character. I feel like she’s exactly what Doctor Who needs right now. She’s clearly looking up to the Doctor, first he’s been her tutor and now she’s travelling with him and seeing him as a hero. But we know that the Doctor is far from being perfect, so I’m looking forward to Bill’s view of him changing as she gets to know him better. It looks like she’s going to realize he does have a darker side in the next episode (”Have you ever killed anyone?”) and from what we’ve seen so far, she’s not going to take that lightly. She wanted to see if the future was happy and what she found was that humanity all but wiped itself out, the first sign that travelling through space and time is not as happy as it sounds. 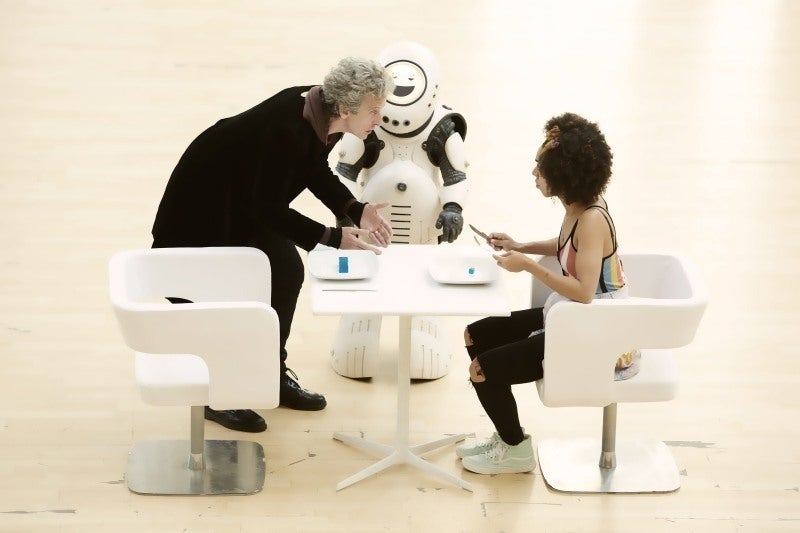 As for the Doctor himself, he almost messed up spectacularly this week. At first, he was all too happy to travel in the TARDIS again, to show off to someone, but then his first solution to a problem was to blow it all up. His final solution of basically “switching it off and on again” and forcing the humans to negotiate with the Emojibots was questionable, although I mostly put that down to the episode having a lazy solution, not to the Doctor’s character. Regardless, he was acting just as recklessly as he could in his Clara days, which would be an interesting concept to explore. The whole of series 9 was based on the concept that together Twelve and Clara are too dangerous, but because he forgot her (not everything, but most things) there is the question of whether he learned from it at all. Bill is a very different person to Clara so she would be a good person to slow him down when he’s being carried away, and even Nardole seems like someone who can call him out, mostly when it comes to the vault stuff.

About the vault, it’s obvious that we’re not going to find out the whole truth until the series finale, but at this point my main question is not necessarily what’s in the vault, but why does it need the Doctor to stay on Earth and how long has he been guarding it.

The plot itself was average, one of those typical Doctor Who sci-fi ones that are based on a good concept but are not anything sensational. It was a bit darker than I expected, but then again the whole of the 12th Doctor era was advertised as Darker and Edgier™. It was both better than I expected based on the promo material and a bit of a disappointment, mainly because of the ending. It doesn’t make much sense and there could have been more to this story than a reset button, but that’s the downside of one-parters as opposed to 2015′s two-parters. There were themes of grief and sadness being just as important to human being as happiness and once again we established that robots mean well but lack human understanding. Given how the episode was built around these it could have been explored more, maybe in relation to Bill’s personal life or the Doctor himself. He might not remember Clara, but he knows a thing or two about the power of grief. The very end with a teasing of the next story was well-handled though, it leaves this one on a cliffhanger, leads into the next episode and gives a reason for the Doctor and Bill to keep on having adventure, despite the Doctor not being supposed to leave Earth. I wonder how long that will go on and whether it will become a running gag for this season, the Doctor never being able to land in Bristol at the right time. Then again, that would leave Nardole out of all the fun, and as much as I’m still on the fence about him I want to give him a chance to prove himself.

Series 10 continues to deliver, even if “Smile” wasn’t anything spectacular, it was still enjoyable and free of any major issues. The building of Bill’s character and her relationship with the Doctor continues to be promising and personally, I can look over a mediocre story if the character development is there. Next time it’s “Thin Ice” and time to go back to good old Victorian London, where we’ll hopefully see more of the Doctor and Bill bonding.