I’m going to admit something to you guys before I begin: it took a bit of time to get back into the swing of reading a series, especially A Series of Unfortunate Events (ASOUE). My anticipation arose mostly because of the fact that they’re blatantly for a younger audience, and I hoped the books would still be good.

I was not let down. At least in certain aspects. The unfortunate adventures of the Baudelaire children are still wonderfully entertaining a full decade later, and definitely sillier.

So let’s dive in to The Bad Beginning, where everything goes downhill from the peaceful scene that introduces the Baudelaires on Briny Beach. We have Violet, the inventor, Klaus the bookworm, and Sunny, the…baby. And of course, the mysterious figure approaching them, Mr. Poe. He is the deliverer of bad news (and possibly the flu) and possesses as weak a mind as he does an immune system. But he is their banker, and possesses the last testament of their parents, so he’s…kind of important. The Baudelaires’ world is shaken after hearing about their parents’ deaths, leaving them orphaned. And, through what was probably an outdated or forged will, they land into the hands of

Let’s cut to the chase: Count Olaf is fucking evil.

That’s something that everyone knew, or could guess. But just how evil? I’d forgotten. It’s the multi-layered, obsessive, and consistently offensive with little to no effort type of evil that we receive here. I distinctly remembered his homicidal streak, don’t get me wrong. But my eyebrows were continuously raised at his other…nuances. Just to summarize The Bad Beginnng‘s atrocities, he dangles Sunny from a tower, attempts to trick people into being witnesses to marrying Violet (who is 14 at the time), strikes Klaus for talking back, and generally neglects the children while making them do endless chores. Each child is put through individual psychological torture through this man, and this happens in the course of a few weeks. Goddamn.

Also, I hate that he is an actor. Way to give the rest of us a terrible name, guy. If anything, Olaf makes the entire Series of Unfortunate Events possible, and takes us (and the Baudelaires) for a horrific ride. And the horror builds as nobody believes that he mistreats the Baudelaires so heavily.

Even Justice Strauss, with her undeniably positive and understanding attitude toward the Baudelaires, fails to see far into the children’s intellect and eventually, their grim discoveries. At one point in trying to figure out Count Olaf’s plan, the doubt even influences the children, making them think that they are insane and actually just not accepting the reality or Count Olaf’s “generosity” by taking them in. As a result, she ends up being an unknowing accomplice to Olaf’s gross plan. 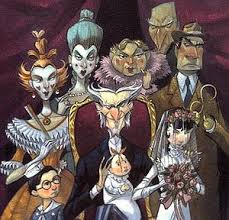 In the end, he and his troupe doesn’t get away with it, obviously, but we do get a solid glimpse of how gross our villain can be.

Something present in The Bad Beginning were the implications from Olaf about his use of violence and sexual assault to get his way. I read these novels before I really knew what sexual assault was, and the many forms it can take. The chill up my spine from The Count claiming that Violet was “his” may have been present a decade ago, but now it’s intensified. And now I realize (and fear) what may have happened had Violet not outsmarted literally everyone in the show that night. And of course, Mr. Snicket does not advocate any of this behaviour- he draws his line in the sand on his moral standing from start to finish. This carries over into The Reptile Room in one scene where Olaf, under disguise as Stephano, carries a knife that goes unnoticed by Uncle Monty, but definitely noticed by Violet as he rubs the knife against her knee during a “family dinner”. I know that this is can be interpreted, but I definitely received a feeling other than just fear.

There is also a good amount of verbal sexism towards Violet, both from Mr. Poe and Olaf. Considering that Olaf was willing to marry her, he sees her as wife material (ew ew ew) and the Baudelaire fortune, nothing more. Both him and Mr. Poe diminish her inventive abilities- even when it is the only thing saving the children’s lives- because it isn’t proper for a girl to be doing the things she does. Never mind that they’d probably be dead if she didn’t.

When someone like Count Olaf is in your life, it’s impossible to live without fear. He’s the epitome of the Baudelaires’ fear, and not much (at this point) can be more of a threat to the Baudelaires. He invoked a lifelong trauma that we have to follow. By the time we reach The Reptile Room and Dr. Montgomery Montgomery’s fascinating herpetologist discoveries, we can see more of the children’s paranoia and ultimately, their trauma from being in the care of Olaf. Their trust for adults becomes harder to earn, although their “uncle” Monty is very accommodating in comparison to the hell that was Count Olaf’s guardianship. While they miss their parents (and accept the fact that they always will) they try to comfort themselves under Dr. Montgomery’s care. And it works, for a while. Until Olaf’s inevitable arrival as Stephano, which leads to Uncle Monty’s untimely death.

Snicket is a bit tongue in cheek in The Reptile Room. especially with the creation of Montgomery Montgomery and how much he loathed the constant belittlement from his fellow herpetologists. He’s speaking about the repetitive nature of his name, just as Mr. Snicket has the repetitive nature in his writing. Snicket almost sabotages himself in this way as well, by outwardly telling his audience that Uncle Monty dies. A lot. While I get that this is his style (he foretells the other guardians’ fates as well), for some this would be a total turn off. Of course I was already well aware of the ending, but it does put a damper on the rest of the tale. Which is probably Snicket’s point…damn, maybe I should stop reading.

Although, I doubt that this series would have any clout if the guardians were kept alive. What kept me reading is the fact that the true genius is the Baudelaires unraveling the mystery of his death. Through reverse psychology and a good amount of crazy anecdotes and examples, Snicket makes The Reptile Room interesting enough to get through.

And although Sunny was kept in a tower for a good amount of her time in Count Olaf’s hovel, I feel that we have to credit her for her crazy baby feats. So much so that I’ve decided to add a section called the Incredible Sunny Moment, where an actual baby gets it all the way together, often sometimes faster than her older siblings and the adults surrounding them. Losing parents really forces one to grow up, and Sunny does a Hail Mary at least once per book to save the children from Count Olaf.

The Incredible Sunny Moment for The Reptile Room goes to: Distracting the Adults with the Incredibly Deadly Viper

For The Wide Window, we are taken to Aunt Josephine’s home which overlooks Lake Lachrymose. For reference, here’s what it looks like:

The irony here, is that Aunt Josephine is afraid of just about everything. Stoves, phones, visitors, realtors, etc. And yet her house is basically hanging on by a thread, with only a leech-filled lake to break its fall. Nice. And so it goes for most of this novel, as Josephine, stricken by fear and left alone in the world after her husband is eaten by leeches, restricts the Baudelaires while giving them endless grammar lessons.

But Aunt Josephine teaches something important through her paranoia. When someone like Count Olaf is in your life, it’s impossible to live without fear. He’s the epitome of the Baudelaires’ fear, and not much else can be more of a threat to the Baudelaires. He invoked a lifelong trauma that we have to follow. But they quickly learn that being anything like Josephine would be a nightmare for both them and the rest of their lives.

Count Olaf reappears as Captain Julio Sham, which is just as cringe-worthy a fake name as Stephano (seriously, what’s with the Latin names???). He cuts right to the chase and threatens Aunt Josephine after flirting with her, and since she is reasonably terrified, she fakes her own death. It happens right in the middle of the novel, but gives us an interesting twist in exchange for a familiar ending.

As much as the Baudelaires try to enjoy the generosity that Josephine expresses by taking care of them, it is bittersweet- she is no Uncle Monty, but DEFINITELY never a Count Olaf. I do have to agree with the children that Josephine, in comparison to (potentially) Justice Strauss and Uncle Monty, was their worst besides Olaf, so far. She did not hesitate one second to get the hell out of dodge as soon as Count Olaf threatened her, and somehow got the Baudelaires to scare her out of a cave in the middle of a hurricane without telling them about her snack she just ate, leading straight to her death. Josephine, with all your knowledge about the Lachrymose Lake and its leeches, you couldn’t have said hold up for like 30 more minutes because of the possibility of realtors?? Come on girl.

Fantastic Sunny Moment of The Wide Window: Sunny going in to retrieve the keys to the shipyard from Count Olaf’s troupe member and biting off Captain Sham’s peg leg, revealing that he is Count Olaf. Someone is getting more tenacious.

Overall, Lemony Snicket’s goal with the first three novels (and ultimately the entire series?) is that happiness is short lived. From what I remember in the later installments, it doesn’t get easier. But the children learn how to find solace even amongst a sea of unfortunate events. At the end of the first three novels, the Baudelaires end up in the same situation, alone and in need of a guardian. But they still have each other, which is a blessing on its own.

Hopefully you’ll join me for the next nefarious installment, Books 4-6! Presented by “Harry Potter and the Reread Project” We left Harry, Ron and Hermione directly after one of their acts of fundamental heroism: during...

A Wedding and a Break-in The First of the Final Goodbyes

And Everything Keeps Getting Worse