On “Specter of The Gun”, Team Arrow investigates a shooting against the Mayor while we find out Rene Ramirez’s/Wild Dog’s origin story.

Our episode starts very ominously with an unusual pre-title-card sequence: several guns are being loaded and put on a black bag. This is picked up a little later as Mayor Oliver Queen has just given a position of Deputy Mayor’s Assistant to Rene Ramirez in order to help out the Deputy Mayor Quentin Lance…a decision that Thea Queen, making a comeback after my assumption that the actress had left the show, is not too excited about it.

Nonetheless, a man enters the City Hall with the bag and starts shooting everywhere. As he arrives at the Mayor’s office, he doesn’t appear to be overly eager to kill anyone, mostly firing at walls and furniture. Then, as he proceeds towards other rooms, he hits several other people and killing some of them.

The flashbacks take us to the late season four and a seemingly happy Rene. He is married to woman named Laura and has a daughter named Zoey. He is taking them to a hockey game, but Laura decides not to tag along due to a “headache.” Rene takes the chance to ask whether she is doing drugs again while pulling out receipts—bag of coke—he found taped behind the bed frame. Rene gives her an ultimatum: get rid of the drugs or get out of the house, and finally leaves with Zoey to the game. 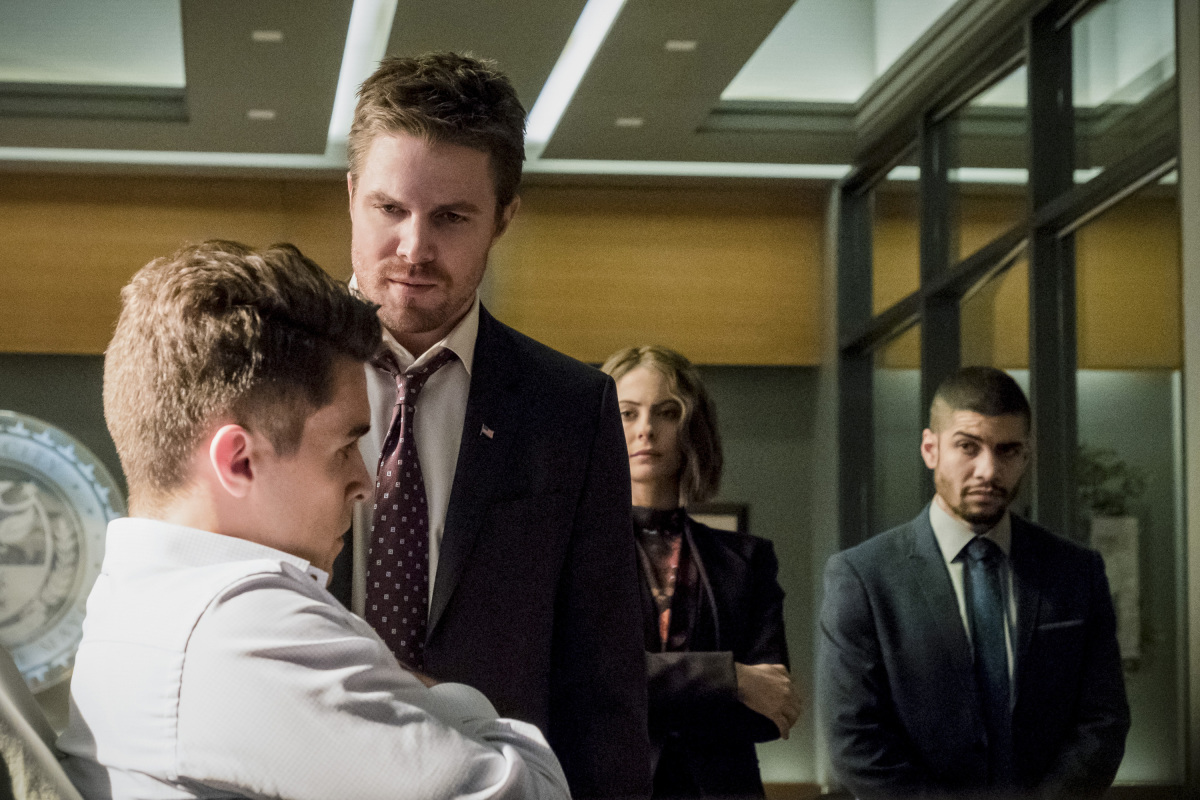 As the shooter escaped City Hall, they access the damage: the DA Adrian Chase was shot along several others who were taken to the hospital. Sadly, five people instantly died and not long another two from their critical wounds.

Right about now the show starts on a back-and-forth about gun control and people’s stances, but manages to remain perfectly balanced on top of a fence: it goes throughout all the episode and accomplishes next to nothing. I’m still not sure if the Arrow is pro-gun control, but didn’t want to piss off their opposing audience with the fear of losing ratings or the other way around.

On that note, there was a couple of nice points. First, thank you, Arrow¸ for spelling out that people with a dishonorable charge from the military can’t carry firearms in public: some characters kept pointing out that Rene, who opposes gun control and says buying a firearm is easy, was with one throughout the episode with an odd look. Also, Curtis, in favor, said something very true:

Curtis: I don’t have any problem with your right to bear arms, so long as it doesn’t conflict with my right to, you know, live.

Rene: Are you kidding me? Look at what we do, man. Our whole life is violence!

Curtis: I’m not talking about what we do to protect this city. I’m talking about the fact that as a black man, I am three times more likely to be killed by a gun than you.”

This sort of point/counterpoint dialogue goes on during the entire episode as they even have the former detective Quentin be in favor of the control while former cop Dinah Drake be against. Later on, it’s Oliver against a councilwoman and, again, it hardly accomplishes anything in my opinion. 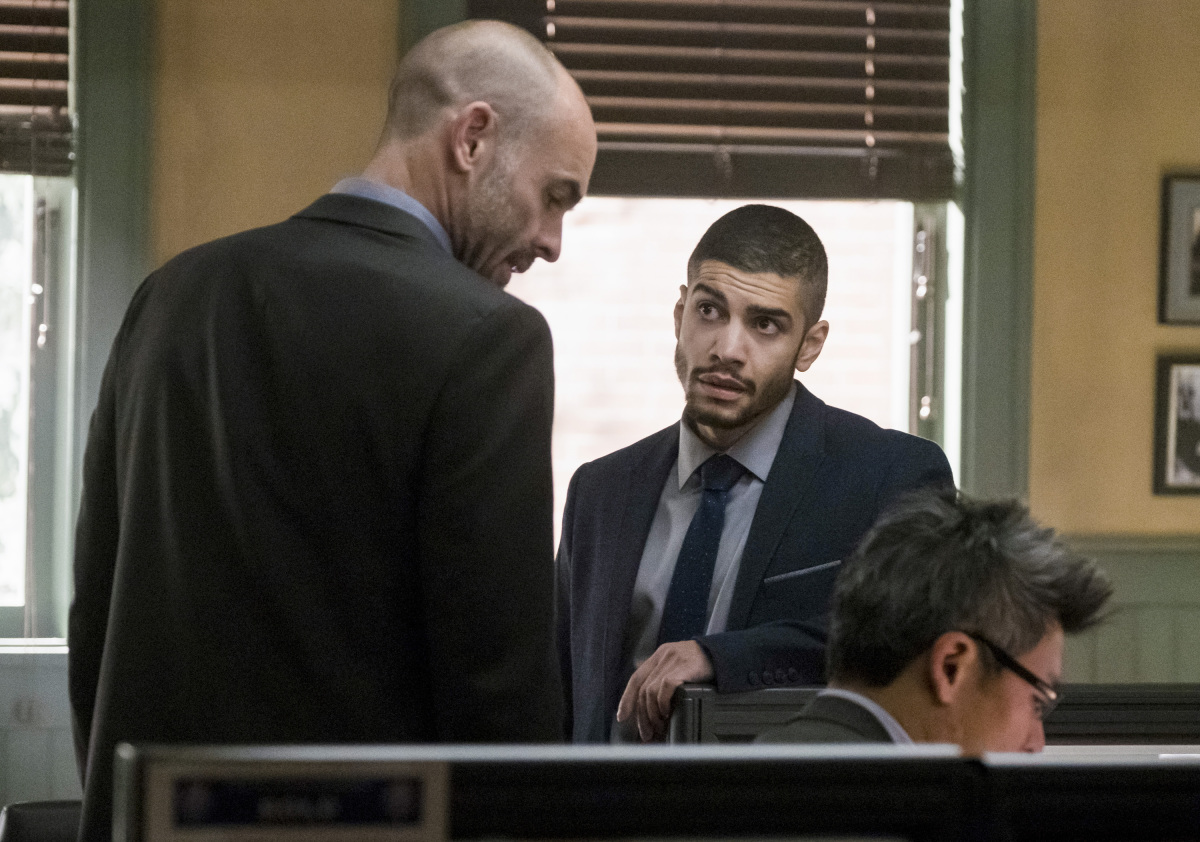 Nonetheless, Team Arrow, taking the issue with the shooter with its own hands, find out the identity of the the shooter: he is a normal guy who lost his family to another shooter a long time ago and has since gone AWOL. He also used to be very vocal about the Star City Gun Registry (SCGR) which got dismissed by the city’s lawmakers during the previous administration (which I’m kind of curious as to under which mayor this happened because Arrow’s history with mayors has been, if I recall correctly, a total damn mess since season one).

Oliver and Quentin do a press conference which ends on Oliver having basically no spine to stand for anything, giving umbrella answers that appease extremely no journalist whatsoever. He seems to lean towards a registry, but doesn’t know enough politics to go about it as a baby mayor. Thea and Quentin tell him that it is his role in that cabinet that can change the game, so he decides to meet with everyone who had a say on the SCGR and shot it down.

He ends up meeting a councilwoman who killed the SCGR previously and is extremely by the books on saving the people’s rights to bear arms. However, she is taken about by Oliver’s tenacity—he is serious about getting set of limitations that won’t disrespect constitutional rights—as he says both of them will not leave this office until they reach a ground pleasantly enough for the two. 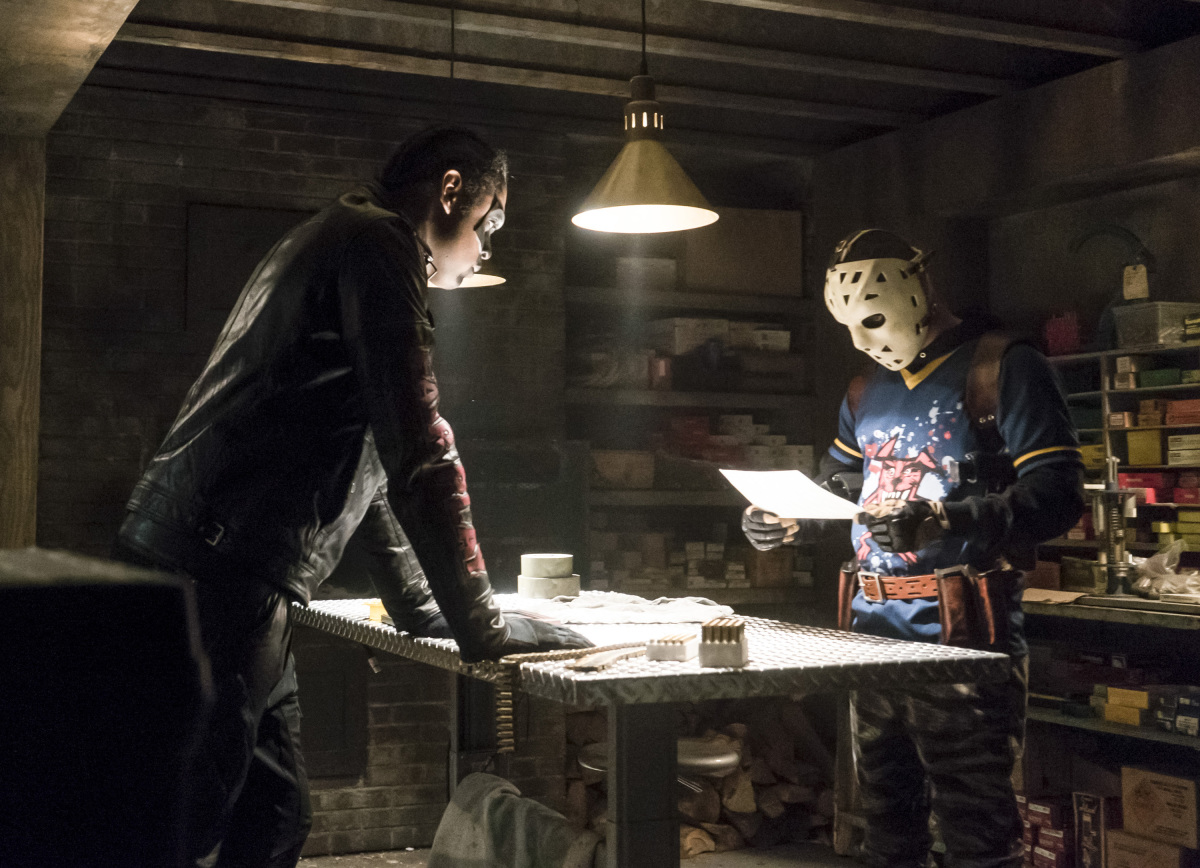 In the meantime, Curtis and Rene get an address for the shooter, but find it empty. However, there’s a floor plan there that Rene recognizes as the city’s general hospital. He calls Oliver who leaves his meeting with the councilwoman abruptly…joke’s on her.

More flashbacks: while Rene was at the game, a drug dealer invaded his house to get some payment from the wife, Laura. He finds him holding her at gunpoint. Rene makes a move to take his own gun from his vault, but Zoey comes in and screams. Rene shoots the dealer while he falls to ground making his weapon fire against Laura, killing her.

At the hospital, the shooter comes in with the bag. Prepared, Oliver meets him in a corridor and talks to him. The shooter says that he didn’t fire against the Mayor because he needed him to pass a new gun control law based on this incident. He blames himself from what had happened to his family because of toxic masculinity (“Isn’t it a man’s job to protect his family? Isn’t that why we have guns?”), despite that one shooter having a legally acquired gun.

Oliver tells the guy that he killed seven innocent people at City Hall and, amazingly, this sentence seems to reach the shooter like an original thought. It’s pathetic: it feels like it NEVER FUCKING OCCURRED to him that he was MURDERING INNOCENT PEOPLE exactly like his family! So, the shooter makes a move to kill himself, but Oliver talks him down and he is taken under custody.

Now that that problem is sorted, we are transported to City Hall again where Oliver and Rene (who Learned a Lot From Curtis, But Not That Much™) present the councilwoman with a Freedom Bill which, in Rene’s own fucking words, is “nothing that makes it harder to buy, own, or carry a gun, and it also doesn’t prohibit people from protecting themselves”. So, basically, from what I got, does nothing? I mean, seriously, is the bill supposed to only have a list of names of people who have *legally* bought weapons and that’s it? Huh. Okay. No stricter regulations. Gotcha.

The councilwoman seems pleased with the Freedom act, but says, in a pissy and catty tone, that she will “extract a political prize out of this” whatever this means. 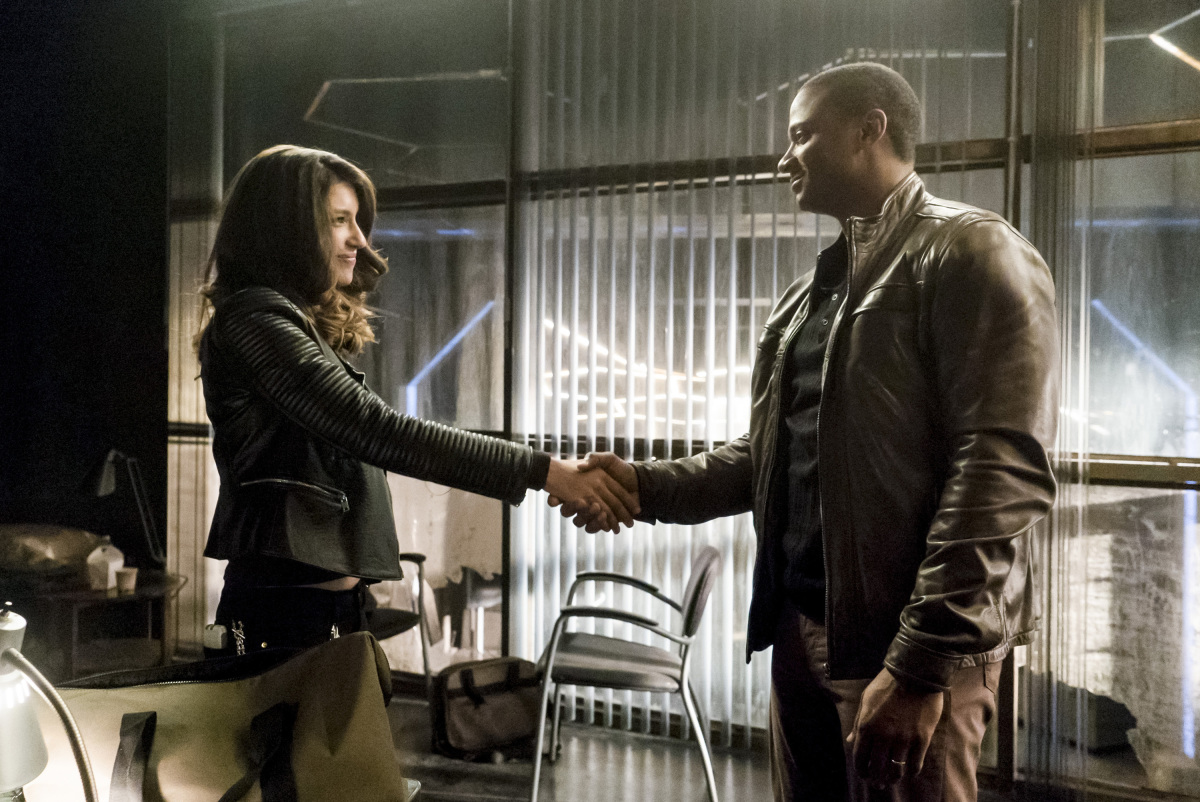 We are told that due to the shooting, he lost his daughter to the foster system and, upon seeing the city come together as one along the Green Arrow against Damian Darhk, decides to dress up as a hockey player and SHOOT PEOPLE AS A VIGILANTE. Speaking of Vigilante, shout-out to his cameo in the episode, reminding everyone that he is still on the loose from early season five.

I saw a lot of praise towards the episode and some other reviewers that, thankfully, felt more like me: this episode had potential to tackle on something serious, but it didn’t do enough to establish a position. Some people said that “Specter of The Gun” was too preachy. In my opinion, it wasn’t preachy enough. Let’s all take a moment to remember that just LAST YEAR, a guy shot up a latinx queer dance club, so I apologize if I come off too unsatisfied with Arrow’s lack of ability to show more than subtext on its position against gun control, despite some bright notes and lines of dialogue and at least an intention of doing so.

All of the rhetoric to show both sides and ideas is met with absolutely no critique towards Rene and Diggle who use guns on a daily basis—I mean, Rene gets critiqued on his position against the gun control, but no commentary on his usage within and before Team Arrow because he is good guy with a gun.

Nonetheless, I’m slightly more optimistic for next week as the Gotham City Sirens Star City Sin-Eaters made up of China White, Cupid, and Liza Werner break out of prison to fuck shit up. This episode is both written and directed by women and two of the three villains are WOC, so color me excited.