Well, some might say the twist was disappointing. Unearned, even. Especially because it came out of nowhere, there was no leading in to it, and it came only to serve as a Shock™ given the context of the scene. Still, somehow, it actually worked? So, let’s dive in this week’s Arrow titled “Fighting Fire With Fire” as Oliver’s Mayoral career is at stake for an impeachment is called upon!

After last week’s leak to the press about Oliver ordering the District Attorney Adrian Chase to cover up Det. William’s Malone murder by the Green Arrow, the Mayor is facing a call to impeachment by the City Council, taking a lot of heat after his promise to Make Star City Better (and actually doing it). Ollie proposes to his team that he will come forward with a version of the truth (that doesn’t include the Green Arrow’s identity revealed), but Adrian asks to be the pig up for slaughter, even handing out a letter of resignation which gets denied as Oliver asks Chase to be his lawyer. 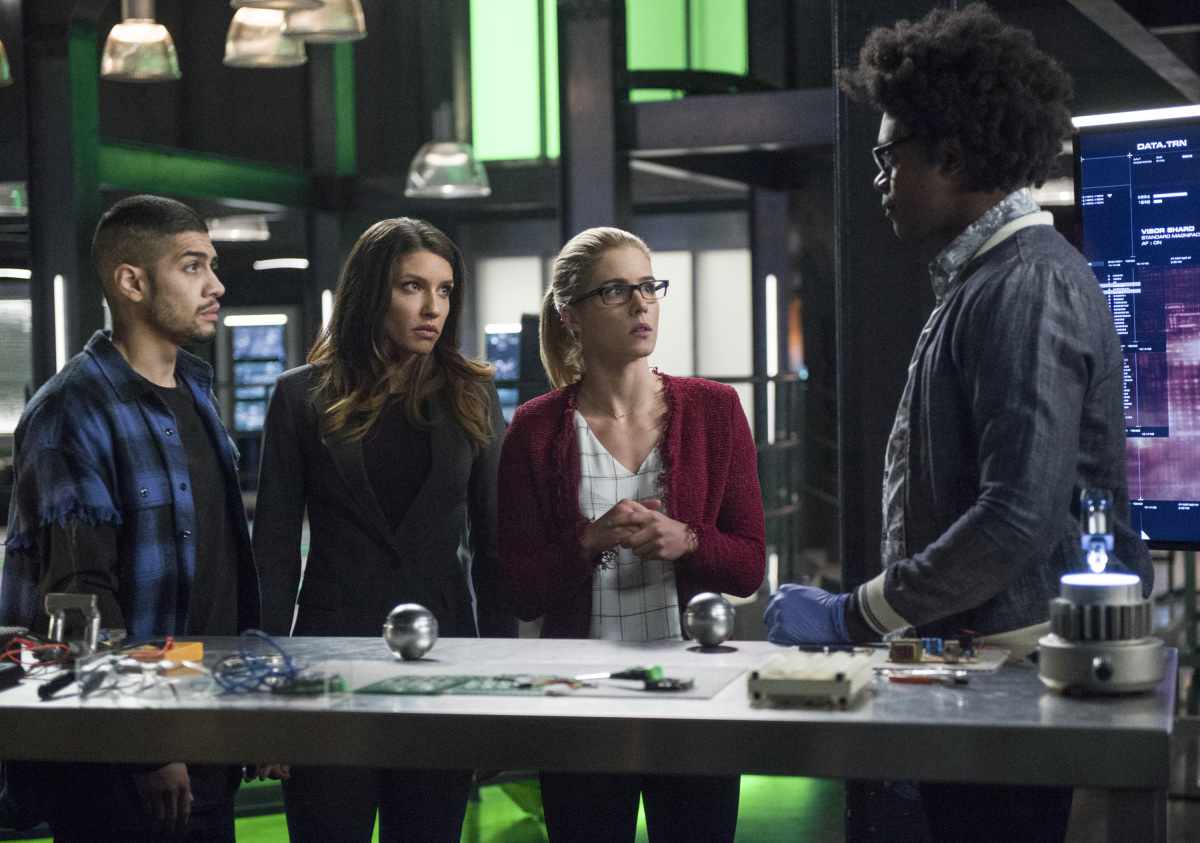 Back at the Arrow Cave, Curtis is finally working on his Mr. Terrific Balls (yes, I’m calling them that with the capital B, thank you Rene for the terms) which have been teased ever since the character’s introduction last season. The devices work together and can probably do a platitude of things, most likely falling under a wide scope of plot saviors for the series—kind of like Cisco’s powers in The Flash where can he do new things as the story demands. Also, Oliver asks Felicity to deal with the Susan William’s situation, fixing everything for the recently discredit journalist.

Oliver’s trial starts as, apparently, impeachments can develop overnight. But it’s okay, my disbelief is still suspended. The first day doesn’t go well as depositions from the forensic doctor sheds some truth on Oliver’s and Adrian’s involvement while Captain Pike is not sure any more about what the Mayor told him about Malone’s murder last week.

Diggle starts serving as the voice of consciousness (think Pinocchio’s cricket) to Felicity about the use of Pandora, the data cache she got from Helix, and how morally/ethically incorrect what she is doing probably is. 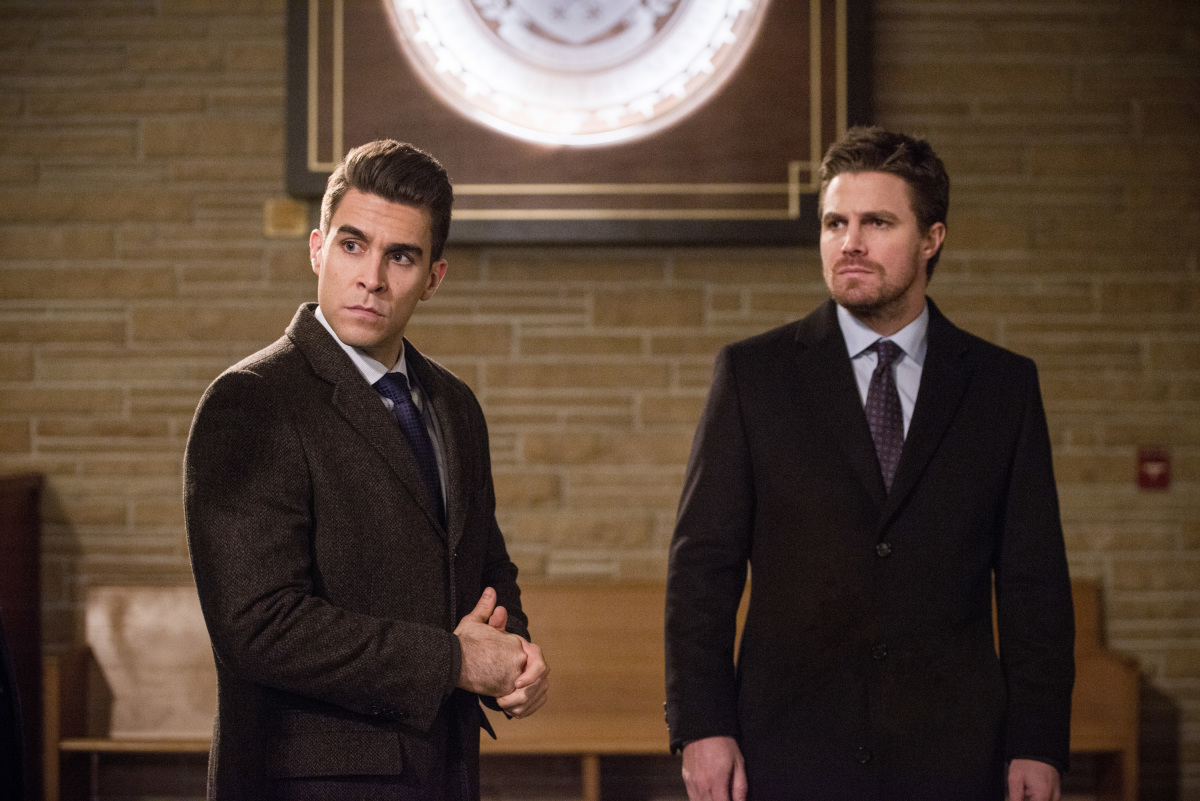 After the trial, Oliver shares a limo with Dinah, Thea, and Quentin when the Queen sister suggests they throw Det. Malone under the bus, calling him a crooked cop which is, in fact, a great and pragmatic idea, but Oliver’s morals are above this. Keeping up with the “Oliver Queen & His Limoes” curse, nicely lampshaded by Thea, they are surprised by a sudden attack by the Vigilante that causes a car crash. Everyone survives, obviously, and Dinah is able to blast the villain with one of her powerful screams. The police arrives and Vigilante flees.

As Oliver might be concussed and sent to the hospital, Thea asks Felicity for some dirt on the one councilman whose vote is up in the air and can decide her brother’s administration’s fate. Felicity gets some about how he faked his wife’s suicide.

Dinah finds a piece of Vigilante’s iconic visor on the ground and tries to get it to the Arrow Cave, but is intercepted by a very suspicious Adrian Chase who takes the piece to log in the police’s computer himself, leaving her empty handed.

We see the Vigilante doing some vigilanting atop of a random building when Prometheus confronts him about how he will be the one to kill Oliver Queen. The two fight, Prometheus takes the upper and pushes him off the fucking building. He takes off his mask (for… some reason?) and the audience gasps because Prometheus is Adrian Chase (gasp, everyone!!!!).

At the SCPD’s headquarters, Dinah is able to steal back the piece of Vigilante’s visor, but she is spotted by Adrian who either couldn’t’ do anything at the time or just deliberately let her (it’s unclear). She takes it to Arrow Cave where Curtis & His Balls use the piece to track down Vigilante. 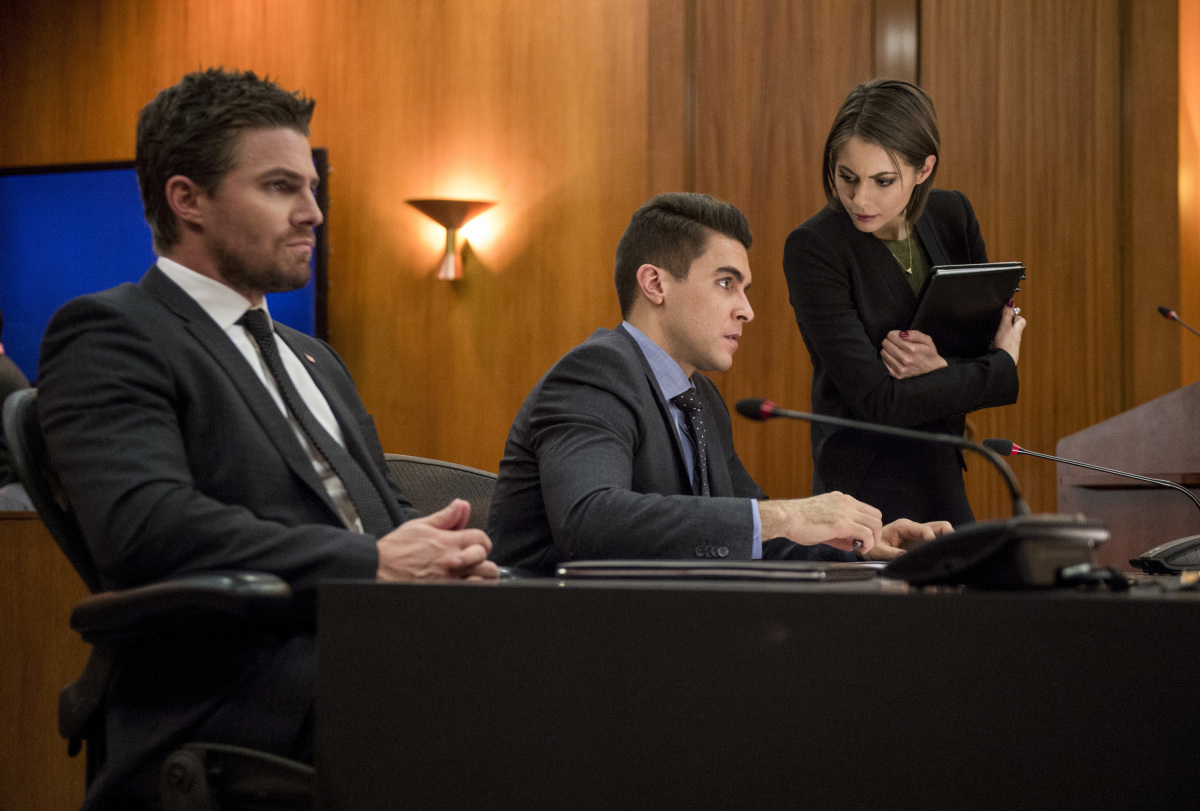 After Oliver was refused a testimony at his own trial (what? Is that a thing?), he decides to the speak to the people at a press conference where he plans on saying it was all the Green Arrow’s fault. As one would expect, Team Arrow tracks down Vigilante (who is still alive by the power of Arya Todd) to the building next to the City Hall because the masked Mary Sue plans on striking out Oliver when he does his press conference.

The Team is able to avoid the assassination as they take a beating from Vigilante who could very well be a metahuman for his over the top abilities and Oliver is able to finish his speech without interference: he blames the cover up on the Green Arrow who suddenly became a cop killer, but because of his inspiring vibe for Star City, Ollie didn’t want to shatter everyone’s dreams. The Mayor calls him a rogue and disavows him.

Susan tells Oliver that she got her job back after a hack anonymously comes forward for the files that were found in her computed. Adrian calls Oliver a friend (what a crocodile, oh my God) as he comes with the news that the impeachment didn’t come to success after the press conference.

Thea quits her work at the City Hall because she had gone too deep in politics, felt broken and needed time to fix herself. Curtis, who was all hopeful he would get back together with his husband, gets the divorce papers as Felicity, inspired by Oliver, decides to take on a more integral role at Helix. Adrian stops Susan at night and intimidates her with a conversation about life or death. 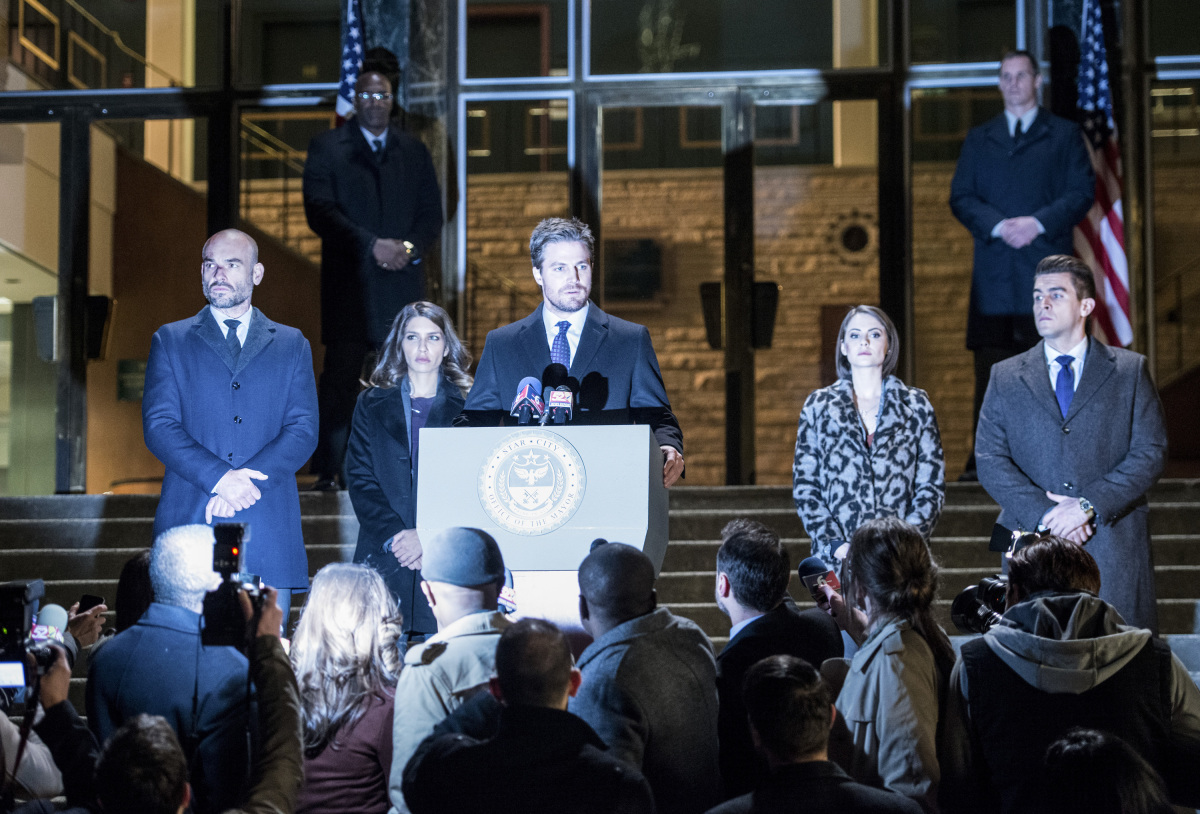 Yet another week, the Flashbacks amount to basically nothing, so, to sum it up, after we were left with Gregor pointing a gun at Anatoly’s head, the latter invokes some Bratva tradition that postpones his death for an unofficial trial. Oliver digs some dirt on Gregor and brings it to the Bratva reunion which has two opposing teams (one lead by Gregor and one by Anatoly and Oliver) firing at each other.

While this season has been better than the previous one, it is not quite getting me there enough. I admit, the reveal that Adrian is Prometheus shocked me, but it felt unearned because it came out of nowhere and served only the purpose of him not being revealed as Vigilante, his comic mantle. Yeah, even the executive producer said last night that they chose Chase for Prometheus just for the sake of the twist. So much for all the “Tommy is Prometheus” theories, aye? 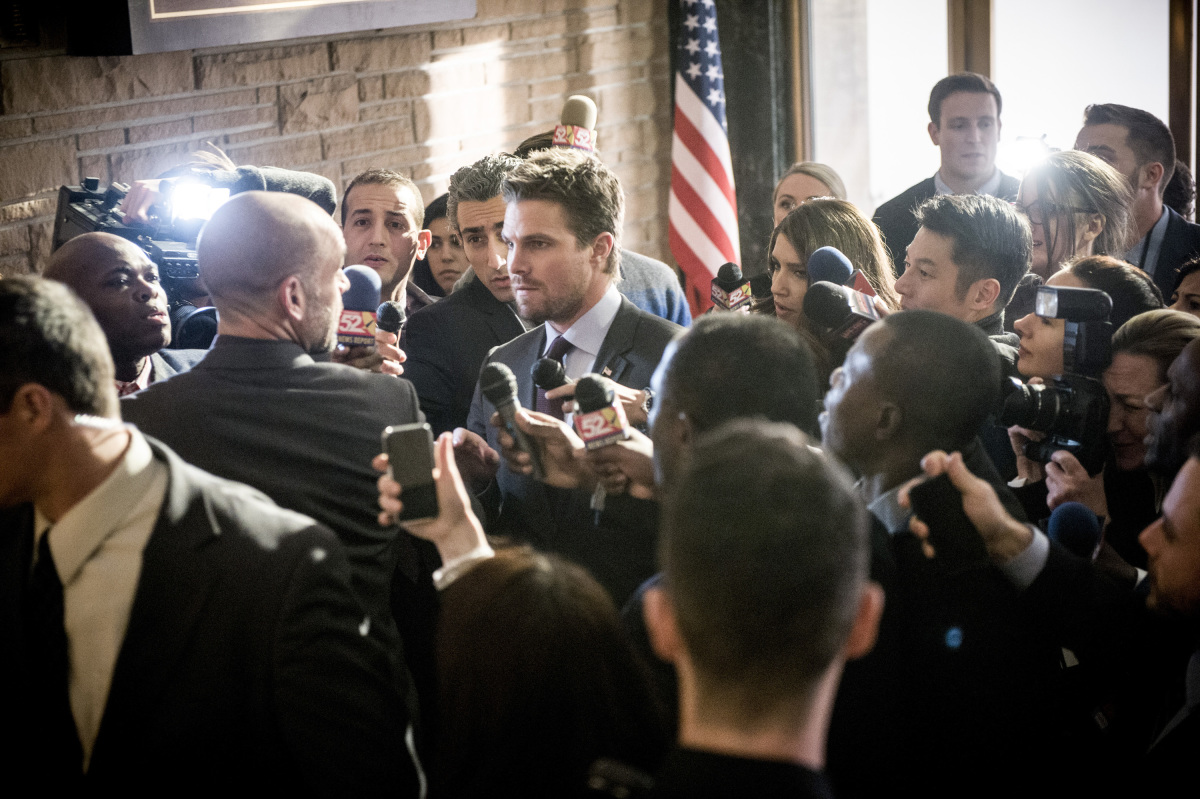 Other issues I had with the episode were about Vigilante’s incredible Plot Armor and über advanced skills as in he is better than everyone on Team Arrow, but worse than Prometheus, who took him out easily and THREW HIM FROM A BUILDING! The plot armor is so big it’s distracting. At this point, there are not many people who could, realistically, be Vigilante now that they changed his comic identity.

There are a couple theories out there that claim Vigilante and Prometheus are the same people and Adrian has Dissociative Identity Disorder, which would explain it somehow, but it’s highly unlikely because Adrian was at the press conference while Vigilante was fighting/beating the shit out of Team Arrow.

Also a bit odd was the whole Thea situation, because the character, which I’m very fond of, keeps doing these charged, yet effective decisions that are seen as problematic by Oliver leading up to her resignation. I wonder if this more out of any wishes Willa Holland might have to pursue other jobs because if she’s not in costume anymore and won’t be working closely with Oliver, there’s hardly anything left for Thea to do while being integrated with the plot.

Meanwhile, the Russian flashbacks keep amounting to barely NOTHING. If you scrape the barrel, you can pick on Oliver creating connections which have been useful in the present and Talia Al Ghul’s presence which was amazing and I miss her; Lexa Doig brought something extra nice to the screen. We know that the writers don’t plan these flashbacks early on during the planning phase according to Stephen Amell, but still, they are trying to stretch this whole Bratva thing too much—I can barely tell the difference between Kovar and Gregor! Just take him back to Island again as the five year period comes to the end, and be done with it.