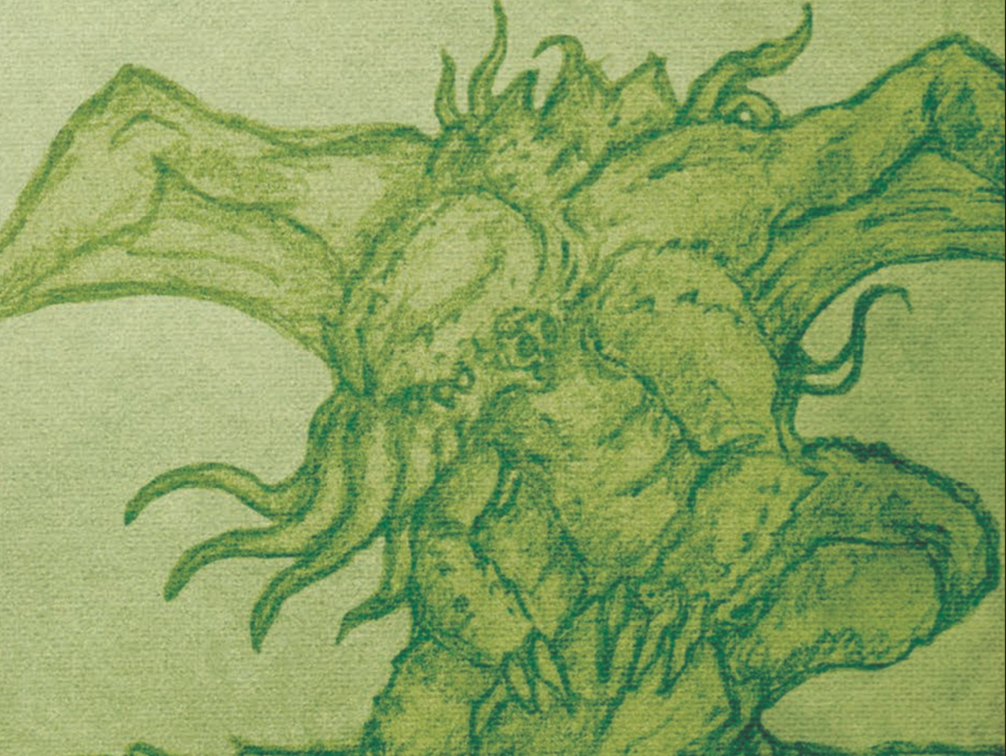 Over time, various creators have brought their own take to the Cthulhu Mythos, especially in the TTRPG space. Sandy Petersen is a notable example, as the creator of the first edition of Call of Cthulhu. Petersen’s self-titled company has continued to create offshoots of the Cthulhu Mythos, and these credentials certainly give some weight to this product. It’s safe to say that Petersen is well-versed and able to give a comprehensive look at these creatures. Petersen Games’ The Anatomical Guide to Lovecraftian Horrors is his company’s latest work that pulls from the Cthulhu Mythos.

Before we dive into the details of this product, it is important to look at the context surrounding its influences. The works of H.P. Lovecraft, as well as the Lovecraft Circle, are undoubtedly influential across multiple genres and mediums. Yet, it is also well-known that Lovecraft’s racist beliefs permeated his works. The broader Cthulhu Mythos that was inspired by his works has gone through many eras of expansion and evolution.

When pulling from the Mythos, it is incumbent on storytellers to reconcile this history and find ways to divorce the compelling aspects of cosmic horror from the genre’s racist beginnings. The Anatomical Guide to Lovecraftian Horrors provides a way to pull creatures out of the Cthulhu Mythos without having to engage directly with Lovecraft’s works. Whether it is removed enough from the original works is an individual calculation that’s necessary when considering a product like this. My goal is to cover the general aspects of this book and let you decide if this form of cosmic horror is right for you.

The Anatomy of the Cthulhu Mythos

The Anatomical Guide to Lovecraftian Horror is a story-focused guide to the Cthulhu Mythos. The guide is written in-character, allowing for easy immersion for any TTRPG GM looking to pull these creatures into their game of choice.

This book could work well for any GM looking to get useful overviews of various creatures of the Cthulhu Mythos, but it should be noted that it is not written like a full-on bestiary. To clarify, this is not like Petersen’s other product, Cthulhu Mythos, which has stat blocks compatible with D&D 5e, Pathfinder 1e, and The Dark Eye. This product, on the other hand, has no mechanical implementation of these creatures. The lore is technically system agnostic, and perhaps that flexibility is useful. It would still require the GM to do the legwork to build a mechanical framework for the creatures in their chosen system.

The book divides the creatures with the following helpful classifications: matter-based, interdimensional, multidimensional, and transdimensional. The introduction section does an excellent job of explaining these divisions as well as providing an overview of how these creatures are perceived in the scope of the Cthulhu Mythos.

Applying a Scientific Eye of the Unknowable

The writing in this book has a unique way of looking at the various creatures that it presents. As noted before, this is not written like a traditional TTRPG bestiary. Although there are descriptions of how these creatures interact with humanity, it instead endeavors to, “…illustrate some of the most fascinating ‘”lesser”‘ creatures of our universe, not as monsters, but as natural beings that exist in our own plane (or dimension) or different ones.” There are surprisingly grounded, to the extent that is possible with incomprehensible horrors, details included in this volume. This scientific-like lens means that the book reads more like compelling zoological research than basic lore.

The book intelligently refuses to handwave any finer details about the creatures with a broad supernatural explanation; instead, it notes, “What’s more, magic has nothing to do with them, as their various physiologies are gradually unveiled by our advances in anatomy, biology, chemistry, and physics, among many other sciences. Of course, our knowledge is infinitely small and incomplete, but as  we learn more, we make better questions and find better answers.” This train of thought is particularly useful if you’re running a game that relies more on investigation and study rather than on directly fighting cosmic creatures.

If you’re already familiar with the Cthulhu Mythos, there’s a good chance that you’ll find a recognizable collection of creatures in this book, from Elder Things to Ghouls. Due to the well-conceived classifications, the book is able to cover creatures that would be hard to otherwise group in a book with this pseudo-scientific stylized writing. The descriptions themselves have a unified layout that still leaves room to highlight the differentiations between the distinct classifications.

The artwork of the dissection provides an uncommon visual representation of these creatures, while also reinforcing the in-character writing. The artwork also helps illustrate the scale of each creature, which works well in conjunction with the heights and weights of the listed creatures.

This book ultimately does a great job of capturing the essence of cosmic horror, filtered through an unusual perspective. It does pull heavily and directly from Lovecraft’s works, but strictly in the sense of adapting Lovecraftian creatures. This could be a strong jumping-off point for anyone who wants to integrate cosmic horror into their TTRPG campaign or other storytelling. Beyond that, it is an enjoyable read for fans of weird fiction. It, unfortunately, comes with the baggage of Lovecraft’s legacy, and that makes it harder to give it a blanket recommendation. Perhaps there is some value in finding ways to extract the creatures from Lovecraft’s work, while finding ways to leave the author’s legacy in the past.

You can grab a copy of The Anatomical Guide to Lovecraftian Horrors on Petersen Games’ website, which is on sale for $23.99 at the time of the writing of this article. Trigger Warning for Disturbing Imagery and Blood As a fan of horror, I was excited to receive a copy of Lamentum, a gritty pixel...

MollyAugust 23, 2021
We use cookies on our website to give you the most relevant experience by remembering your preferences and repeat visits. By clicking “Accept”, you consent to the use of ALL the cookies.
Do not sell my personal information.
Cookie SettingsAccept
Manage consent