Slow-paced and atmospheric, this episode packs quite a bit more than a first listen would lend you to think. And most of it is sad. For a podcast about a woman driving alone on the roads, Alice Isn’t Dead hasn’t often been quite as solitary as this.

After the previous episode being so heavy in predictions of doom, “Abandoned Places” handles the aftermath of such ponderings, relying mainly on empty landscapes of post-war distress and solitude. Very low in action, asking always even more questions that find no answers, the episode is a short road trip of its own. Once again, a very cohesive episode and a solid set-up leading up to the upcoming storyline involving one of our favorite character from season one.

The intrigue, which started right at the beginning of the season, is picked up again as Keisha starts to follow the commander from Bay and Creek again. As she drives and as she follows her tracks, she also reminisces. Before everything that happened, before Alice left, Keisha and her went on a road trip vacation through Croatia and Bosnia. Keisha remembers how they rode all the way along the coast and the mountains, surrounded by old buildings left in shambles by the war. Her quest for the commander through the roads of America, and later down dirt paths leading to secret headquarters, is mirrored in the memories she can’t help bringing up again.

But just like the trip through Eastern Europe holds constant reminders of the war that exploded within itself, her mission is also ultimately about the conflict between Thistle and their victims, between the US government which is allied with the monsters, and the devoured people left behind. Keisha ponders on the consequences on such things, conflict and war leaving behind the remnants of empty places. A conflict she was too late to witness in Bosnia, and which she is not allowed to take part in in America, as the commander throws her out of the headquarters, not without mentioning Alice. Oh, and Sylvia’s back. Curtain on this episode.

It’s not quite surprising that Keisha would eventually reach the place she is in during this episode. Oh, I’m not talking about the headquarters (although that too). But rather, in a narrative that always allows for Keisha to be vulnerable and express her fears, it’s only expected that the trauma of all the violence and conflict she finds herself witnessing would catch up to her. Through all her descriptions of the past war in Bosnia, Keisha’s soft heart comes through so clearly. Although she never openly gives a comparison to the situation in America (whether the fictional one of Alice Isn’t Dead or real life America), the eerie description of the empty buildings, of the old tensions, is extremely applicable.

Once again, Alice Isn’t Dead is political without really being so; this episode is incredibly implicit, focused on external observations that tell a story beyond what the eye meets and what Keisha says. But the real, deeper message is not one of outrage, or even necessarily an inspiration to be better as a society, but simply the evident tiredness at a society divided within itself, at hatred directed at a member of your own community.

“Imagine one day, all of your neighbors, maybe families that had been your family’s neighbors for hundreds of years, tell you that you are no longer their neighbor. Maybe they don’t tell you with words but with violence.”

Keisha, an extremely vulnerable member of society as a mentally ill black lesbian, is here in utter lack of understanding at a society that thrives towards violence, without anyone handling the aftermath of human conflict. She is painting a rather negative picture of humankind in her stories. From the deep poverty in the region she drove through in Europe to the solitude of the American roads, she’s feeling discouraged.

Even though she keeps her drive to go (because where else to go when your wife is missing, except try to solve the mystery that she is also trying to find out?), she seems increasingly impacted by the helplessness she observes around her everywhere she goes. She may well try her best, keep going until the very last second, but her mindset is becoming pessimistic. At the end of the episode, she is even expecting the commander to come to her and kill her, and is ready to accept that fate peacefully, if she can’t change it. She is feeling a lot more compliant to her doom than last episode, but indeed she underlines that she has maintained her drive to keep going only because she is afraid of the consequences on innocent people if she doesn’t.

“Every time I think of hiding somewhere, of giving up my search into Bay and Creek, I see a black boat sinking in the mouth of a river.”

Most of the episode focuses on actual abandoned places, houses in her memories from Bosnia, the empty farm that hides the headquarters of Bay and Creek in her actual life, but the human aspect of abandonment is constantly emphasized. The solitude of these places is mirrored in the protagonist. Keisha is no longer talking to Alice in this season, not really, or not always. There is a distance growing between them that goes beyond the simple factual distance, the fact that Alice left. She is feeling more and more abandoned, even to the point that she openly refuses to hear anything about Alice when the commander of Bay and Creek mentions her. Whereas last season, she would beg for answers any time she could, this time she doesn’t even bother asking the questions to the commander because she knows she won’t get them. Even her control of her own actions, which she reaffirmed several times last episode, is fading away.

“I did nothing. There was nothing I could do at that point.”

However, in all this solitude and abandonment, there is also a reminder of the good things peppered across the emptiness. The episode is incredibly double sided for this. The grim is very grim: empty houses riddled with bullet holes, secret headquarters where Keisha is threatened to be killed off, the random encounters along the roads of Bosnia that frightened her back then. But then there are several little moments in the episode, maybe very short, that remind the listener and Keisha most of all, that there is still a good side to life and that not everything is lost.

“There was a field of grass, and in the center of that field was a single tree, frothing over with white flowers. The sunlight hit the three just right, and it seemed to catch fire, every flower a frame. It was mesmerizing, a reminder that the miraculous can emerge suddenly from the happenstance, and in places you would never expect, like an overgrown field somewhere in Georgia.”

The locals selling honey in Bosnia, the beautiful tree in the field, the beautiful synagogue that used to be in Poland… This really shows how sensitive Keisha remains even during the hardest times of her story, how her disconnect from a violent society is only because she is so kind herself. She’s still thinking about positive things in the midst of the awful horror, she’s still seeing the beauty of the world, even when she’s feeling defeated and negative, at her lowest.

And even more importantly, in a dark storyline, this episode also contains several instances of genuine kindness between people. This is something that is greatly needed for a narrative not to be too Edgy™ and Dark™, which can become quite redundant and nihilistic for the consumer. A local man in Croatia driving them personally to get them the best car he could find, the commander choosing to have mercy on Keisha and spare her life, with the promise of never coming back to the secret headquarters of Bay and Creek, and above everything else: Sylvia.

I mentioned before how a character is really best defined when you have its opposite to compare them to. Whereas episode one drew many comparisons between Keisha and Officer Thistle (or rather, pointed out how completely different they are), every interaction that Keisha has with Sylvia does the exact same thing now. Sylvia couldn’t have come at a better time. Just when Keisha was beginning to turn more sour at the events around her, just when she was starting to be less hopeful, Sylvia is the bundle of energy and hope she needed.

“I had no idea how much I missed the company until I had it.”

Even from basic interactions, Sylvia appearing in her truck after months of being apart, the affection between them is so apparent and heartwarming. Consistently with her characterization from last season, Sylvia is impulsive, daring, a little bit cheeky, and so extremely youthful. The perfect cure to Keisha feeling disconnected from a humanity that seems to be so needlessly violent. Their interactions are always pushing Keisha to keep in mind her goals of protecting innocent people like Sylvia and I think that seeing her again helps her to find that light back inside herself. The Sylvia-ex-machina at the end of the episode also serves to show how similar they can be in some aspects. After a whole episode of Keisha following the commander’s tracks, it just so happens that she was in turn being followed by Keisha. There is something smart and kind about both of them and this is going to be a great influence on Keisha. Hopefully Sylvia stays longer than the two episodes of last season!

This episode raises so many questions without calling them into attention all that much. What is Bay and Creek doing with their underground secret headquarters? What murder mystery is Sylvia talking about? What is Alice’s relation to Bay and Creek? Little by little, we’re uncovering some truths but they come with so many additional questions that it seems we will never get a clear picture.

However, the descriptions were extremely well done in this episode–it is an incredibly atmospheric episode, one of the best. Keisha’s numbness to the violence around her, her discouragement, is heartbreaking, which makes her reunion with Sylvia all the more sweet! I’d been hoping to hear from her again.

The end of the episode implies that there will be a storyline between the two of them, solving some murder mystery, and I cannot wait to hear how it all ties back into the storyline of Bay and Creek and the Thistle Men. 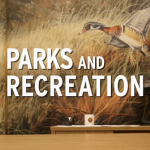